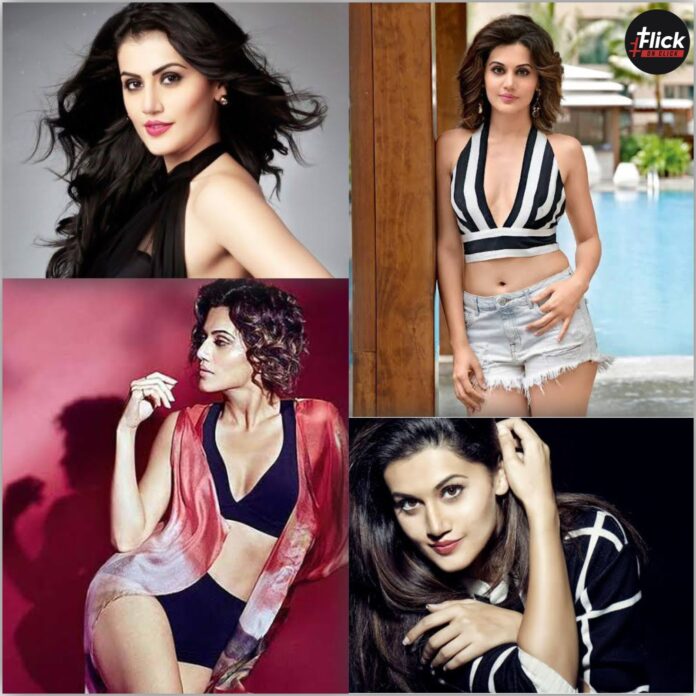 Lovely Taapsee Pannu is a South Indian actress Starlet and model who began her career as a supermodel. She made her Bollywood entrance in Chashme Baddoor, alongside Pakistani star Ali Zafar, and was also featured in Akshay Kumar’s Baby. Taapsee Pannu, a Jatni, was educated and raised in New Delhi. Taapsee got the opportunity to join the silver screen with superstar Amitabh Bachchan in ‘Pink’ after appearing in a few Kollywood and Bollywood films. ‘Pink’ is a judicial drama film that is an inspiration to women all over the world.

Taapsee Pannu’s path to prominence began with roles in women-centric films such as Pink, Naam Shabana, Shabaash Mithu, and Thappad, among others. She had worked on award-winning Telugu productions. Despite her easygoing demeanor, she has dark secrets. If you’ve been following her career as closely as we have, you’re interested in the celebrity. Flickonclick did some digging and discovered 10 facts about Taapsee Pannu that you probably didn’t know.

There are many attractive people, but few have the intelligence to match their beautiful looks. Taapsee graduated from GTBIT with a degree in Computer Science Engineering. She trained as a Software Engineer before switching to modeling and cinema. In reality, she planned to get an MBA in her profession and took the entrance examinations. However, she ultimately selected a different path. We adore a STEM-educated lady, especially one as brilliant as Pannu. The Haseen Dilruba actor is passionate about sports, and she co-owns the badminton club Pune 7 Aces with KRI Productions. Her squad is managed by her partner, Mathias Boe, and participates in the Premier Badminton League.

Taapsee is an expert at keeping herself busy. She co-owns The Wedding Factory with two business associates, in addition to modeling and spending a lot of time on set shooting movies. We’re not sure how this businesswoman manages to handle two jobs, given the amount of time both need, but she does it with elegance and style. We respect her achievement, but we hope she also takes time for herself during the celebration.

Also Read: 10 Amazing Facts about Actor Yash from KGF that will Bamboozle You

Taapsee Pannu began dancing lessons when she was in fourth grade. Her lifelong passion for athletic exercises undoubtedly aided her shift to Bollywood acting. Bollywood films have some of the most stunning and complex dance performances you’ll ever see. Pannu is perfectly fitted for a dancing role due to her traditional training in Kathak and Bharatanatyam.

Taapsee Pannu is from a Punjabi household. The actor has a junior sister named Shagun Pannu, with whom she has a close connection, which is evident on her Instagram page, where the actor frequently posts images with her sister. Pannu was recently accompanied on her recent holiday to Russia by her sis Shagun.

Taapsee remembers herself as a reckless brat as a child. Taapsee was a distinct child in her youth when most children dislike going to school. She enjoyed going to school and participating in extracurricular activities. Many of us are unaware that Taapsee’s nickname is ‘Maggie.’ The girl looks charming with her natural curls. This could be the explanation for her name, Maggie.

Many celebrities marry other actors or musicians. We imagine it gives them a lot in common. However, not everyone enjoys sharing the limelight. Taapsee belongs to the latter group. She openly confesses that she does not believe having two stars in a romance succeeds, and she is not keen on marrying a movie star. One thing is certain. This celebrity knows exactly what she desires. Perhaps this is because she dated another actor once. Mahat Raghavendra is a Tamil artist probably most famous for his minor role in Mankatha, a thriller/heist film. Maybe there’s more to the narrative, but Taapsee isn’t sharing.

Pannu didn’t initially follow acting after graduating from college; instead, she worked as an engineer before entering the entertainment world. She became a full-time supermodel in 2008 when she competed in the Channel 4 reality show Get Gorgeous.

Taapsee is known as the “Goddess of Flop Superstars” because she has worked with numerous failed south Indian heroes during the worst points in their careers. She appeared in almost ten Tamil and Telugu movies before making her Bollywood entry in David Dhawan’s Chashme Baddoor (2013). Previously, when she was given South films, she turned them down since she did not share a common language.