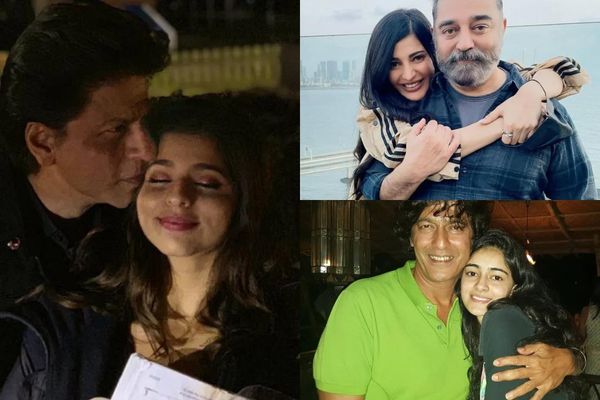 Father Daughter Duos in Bollywood are available in abundance. The Indian cinema has seen many daughters of famous celebs following in the footsteps of their fathers to become renowned media personalities. Over time many father daughter duos in B-Town have made their resounding presence feel on the big screen. Here we have counted the best father-daughter duos in Bollywood at the current moment. Mahesh Bhatt and Alia Bhatt are easily the best and most famous father-daughter duos in Bollywood right now. Alia, the daughter of the ace filmmaker Mahesh Bhatt, has made her stature even bigger than her own father in the Hindi film industry. She shares a sweet and endearing bond with her father, which makes this Bollywood father-daughter duo one of the sweetest. Sonam Kapoor is Anil Kapoor’s beloved daughter. If you follow the B-Town gossip, you will remember the epic wedding that Anil Kapoor organised for her daughter. Sonam also loves her father, and she made it known on quite several occasions. Their PDA has often covered the first page of the entertainment section of many newspapers. They are easily one of the best father-daughter duos in Bollywood. Saif Ali Khan and his daughter Sara Ali Khan‘s chemistry and bonding came to the front when they visited Koffee With Karan as guests. Their hilarious talk and Saif’s easygoing nature became the talk of the town. Even though the Vikram Vedha actor has married again, his love for his daughter has not diminished one bit. Currently, they are one of the most talked-about and famous Bollywood father and daughter pairs. Khamosh is the word we would have to listen to from these sweetest father-daughter duo of Bollywood if we had skipped their names in this list. Sonakshi is her father’s favourite, and the veteran actor has made it known to the people. They are a famous father-daughter duo who has a lot of similar characteristics. It is common knowledge that Suhana is SRK’s little princess. The actor used to take her to the IPL games when she was younger. He had often commented on her social media handles to let her daughter know he missed her when she was away from home. Suhana also loves her father back, which makes them one of the most endearing father-daughter duos in Bollywood. Kareena Kapoor has surpassed the fame and success that her father accumulated. Randhir Kapoor is a proud father who celebrates her daughter’s success. Both of them have often seen partying, hanging out and celebrating each other’s important moments. Randhir and Kareena’s camaraderie makes them one of the best father daughter duos in Bollywood. The veteran actor Jeetendra Kapoor was a phenomenon during his heyday in the film industry. His daughter Ekta Kapoor chose a different route than him and proceeded to direct the movies and TV serials instead of acting in them. Jeetendra is a proud father with one of the best personalities ever in Bollywood. Chunky and Ananya share a special bond that feels more like a friendship than a father and daughter relationship. Chunky wholeheartedly supports her and even promotes Ananya’s movie whenever he can. Ananya equally reciprocates the love she receives from her father, which makes us include them in the list of best father daughter duos in Bollywood. Shakti Kapoor, who has often played reel-life villains, is actually a real-life hero. He has immense respect and love for his successful daughter. Shraddha is one of the sweetest Bollywood actresses ever, which shows her quality upbringing. The famous father daughter duo rightly occupies a spot on this list. The legendary artist Kamal Hasaan has created a legacy which will be remembered forever in Indian cinema. He is one of the most soft-spoken personalities in the film industry, and his daughter Shruti Hassan emulates the same sense of calmness in her behaviour. They are one of the best father-daughter duos in Tollywood.

Over the years, Bollywood has made some tremendous growth in its storyline. And has gifted us with some...
Entertainment

Gangubai Kathiawadi, featuring Alia Bhatt, is released today in theatres on February 25th, 2022. The movie, which debuted at the...

Netflix has a plethora of Hindi dubbed movies but...