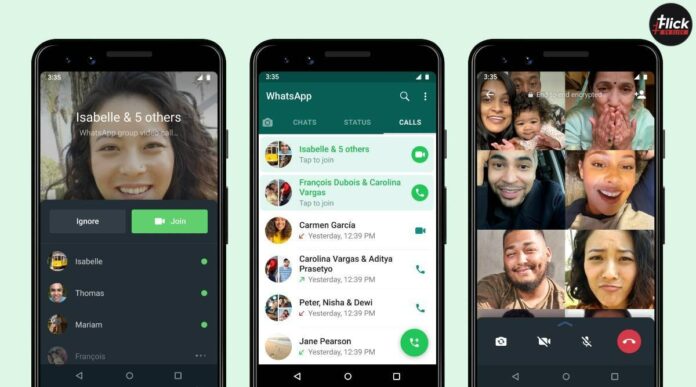 WhatsApp has finally released a new version that allows up to 32 individuals to participate in a group phone call. The Meta-owned system just issued a new upgrade for Android and ios devices, version 22.8.80, allowing users to join in group voice chats with up to 32 participants.

WhatsApp also intends to provide new features such as the ability to exchange 2GB files, reactions to specific messages, and so on. This functionality is included in the changelog of iOS version 22.8.80. According to the update summary, WhatsApp group call can now have up to 32 members. Along with the UI has been redesigned with a social audio design, speaker spotlight, and waveforms.

How Does the WhatsApp group Call feature work?

To begin a  WhatsApp group voice call, you must be a participant in a group chat with 33 or more users. If the group has fewer than 33 members, open the group chat and select the voice call choice. During the call, the initial 7 people who respond will join initially, and then the rest can be added. If a group chat has 33 or more people, select group call. Meanwhile, WhatsApp’s latest iOS update includes an enhanced version for voice message bubbles as well as detailed displays for friends and groups. In the gallery, there’s also a significant tweak for viewing media saved to preferences.

Meanwhile, WABetainfo revealed that WhatsApp is testing a new feature that allows users to edit users and choose the audience before transmitting media with a new caption view. The functionality has also been introduced to the WhatsApp Status choice. Moreover, it is now available to beta testers using v2.22.10.6. However, not all beta testers will see the choice.

According to WABetaInfo, while transferring media from a chat or submitting a status, users cannot pick different receivers in the standard version. This is only feasible when utilizing WhatsApp’s camera tab layout. However, while sending a photo, clip, or GIF, people will now be able to select the recipients. For status uploads, the recipient choices are My contacts, My contacts exclude, and Only Share with. This means that users will have more choice over who views their WhatsApp Uploads/Status.

Previous article
8 Best HP Laptops that you can buy under 40k in India
Next article
What might change on Twitter if Elon Musk successfully acquires it?
Flickonclick Team

Just about recently Whatsapp has rolled the disappearing feature update and now there's one more for you. This...
Technology

The year 2021 is coming to an end soon in the next 3 months, which implies that WhatsApp...
Technology

WhatsApp was once intended to be a replacement to SMS. However, WhatsApp is no longer solely used for...
News

Now you can book your Covid Vaccination slots via WhatsApp. Here’s how you can do that

Now you can book your Covid Vaccination slots via WhatsApp. The process of booking a slot for the...
Technology

Whatsapp Pay, one app that has been in the pipeline for quite a time, now finally ready to...
Technology

WhatsApp has completely altered the game of messaging app. WhatsApp in 2020 introduced new features and services that...