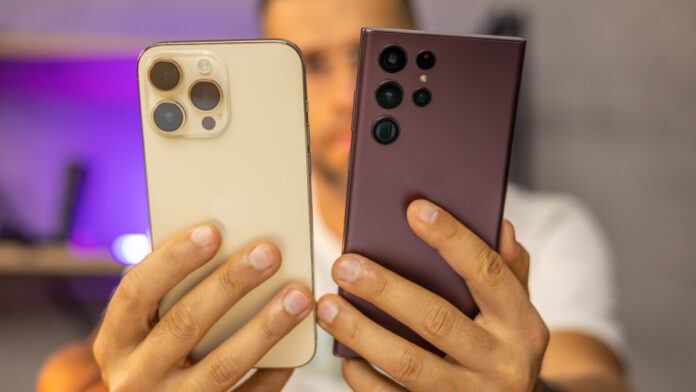 The month of September 2022 saw the debut of numerous new Premium Smartphones including the king of all premium smartphones Apple iPhone 14 series. Furthermore, the festive season in India started within the same month as the selling offers available on Flipkart Big Billion Days 2022 and Amazon Great Indian Festival 2022. October 2022 will be less thrilling because fewer smartphones will be released this month with exclusive discounts near Diwali.

We have listed all of the premium smartphones that are worth purchasing in India in October 2022.

The normal Apple iPhone 14 is a pretty slight upgrade over the iPhone 13, therefore the iPhone 14 Pro is quite a leap above its predecessor. Some of the changes are superficial, but when such a visual revamp as Dynamic Island debuts, it’s difficult not to notice.

The photography on the phone is also impressive, featuring the first 48Mp sensor on an Apple iPhone enabling 2x zoom compression in addition to the 3x telephoto zoom and a decent ultra-wide lens.

Apple has also finally introduced the always display, which just dims your home screen and, in our experience, has no effect on battery life. It’s hardly a significant upgrade over the 13 Pro, but if your smartphone is a few years old, this iPhone will seem lightyears ahead.

The Galaxy Z Fold 4 became public on August 10, 2022, and quickly became one of the finest folding smartphones in the world. Since then, all hands have been on the Z Fold 4. With each device, Samsung is aiming to improve the foldable interface.

The good news is that, despite the enhancements, the phone is at the same price as its predecessor. The Qualcomm Snapdragon 8+ Gen 1 processor enables gaming and browsing more fluidly than ever before.

The 7.6-inch display is an incredible visual pleasure. A superior primary rear camera sensor and telescopic sensor are available. Furthermore, the cover screen is now more adaptable and functional. Everything is nearly perfect, making this the best foldable smartphone in the world right now.

The gadget will be driven by Google’s Tensor G2 processor, which was created in collaboration with Samsung. Finally, the Google Pixel 7 will ship with Android 13.

Apple released the iPhone 13 line of devices globally last year. The top-of-the-line handset in the category is the iPhone 13 Pro Max. Although the company has not eliminated the notch, this smartphone is well worth the price. This is why.

To begin with, this is the most resilient iPhone series to date in terms of overall build quality. Second, the display is a gorgeous 120Hz OLED panel with Dolby Vision support. Third, the handset is fueled by the Apple Bionic A15, which is widely considered one of the world’s fastest CPUs.

Most notably, the battery of the iPhone 13 Pro Max is one of the finest on premium smartphones. Apple has put a lot of effort into the battery, and it reflects in the excellent backup this gadget provides. There is relatively little change in functionality, battery life, and camera between the 13 Pro Max and 14 Pro Max, but a major difference in pricing. Our recommendation is to purchase the 13 series and save every penny

List of OnePlus Upcoming and Launched Smartphones in India (Updated)

The Samsung Galaxy S22 Ultra is an improved version of the company’s previous flagship Note line. It also includes S Pen support. However, the internal parts have been significantly updated.

Under the engine, the powerful Exynos 2200 handles all of your gameplay and computing needs with ease. The primary camera sensor is 108 megapixels, which provides class-leading performance.

The display tells a very different story. The integrated S Pen, which lets you be highly versatile with your tablet, is the icing on the cake. The greatest Samsung smartphone on the globe for creative people.

The OnePlus 10 Pro 5G offers some much-needed improvements over the 9 Pro, and with only a minor price increase, it’s not a bad buy. Even the most costly form of the 10 Pro 5G costs less than the regular models of the Samsung Galaxy S22 and  Apple iPhone 13, offering it a reasonable buy.

The OnePlus 10 Pro 5G has a larger battery with faster charging, a somewhat more energy AMOLED screen, a much more capable SoC with many more 5G channels, a stronger selfie camera, and a prettier design than the OnePlus 9 Pro.

The OnePlus 10 Pro 5G is yet another outstanding flagship from the company, offering excellent features and speed for the price.

The iQoo 9 Pro is a strong offering in the premium market, with a slew of functions and excellent core hardware. A Qualcomm Snapdragon 8 Gen 1 chipset provides adequate speed for everyday use as well as serious portable gaming.

The 6.78-inch AMOLED screen is designed for gameplay, with a refresh rate of 120Hz and a touch sampling frequency of 300Hz, but it is also very color accurate and produces deep blacks when watching videos. The stereo speakers are also fairly loud and immersive.

The camera’s performance is exceptional. All three cameras work admirably in both daylight and poor lighting. The gimbal stabilization on the main camera also performs well enough for daylight video footage, however, the quality suffers slightly when shooting at nighttime.

The Xiaomi 12 Pro is a worthy competitor in the premium smartphones market. The device’s design is luxurious and built of metal and glass but it lacks an official IP classification, which may be a show stopper for some.

It has a beautiful curved display that is Dolby Vision and HDR10+ approved. There is also a quad stereo amplifier configuration, which enhances the video streaming pleasure. The phone’s gameplay performance is outstanding but it does become hot while playing demanding blockbusters at the highest settings.

The camera performs admirably in both daytime and low light. Video recording is amazing and works well at all resolutions, including low-light situations.

With 2021 coming to an end, various social media platforms have introduced "the best" regarding various things. Taking...
News

Oneplus Nord 2 5G will officially launch in India and Europe on July 22. It is the advanced...
Technology

The OnePlus Nord CE 2 5G will be available on February 17, according to the company's announcement on...
Technology

OnePlus is preparing to launch its Nord CE 2 5G in India on February 17. The smartphone is...
Technology

If you're looking for a smartphone upgrade during this festive season, you're just on the right time. The...
News

OnePlus Watch Will Launch on March 23, 2021 Alongside OnePlus 9 Series

A big announcement has been made that the OnePlus Watch will launch on March 23, 2021, alongside the...