The iPhone 14 Pro features a dynamic offshore notch that changes depending on your behavior or the app you’re using. When the music app is active, for example, the notch will present a different type of animation. The main camera on the Apple iPhone 14 Pro is 48MP which makes it powerful and efficient at the same time.

The ordinary model is a small boost over the iPhone 13, however, the iPhone 14 Pro models have gotten some significant and intriguing modifications that will undoubtedly appeal to a large number of buyers. 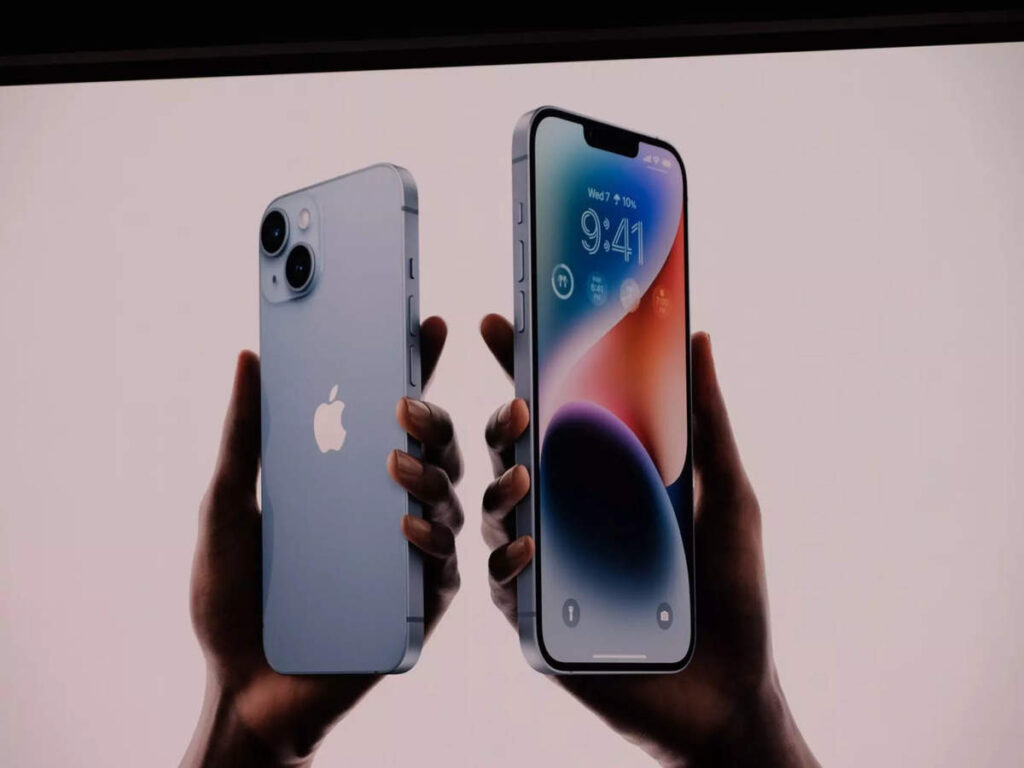 Apple iPhone 14 and 14 Plus features and capabilities:

Apple has finally adopted the punch-hole display technology with the iPhone 14 Pro variants. This look has been seen on numerous Android smartphones and has now made its way to iPhones.

Unfortunately, the basic iPhone 14 and iPhone 14 Plus models continue to use the previous larger notch design found on the iPhone 13 generation. The phones will be available in five various colors: midnight, red, purple, starlight, and blue. However, those looking for a larger screen and battery at a cheaper price will be able to obtain them with the upcoming iPhone 14 Plus model.

The iPhone 14 has a 6.1-inch  OLED screen, while the Plus model has a 6.7-inch screen, which is also available on the iPhone Pro Max. The gadgets include an Oled panel with a high brightness of 1-200nits and Dolby Vision compatibility.

Both iPhones feature the same A15 Bionic technology as in last year’s devices. The front-facing camera is also 12-megapixel, but it also supports a hybrid version with a TrueDepth sensor, which will aid lock focus quicker, even in dim light. There is also a new video dynamic mode that makes use of the entire sensor along with overscan and roll correction to produce a more stable video. The iPhone 14 Pro and iPhone 14 Pro Max are fueled by the all-new A16 Bionic chipset, which promises to enhance performance, photography, and battery life. The chip has a 4-nanometer layout.

The A16 Bionic CPU, according to Apple, is “far ahead” of what any Handset can offer because it is the “fastest” processor in any device. Apple claims that the new 6-core CPU, which has two high cores and 4 high centers, is up to 40% speedier than the rivals and can handle demanding tasks.

Indian customers and 30 other nations and territories can pre-order the iPhone 14 Pro and iPhone 14 Pro Max starting September 9, with the phones becoming accessible on September 16.

The Apple iPhone 14 Pro and iPhone Pro Max come with a triple rear camera configuration that includes a 48MP main lens. The quad pixel detector is Apple’s “smart” way of calling pixel binning, which is available on practically every other Android smartphone.

Customers can, however, snap and capture photographs in full resolution without discarding the pixels while using ProRAW. A 12MP telephoto camera and a 12MP ultra-wide sensor are also included. The ultra-wide camera is said to improve macro shooting.

The new Photonic processor in the Apple iPhone 14 Pro and iPhone 14 Pro is said to offer better photographs in dim lighting. Both phones offer an Action option and a Cinematic Mode that can film in up to 4K quality. A new 12MP camera is located on the front of the device.

Read More: Apple watch series 8, SE Gen 2, and Ultra launched: Whether its worth an Upgrade or not

Previous article
Apple watch series 8, SE Gen 2, and Ultra launched: Whether it’s worth an Upgrade or not
Next article
India to Ban the Sale of iPhones Without the Power Adapter
Flickonclick Team

Apple has launched its latest device new iPad which is the 8th Generation iPad or iPad 10.2 (2020),...
Technology

5G has arrived with lightning-fast internet speeds in India, and many people wonder whether their smartphone supports 5G....
Technology

iPhone devices are loaded with features and mainly offer ample internal storage, which can store loads of videos,...
Technology

OnePlus 10 Pro 5G VS iPhone 13 Pro Max: Which one you should buy

OnePlus Pro 5G, the flagship smartphone from OnePlus, launched on 1st April 2022 and has already caused a...
Technology

Google recently launched the Pixel 6A at the Google I/O 2022. The smartphone succeeded the Pixel 6 launched...
Offers