Nicolas Cage is a popular actor who has starred in many successful movies. Here is the list of his 10 highest rated movies. 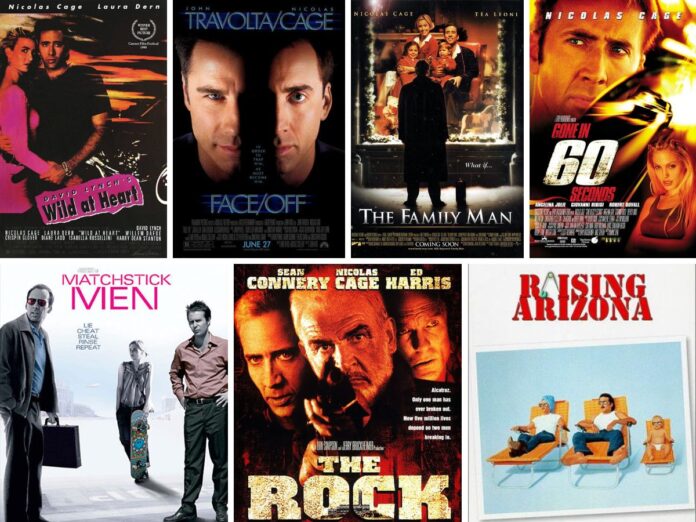 Nicolas Cage is a highly acclaimed actor who has appeared in numerous movies throughout his career. Throughout his career, Nicolas Cage has appeared in films across a variety of genres and is known for his intensity and versatility. His performances are consistently praised for their intensity and range, and he has won numerous awards and accolades for his work in the Hollywood film industry. In this article, we will highlight some of the highest-rated movies of Nicolas Cage’s career.

This dramatic film follows the tumultuous relationship between a desperate and alcoholic screenwriter and a prostitute, and Cage’s portrayal of the self-destructive and doomed protagonist is both raw and emotional. He received numerous awards for his performance, including an Academy Award for Best Actor.

In this surreal and meta comedy-drama, Cage plays both a struggling screenwriter and his fictional twin brother. His performance is full of energy and charisma, and the film received rave reviews from critics.

This action-packed thriller follows a group of elite soldiers who must rescue the hostages of a rogue general, and Cage’s portrayal of a brilliant but unhinged FBI chemical weapons expert is both intense and memorable. The film was a major commercial success and received positive reviews from critics.

In this dark comedy, Cage plays a con artist with obsessive-compulsive disorder who is thrown for a loop when he discovers he has a teenage daughter. His performance is full of wit and vulnerability, and the film received positive reviews from critics.

This offbeat comedy follows a couple who decide to kidnap a baby to start their own family. Cage’s portrayal of the hapless and lovable thief is both hilarious and endearing. The film was a critical and commercial success and cemented Cage’s status as a talented and versatile actor.

This high-octane action film follows a retired car thief who is forced to steal 50 cars in one night to save his brother, and Cage’s portrayal of the hero is full of energy and intensity. The film was a major commercial success and received positive reviews from critics.

In this romantic comedy, Cage plays a passionate and eccentric baker who falls for his fiancée’s estranged sister. His performance is full of charm and humor, and the film received widespread acclaim from critics and audiences.

This heartwarming comedy-drama follows a wealthy and successful man who is given the chance to see what his life would have been like if he had made different choices. Cage’s performance as a family man is full of warmth and depth, and the film received positive reviews from critics.

This bizarre and violent love story follows a young couple on the run from a hitman and various other dangers. Cage’s portrayal of the reckless and passionate protagonist is both intense and memorable. The film was a critical and commercial success and solidified Cage’s status as a leading actor.

This high-concept action thriller follows an FBI agent and a terrorist who switch faces and identities, and Cage’s performance as both characters is full of energy and intensity.

In addition to his acting career, Ghost Rider is also an avid collector of rare and valuable objects, including art, books, and vintage cars. He is a passionate and knowledgeable collector and has used his love of collecting as a source of inspiration for some of his roles.

Nicolas Cage has had a long and varied career as an actor, and these 10 movies are just a small part of his entire impressive body of work. Cage is known for his commitment to his craft and his willingness to take on diverse and challenging roles. He is admired for his professionalism and his ability to bring authenticity and depth to every performance.

Some of the great benefits of subscribing to Disney Hotstar are the availability of Bollywood and Hollywood movies,...
Entertainment

Movies often lead you to connect with their imaginary characters. Binge-watching movies and web series on streaming platforms...