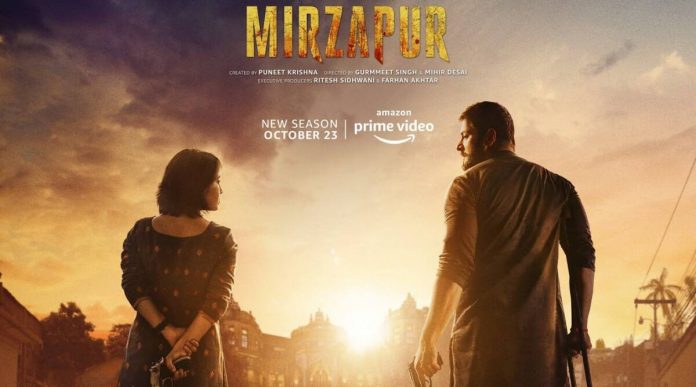 Mirzapur is one of the most popular shows on the Amazon Prime Platform and it’s coming back with another season. Yes! Season 2 of Mirzapur is coming this October 23rd but there’s more to do before that. Now, While you wait for that, enjoy the new trailer that they just dropped yesterday.

On the occasion of the premiere of the Mirzapur season 2, Amazon also treated its users with a gift. This is that Mirzapur season 1 was set to watch for free on the Prime Platform from 25th to 30th September 2020.

This also created a hype among the users not having the prime subscriptions to enjoy and be updated with the story of season one.

Now, from this point onwards, we’re going to take a deep dive into the story of the second season. And if you’re someone who wishes to stay away from spoiler for the previous season because you were lazy enough not to watch it. Then you might want to switch to some other news.

Now, the second season is plotted toward the Guddu (Ali Fazal) taking revenge against the Munna Bhaiya, who did wrong him.


Killing his brother and love interest, he left Guddu to survive along in this world just out of sheer jealousy that Guddu might be the next heir of the crown of Kalin Bhaiya, his dad, and the uncrowned king of Mirzapur.

The trailer would give you goosebumps and one can feel the vibe that Guddu is onto no good this season. And just like an injured lion he’s going to bounce back hard and strong at his predators.

The new emerging due will be formed of Golu and Guddu, where the girl Golu belonged to a political family who has an interest in taking the place fo Kalin Bhaiya. And now she has eyes on that throne after they’ve killed her sister Sweety in the last season.

While Guddu is coming back in a fierce look and you can expect much action from this one dialogue quoted by Guddu which says’ Ab Humko Badla bhi Lena hai aur Mirzapur Bhi…|”, which is enough to send shivers down the spine of fans.


The actress Shriya Pilgaonkar, who played the character of sweety commented on the release of Season 2 as fans wanted her back even after her death in season one.

She says “I just have to say this. There is no bigger reward for an actor than to be known & loved for the characters they portray on screen. Sweety Gupta has given me more than I could have ever imagined. I’m overwhelmed by how many ‘miss you‘ messages I’ve received ever since Mirzapur Season 2 was announced. Your suggestions of resurrecting Sweety are incredibly creative & amusing but I take it all as a sign of your love.”

The coming season has surely risen the excitement level of all of us and we can’t wait for the 23rd October as of yet, can you? Tell us in the comments what are your plans for Mirzapur season 2?


ALSO READ The best ever Indian web series that you cannot miss.

Previous article
What To Watch On Disney+Hotstar in October 2020?
Next article
The New Experimental Features Available to the YouTube Premium Subscribers
Flickonclick

Mirzapur 2 Review: What to Expect From The Amazon Prime Show?

Mirzapur 2 has been released yesterday, and we know you can't wait for its review before you start...
Entertainment

The best Ullu web series are filled with thrill, excitement, seduction and intimacy. You won't be able to...