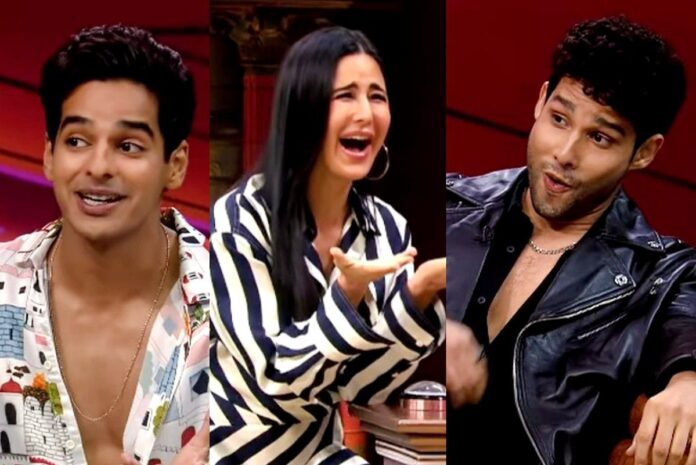 You cannot avoid the thrill and craziness of Koffee With Karan if you are a fan of Bollywood. The biggest personalities in the nation discuss professions, love lives, friendships, and disputes with abandon on the chat show, which takes pleasure in being lighthearted and silly. Karan Johar’s natural charm and close relationships with the guests also help to relax the A-listers and act as a catalyst for them to loosen up and have fun.


The seventh season of “Coffee with Karan” gave us a number of special moments. In the episode, Katrina, Ishaan, and Siddhant spoke openly about their experiences on set and personal matters while also discussing issues that are troubling the entertainment business. Ishaan Khatter’s contagious enthusiasm caught our attention and made us think of the original Ranveer Singh while Katrina and Siddhant captivated us with their grace and wit. The scenes from Koffee With Karan Season 7 Episode 10 that demonstrate that Ishaan Khatter is also a Ranveer Singh are shown here. We are aware of Ranveer’s magnetic appeal and the impression he immediately has when entering a room. What’s this? Not any different is Ishaan Khatter. Like the background music, his introduction in the KwK episode had a certain mood.

2. Ishaan is a passionate storyteller who pumps up everyone in the room

He actually stood up to portray how he was ignored when Katrina arrived on the set for the first time.

3. Ishaan legit made Karan speechless for a while

Only a skilled person could make Karan stumble over his words with his string of conjectures.

4. Ishaan Khatter and his infectious passion for dancing

One of the most engaging dancers right now is Ranveer Singh. Even though he is not the main performer, he steals the show. Ishaan demonstrated all the hook steps in the KwK episode with his outstanding dances and contagious passion.

5. Ishaan provided the game round at KwK’s most ridiculous response ever He also lacks filters as a person.


6. Ishaan’s not easily intimidated, just like Ranveer who can intimidate everybody on Earth

There is only one male actor I know whose confidence game stands out from the rest, and I don’t mean to imply that Ranveer and Ishaan are the same people. That actor is Ranveer Singh. Being in the same room as a renowned actor without feeling afraid says a lot. Ishaan’s confidence trick differs from most of us as well.

7. Siddhant stopped going to the gym since it became unmotivating because Ishaan is so fit

I mean! Who else do you suppose could be so active, so confident, and fit and potentially demotivate others?

8. Ishaan encourages Karan in a similar way to Ranveer

We are aware of how much Ranveer Singh promotes Karan, but he is not the only one.

9. That moment when Ishaan lost it

Ishaan has a contagious enthusiasm for the game round. It was amusing how loudly he was actually shouting the replies. Seeing him in that way alarmed even Katrina.

Ranveer Singh and Deepika Padukone are happily married "made for each other" couples. In his most recent post,...
Entertainment

Phone Bhoot box office collection day 2 is estimated to be Rs 2.55 Crores on Saturday. The movie...