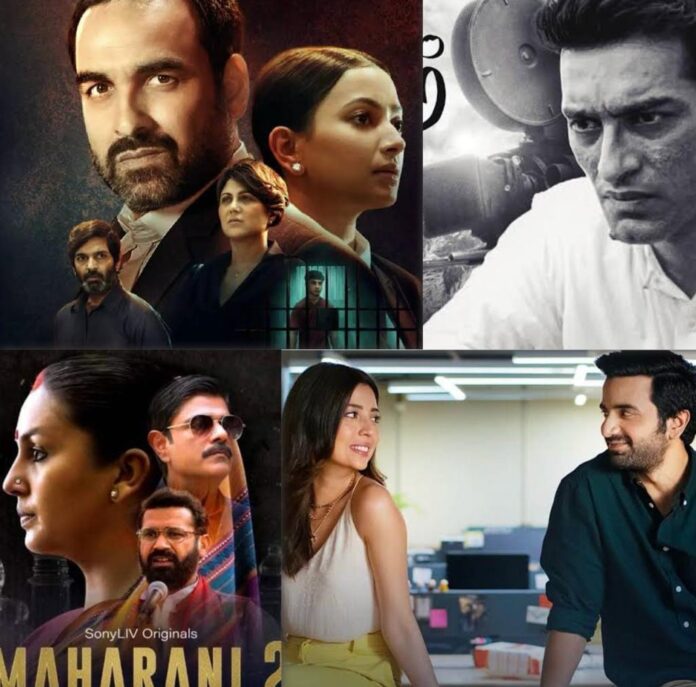 OTT services are the most popular source of enjoyment nowadays, and it appears that we are gradually becoming addicted to them. At the same time, OTT networks make a lot of money from subscriptions. OTT platforms are introducing new movies and web series in practically every region daily. We are already in the fourth week of August and OTT platforms has a planned list of web series and movies to premiere this weekend. So Flickonclick will inform you about all major Hindi web series and movies releasing this weekend. Check now.

Criminal Justice: Adhura Sach will be available on Disney + Hotstar on August 26. The third part in the “Criminal Justice installment, created by Rohan Sippy, has Pankaj Tripathi reprise his role as the eerie prosecutor Madhav Mishra. Aditya Gupta, Gaurav Gera, Purab Kohli, Deshna Dugad, Swastika Mukherjee, and  Shweta Basu Prasad all appear in the major role in the series. Criminal Justice has already demonstrated its enormous potential in winning audiences’ heartstrings on Disney+ Hotstar. They went out this season to make the performance greater and better using visual theatrics.

The Global Emmy Award-winning show returns with yet another fascinating criminal story about a group mercilessly attacking and killing the elderly. As the death toll grows, the authorities are unable to identify the perpetrator. It will be interesting to see how DCP Vartika Chaturvedi handles the case this time around. Rasika Dugal, Rajesh Tailang, and others appear in Season 2 of Delhi Crime.

Aparajito – The Undefeated a dedication to great filmmaker Satyajit Ray’s struggle in crafting the cult masterpiece “Pather Panchali,” will premiere on ZEE5 on August 25. Beginning in the early 1950s Calcutta, “Aparajito” tells the narrative of Aparajito ‘Apu’ Ray (Kamal), who sets out to recreate his difficulties to make his debut movie Pather Panchali. The film follows Apu’s development from a wide-eyed toddler to an intellectually gifted adolescent, as well as the rising complexities of his bond with his mother.

Maharani Season 2 is going to be broadcast on Sony LIV on 25th August. The Story reveals Rani Bharti, the spouse of Bihar’s chief minister, Bheema, is employed at home in this fictional story. She just thinks about her house and her spouse. She wants to pack her possessions and go to the village once her husband resigns as Bihar’s Chief Minister. Her life takes a surprising turn when her husband, Bihar’s Chief Minister, is forced to expose the name of his successor. His party members look excited to discover who has been selected, but he shockingly reveals Rani as his replacement.

The beautiful love story of officemates Shuarya Singh and Sanya Agrawal has returned. Season 3 of Please Find Attached will be available on 24th August. Barkha Singh and Ayush Mehra will be featured in the program as their love story progresses after dazzling the public with their connection. The web series follows two young millennials in Mumbai who are attempting to reconcile their career and personal lifestyles. Office coworkers who become housemates ultimately are infatuated with each other. They start on an adventure as they attempt to establish the appropriate work-life balance. Other cast members include Vaibhavi Upadhyaya, Aditya Pandey, and Tushar Dhembla in major roles

HIT – The First Case starring Rajkummar Rao will be available on OTT on August 28. The mystery thriller, a Hindi version of the same-named Telugu smash from 2020, opened theatres on July 15. The film HIT, which means Homicide Intervention Team, tells the narrative of a police officer (Rao) on the hunt for a kidnapped woman. Sanya Malhotra also appears in the picture. The Hindi remake was directed by Dr. Sailesh Kolanu, who also produced the original movie. Bhushan Kumar, Dil Raju, Krishan Kumar, and Kuldeep Rathore created the HIT  The First case movie.

Cirkus, the Bollywood comedy movie directed by Rohit Shetty released in the theatres on 23rd December 2022 and...
News

Let me ask you a question, do you still watch TV, or do you prefer OTT platforms like...