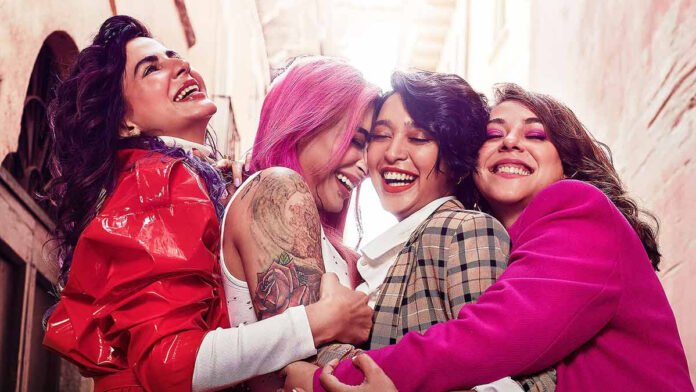 Four More Shots Please! Season 3 Review: The Amazon original series continues to be a pioneer in the world of the portrayal of today’s modern Indian women who are flawed, messy and real with their feelings.

Four More Shots Please! started as a show that depicted the life of four single working women in urban Mumbai. The show has gradually transformed into a depiction of Indian working women managing their work life, love life, friendships, relationships and more. The best thing about the new season is that it does not shy away from projecting the flaws of women which gives it a touch of reality.

Director Jyoteeka understood the assignment quite well, as the third season of critically acclaimed drama delivers on the expectations. While some may argue that the show has underexplored a few themes which could have made it a brilliant display of unabashed single Indian women on the small screen. However, only a few certain things can fit in a series that’s only 10 episodes long with 45 minutes per episode.

On the front Four More Shots Please! Season 3 seems to be a drama about independent Indian women seeking pleasure in their life. However, it’s much more than that. It delves deep into the psyche of the aftermath of events that lead to certain sorts of flawed, messy but real decisions that will surely resonate with the female viewers.

Four More Shots Please! Season 3 is as daring as the first two seasons and you may feel at some point that the story is becoming repetitive with its narrative but ain’t life gets repetitive at certain points. Just as we evolve as people the web series will surely evolve with the characters getting more developed in the upcoming seasons. It definitely deserves a one-time watch for its flawed, messy but real display of modern Indian women.

Liked the review of Four More Shots Please! Season 3? You can stream it right now on Amazon Prime Video.

TVF released a new mini-series – TVF Aspirants, a month ago and it has already won millions of...