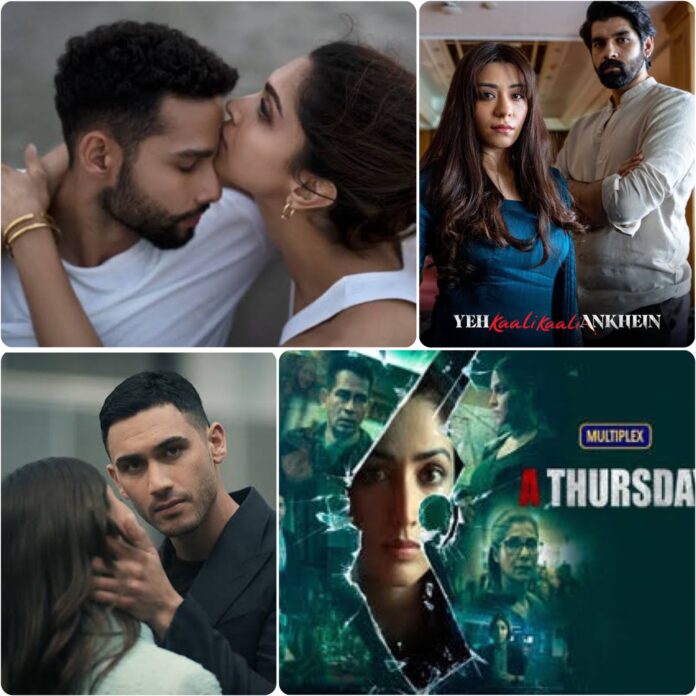 We are now in the second month of the year 2022. Many new web series and movies have been added to the OTT platform in February and January. The competition is fierce. In the following days, it is projected that all OTT channels will be flooded with many initial release movies and Web series. Whether it’s a horror, rom-com, or action-comedy, the OTT platforms are still brimming with them. This January, there are various much watch movies and web series on which the public has shown their affection by mostly watching.

So, here is the list of the latest 8 must-watch Movies and web series that you must binge-watch this weekend

The series’ plot revolves mostly around Vikrant, a loving cretin who has become the target of Purva’s affection. The lady is going through hell to make him hers, but there is a guy who has attempted everything to getaway. Crucially, the man quickly falls in love with Shikha, but the entire situation takes a terrible turn when Purva reappears in his life. Hence, the trailer creates a sense of anticipation, similar to the classic track from the 1990s. Additionally, Yeh Kaali Kaali Ankhein title music which is running in the back.

Gehraiyaan is on rank 2nd in the list of must watch movies and web series. The gossip of the town, a convoluted story of love, trust, deception, heartbreak, and complicated relationships, was launched today, February 11th, 2022. The movie, which stars Deepika Padukone, Ananya Pandey, Siddhant Chaturvedi, and Dhairya Karwa, has created quite a stir in the media. Hence, Watch the romantic film with your loved one on Prime Video.

If you enjoy watching murder tales, The Great Indian Murder is a must-see. Its intriguing plot, inspired by the book ‘Six Suspects,’ will leave you glued to the display. Pratik Gandhi and Richa Chadha star as the main characters. Moreover, the two characters are playing detectives tasked with resolving the murder investigation, which involves six suspects. Tigmanshu Dhulia will helm the show, it is available on Disney+ Hotstar.

Importantly, Kapil Sharma, a prominent Indian stand-up entertainer, made his Netflix online premiere with his comedy spectacular I’m Not Done Yet. The one-hour event includes gags on his popular comedy program The Kapil Sharma Show on Indian media, as well as his contentious tweets and advice on why not to drink and tweet.

A Thursday is one of the best must watch movies in the month of Feb 2022. It is a good thriller’s surprise nature, as well as how successful and for how much it keeps its audience’s attention throughout its runtime, are indications of a suspenseful film. ‘A Thursday,’ produced by Behzad Khambata and featuring Yami Gautam Dhar, fulfills most of the criteria for a terrific thriller. Gautam plays Naina, a pre-primary school instructor who decides to kidnap her 16 students one Thursday. Hence, she calls the local police department and tries to kill her captives on an hourly rate, including a student’s driver and a classroom aide, if her expectations are not met.

Ama, a wedded professor of law, takes a week away from family in Dark Desire, a weekend that sparks romance but ends tragically. Season 2 will pick up on the cliff-hanger from the previous season is Brenda still alive? while also delving deeper into Alma, Dario, and his brother Esteban’s convoluted and deadly romantic drama. Netflix’s Dark Desire Season 2 has taken over the globe since its February 2 premiere.

One of us is lying is a crime story inspired by Karen M. McManus New York Times’ finest novel of the same title. In fact, the novel is available under the same title. The first season of the show features a murder case. However, the series stars Annalisa Cochrane, Marinaly Tejada, and Mark McKenna among others.

Another one of the best much watch movies is I want You Back. Peter (Charlie Day) and Emma (Jenny Slate) believed they were on the verge of life’s most important moments marriage, children, and suburban homes –until their respective lovers rejected them. Fearing that their affections have already gone on. Moreover, Peter and Emma devise a humorous plot to win back their ex-lovers, with surprising outcomes.

Read More: Best Web Series On SonyLIV That You Can Watch Over This Weekend