Chhorii Movie review: Add another remake of Horror film in the watch list 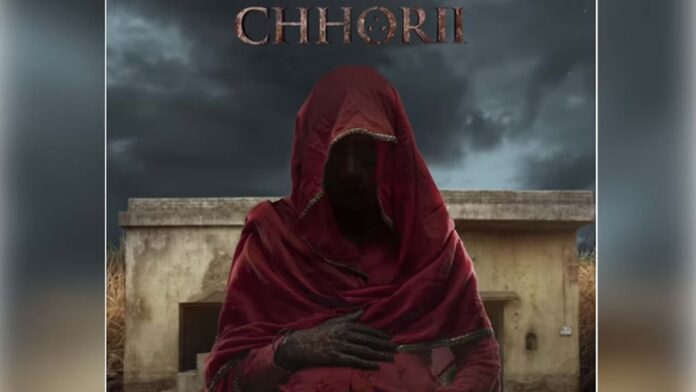 Chhorii Nushrratt Bharuccha’s Amazon Prime Video horror thriller movie Chorii pales in contrast to the Marathi version. The director is revising his film with Chhorii. As a result, the chances of the original’s vision being lost are reduced. At least, that’s what We believed and assumed at first. Read the full Chhorii movie review below.

Chhorii is a frightening story about a young couple in India’s heartlands. Sakshi (Nushrratt Bharuccha) is eight months pregnant when she and her husband are forced to evacuate their home and seek safety in a house concealed inside a sugar plantation.

However, the fields are riddled with historical secrets that begin to unravel as the film progresses, posing a danger to the mother and her unborn baby. Even as Sakshi works to rescue herself and her infant baby. The sighting of three mystery children and burnt mothers, along with a soul-stirring ballad emitting from an ancient transistor, causes her sanity to crumble.

Is Sakshi going to be able to protect herself? Will she be able to keep her unborn kid-safe? Most significantly, will Sakshi be able to escape the labyrinthine fields? Sakshi’s search to discover solutions to all of these concerns leads us on a journey filled with terror, thrills, and chills in equal measure.

Vishal Furia attempted to intimidate and leave a note. However, he is not utterly terrified and can make his argument effectively. When it comes to acting, Nushrratt Bharuccha has done a terrific job and she also impresses with her performance. Mita Vashisht also performed an excellent job.

Nushrratt Bharuccha has been choosing some daring and unbelievable choices, and it’s exciting to see her expanding horizons. In Chhorii, she transforms into a lady who is trapped in a dilemma with her pregnant child. She works hard to save it and discovers the deepest secret. Nushrratt portraying as a Sakshi is nearly in every shot of the film, and she manages to give us thrills and chills even when she is terrified and helpless.

Mita Vashisht is the movie’s second most prominent character. Her character has a dramatic 180-degree makeover and changes colors entirely. The actress demonstrates her caliber and variety.

Ishal Furia attempts to match the scope of his story. He adds to the suspense and dread of the situation. He tries to pack the most punch possible by the conclusion, but the first hour appears to be underutilized. But once he starts playing, there is no turning back, at least for first-time viewers.

Ketan Sodha’s soundtrack is eerie and fitting for the film. It does give you goosebumps, so give it a thumbs up. The greatest decision is to keep the film’s main theme songless for the most part.

The production design is also to be commended because there is a limited amount of area and producing visually stunning and frightening sets is a skill.

Female feticide, a social atrocity, is the subject of the film. Although the director does not mention the state, you may see that Haryana is being discussed. A state with the worst track record of engaging in this inhumane activity. ‘Chhori’ is a picture full of suspense and horror. If we’re talking about the horror genre, this film comes at you like a strong wind and makes you feel afraid all weekend. Nushrratt Bharuccha’s acting abilities and Vishal Furia’s effort to improve his content shine out in Chhorii.

Union Budget 2022 Highlights: Everything You Need To Know

The Indian Women’s Hockey team makes their presence known by emerging victorious against the Australian team with a...
Lifestyle

The Union Public Service Commission exams were conducted successfully. There were two schedules for the same; one was...
Technology

Aadhaar Card, which is one of the most important identification document for anyone living in India can make...
Entertainment