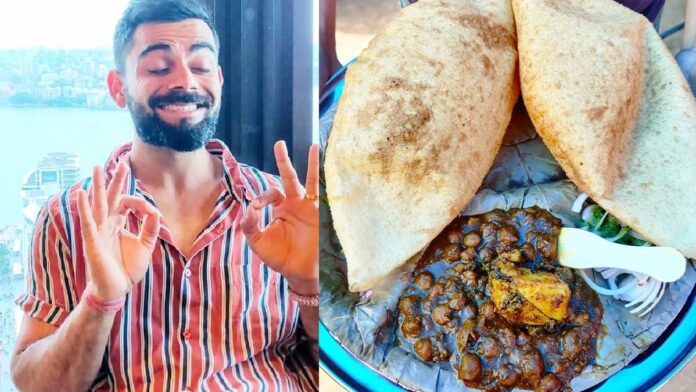 Virat Kohli’s change from a fat cricketer to a completely fit individual is incredible. He is currently one of the strongest players. Kohli is also one of the best batters of his generation, and the Indian captain guides from the beginning when it comes to living a disciplined life. His passion for health has motivated not only his mates but also everyone who watches him play.

Kohli’s greatest fitness philosophy has been his practice of adhering to a tight food plan over the years to keep on the peak of his game. But when he was younger, he enjoyed a wide range of cuisines. The Delhi native recently disclosed what he would like to eat on a cheat day.

Kohli is now a vegetarian and meticulously follows a fitness routine and diet that has contributed to his performance on the field. Do you know Virat Kohli has great eating memories with Delhi’s famous Butter chicken but in recent years he left the non-veg from his eating menu? Love marriage with Anushka Sharma or Fitness whatever may be the reason but there is still a foody person inside King Kohli.

Kohli has followed a strict nutrition plan for many years to stay at the peak of his game. The Indian captain, on the other hand, claimed that he is a big eater and has a long list of delicacies he would like to indulge himself with if given a no-regret cheat day. Kohli revealed his ideal cheat day cuisine during an Instagram live conversation with Indian football squad skipper Sunil Chhetri.

You’ll be relieved to know that it’s not just us who think in the soul-soothing effect of cheat lunches; even Virat Kohli enjoys deviating from his healthful eating and treating himself. What is Virat Kohli’s favorite cheat meal? Chole Bhature is Delhi-style street food. Kohli in a recent chat with Gaurav Kapur that he enjoys Ram Ke Chole Bhature in Delhi.

The cricketer is a well-toned athlete who follows a gluten-free, low – carbohydrate, high-protein meal. The diet is a significant departure from the Indian skipper’s previous eating habits. Virat, a Punjabi at heart, grew up eating butter chicken and chhole, a recipe that was cooked in the house when Sardesai asked. “Well, I’m a decent Punjabi kid who used to adore butter chicken and food overall, so the early days of a regulated diet were tough,” Virat confesses.

Virat Kohli has opened an eatery called One8Commune at Aerocity in New Delhi, and he has included some of his favorite recipes on the menu. One of them is the mushroom googly dumplings. When he enters his eatery, he never fails to order this dish. Virat likes its flavors and tried it for the first time on his tour. So, after trying this dish, he decided to include it on the menu.

Kohli in a recent chat asked what would be his favorite cheat meal he said in the morning Chole bature, in Lunch Rajama Chawal and Paneer Patty as an evening snack with hot and sweet sauce.

Read More: Top 10 Virat Kohli Hairstyle That You Should Tryout

India shockingly defeated Pakistan thanks to a masterful Virat Kohli performance. Even though India lost their top four...
Trending

Virat Kohli, the face of world cricket, has a fan base comparable to the world's most popular athletes...
IPL

Skipper Virat Kohli made a huge announcement on Day 1 of the UAE leg of IPL 2021 that...
Entertainment