Shabaash Mithu Review Punchline: The movie is filled with riveting moments that will rile you up and make you cheer for the former Indian Women’s captain Mithali Raj portrayed by Taapsee Pannu. The actress excels in her role, and the supporting cast is excellent, especially Vijay Raaz. 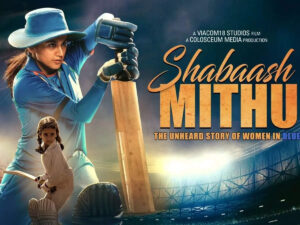 Shabaash Mithu Story: The movie is a biographical drama based on the legendary women’s cricketer Mithali Raj for India. It traced her journey from her early childhood when she practised to being a Bharatnatyam dancer. However, she secretly had a blossoming love for cricket as well and started playing with her friends. One day she was spotted by a cricketing coach Sampath (Vijay Raaz), which changed her life forever. The coach encourages her to hone her skills in batting and aim for India. She received support from her family and took the road that made her a superstar in Indian cricket.

Taapsee Pannu has given a brilliant performance in this film. She is the soul and heart of the biopic that delivers on its promise. The direction of Srijit Mukherji has let people know that Mithali fought a different battle than other cricketers. She had it all but always wanted to thrive for more. Her struggle was internal, not external. She fought with her own shortcomings and motivation for the success of the Indian team.

A scene in the movie perfectly captures the turmoil of Mithali Raj. The former woman cricketer sits down to make a list of what she has and has not. However, she could think of nothing that she didn’t have. These moments let the viewers know that what they are witnessing is not a typical rag-to-riches story but a story of a champion player with extraordinary struggles. The cast is brilliant, including the child actors Inayat Verma and Kasturi Jagnam. Vijay Raaz as a coach is perfect in the movie. No matter what role he touches, he always delivers. The journey of Mithai from a rookie to a revered world-class player is just amazing and spectacular. The film does not try to be grand, but the significance of the events rolling in front of the viewer’s eyes will definitely strike the chord of a grand scheme of things.

Although the film tells Mithali’s story from childhood to 2017, there are a few important moments that are not handled with perfection. For example, Arjuna Award and Padma Shri received by the cricketer are mentioned in passing remarks. The filmmakers could have done something else to highlight the major events.

Overall, the movie is a must-watch for Bollywood and cricket lovers. And if you are a Taapsee Pannu fan get ready to be surprised pleasantly with her performance.

Previous article
Jhanvi Kapoor and Sara Ali Khan talk about their Friendship in Koffee with Karan Season 7
Next article
Hit The First Case Review: Rajkummar Rao’s Thriller is a Pure Bliss for his fans
Virat Verma

Varisu was released in the theatres on 11 January 2023, and the movie has been praised for its...
Entertainment

In movies and television, side characters are typically positioned behind. The purpose of supporting characters is to assist...
Talent

The new-gen Bollywood divas Kiara Advani and Janhvi Kapoor are the definitions of hotness and boldness among the...