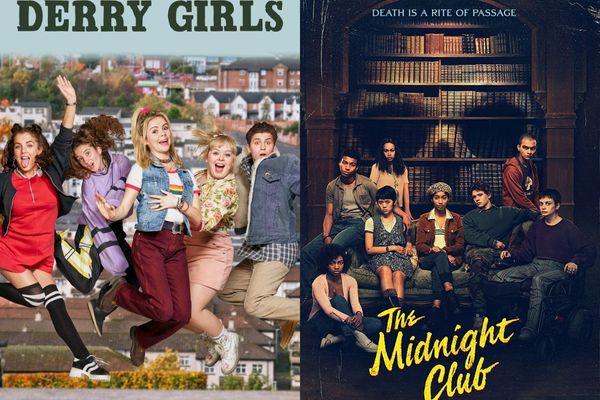 The most entrancing of months, October, has arrived. Get ready to watch the best shows and episodes streaming right now on Netflix as October heats up with top-notch material. You can rely on Netflix to set the standard with outstanding and avant-garde new content. People have been excitedly awaiting the release of new Netflix shows for the entire month. So below are the 10 shows releasing on Netflix in October 2022.

The well-liked Northern Irish comedy from the 1990s is back for its third and last season, which concludes — historical spoiler alert — with the Good Friday Agreement’s signing in 1998, which signalled the formal end of the Troubles. However, until then, you can amuse yourself with hilarious conversation and accents that are so strong you might need to activate the closed captioning. Nicola Coughlan from Bridgerton was discovered by Netflix because of this show, which had its UK debut on Channel 4 in 2018.

Hasan Minhaj returns to Netflix with his second stand-up comedy special, which was shot at the storied Brooklyn Academy of Music. In this humorous performance, Hasan discusses his views on freedom of speech, parenting, and reproduction.

Mike Flanagan, a prolific horror-drama master, is known for his work on Netflix’s The Haunting of Hill House and Midnight Mass, two of the best horror shows produced in the last ten years. This is his most recent endeavour. It is an adaptation of Christopher Pike’s 1994 teen thriller of the same name, which centres on a group of young patients in a hospice unit who assemble at midnight to share spooky tales.

The lives of Mexican show business royalty Sylvia Pasquel, Laura Zapata, Luca Méndez, and Lorena Herrera are followed in this series as they develop a special connection.

As we approach Halloween, the Emmy-nominated sitcom is back with a season packed with tricks and goodies. The desserts are purposefully spooky this time, with creepy surprises from some beloved Netflix series, including The Witcher, Cobra Kai, and Umbrella Academy!

7. Conversations with a Killer: The Jeffrey Dahmer Tapes

Through recently discovered taped interviews with his defence team, this three-part documentary series examines the deranged mind of serial killer Jeffrey Dahmer. It also reveals how his predation of Milwaukee’s underprivileged populations was made possible by his race, sexuality, class, and policing.

In this redesigned version of the high-stakes competition series The Mole, twelve players collaborate on challenges to add money to a pot that only one of them will ultimately win. One of the players has been given the codename “the Mole” and has been charged with undermining the group’s attempts to make money. One player will ultimately outlast the others and uncover the Mole to get the prize money. For a three-week event, brand-new episodes will air every week.

Daniel Ek, a young internet entrepreneur from Sweden, and his significant business partners are the focus of The Playlist. By providing free and authorised streaming music to a global audience, they changed the entire industry. It is a tale of how strong convictions, unwavering resolve, access, and lofty goals may enable little players to upend the existing quo by revolutionising how we can all enjoy music.

Phil Rosenthal, the creator of Somebody Feed Phil and Season 6 of Everybody Loves Raymond, travels the world to experience the local cuisine and culture. Phil will visit many brand-new places during this season, including Philadelphia, Croatia, Austin, Santiago, and Nashville. There will also be a special episode dedicated to Phil’s parents, Helen and Max.

SonyLiv has emerged as a popular destination for movies and shows with hits like Scam:1992, Shark Tank India,...
Entertainment

December may be the final month of the year but it is loaded with big blockbusters which promises...