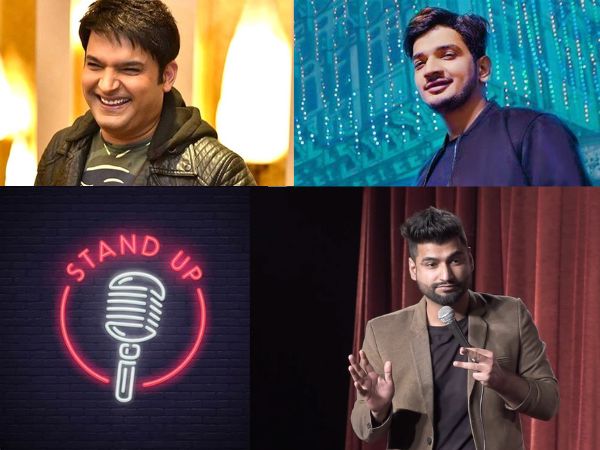 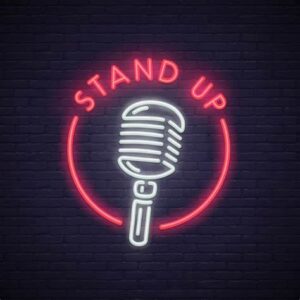 From Raju Srivastava To Kenny Sebastian: Top 20 Indian Stand-Up Comedians Of All Time 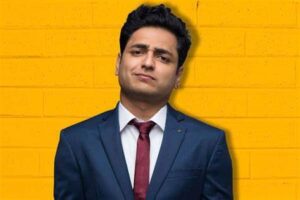 Indian comedian, musician, and director Kenny Sebastian are well-known. He has published multiple comedy specials and performed stand-up comedy all over the world. He created and oversaw the production of The Living Room, the first Indian sketch comedy television series, in 2014.

Kenny Sebastian is one of the most well-liked and wealthy comedians. Wikipedia, Forbes, and Business Insider all estimate Kenny Sebastian’s net worth at $1.5 million. 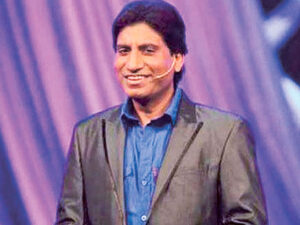 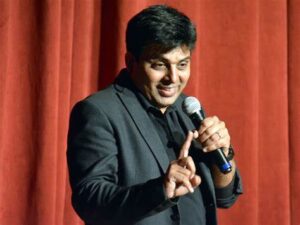 Amit Tandon was raised in Patiala, Chandigarh, Punchkula, and Delhi before being born there on December 14, 1975. He graduated from IIT Delhi with a Mechanical Engineering and MBA degree. Amit worked in operations and business development roles for start-ups and large corporations for more than ten years after graduating. The Married Guy is the stage name for Indian stand-up comedian Amit Tandon, who is well-known in the comedy community.

Also read: 10 Best Comedians in India that will make you laugh out loudly 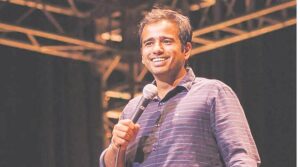 Delhi-born comedian and a well-known name in Indian stand-up comedy is Gaurav Kapoor. He is well known for his razor-sharp wit and dry humour, which have helped him win almost every open-mic competition in which he has taken part.

Gaurav frequently performs in the nation’s comedy clubs. On his India tour, he opened for Russell Brand and Vir Das and performed on some of the biggest stages. 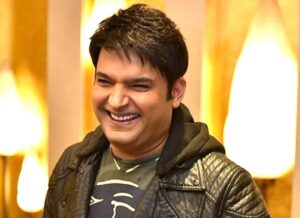 Indian stand-up comedian, actor, and television producer Kapil Sharma is well-known for hosting What’s Up With Kapil Sharma? In the Celebrity 100 list published by Forbes India in the years 2016 and 2017, he was rated 11th and 18th, respectively.

He received the CNN-IBN Indian of the Year award in the entertainment category in 2013, and The Economic Times named him third on its list of the most admired Indian personalities in 2015. Kapil Sharma is one of the Best standup comedians in the world. 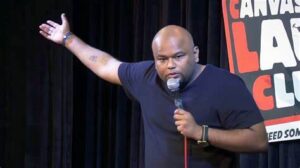 Nishant has more than 20 years of experience in the Indian entertainment industry as an actor, comedian, and director. Nishant has a long history of theatre performances. Comedy programs, including Comedy In Diversity, Two And A Laugh Men, and Third World Comedy, were created by Nishant. He is a founder member of IPL, the top improv comedy group in Delhi. Indian actor and comedian VirDas VirDas is from India. He was born in India but grew up in Nigeria. He relocated to the USA after high school to pursue higher education. At the Knock Harbach Theater’s premiere of the comedy series “Brown Men Can’t Hump,” he made his standup comedy debut.

After his return to India in 1996, he started presenting and participating in comedic programs including the well-known “The Great Indian Comedy Show.” In the Bollywood drama “Namastey London,” he made his acting debut in a little role. Then, in the film “Mumbai Salsa,” he portrayed the main character. Zakir Khan is well renowned for his distinctive brand of Indian humour. He must do this by evoking the feelings that Indian families and young people who are attempting to succeed there frequently experience. His stories are funny and simple to recall.

One of the most well-known names in Indian comedy, he received numerous praises for his Amazon Prime special “Haq Se Single.” He also served as a judge for the Great Indian Laughter Challenge’s fifth season. He frequently performs in the comedy scene in India. He is one of the best Best stand-up comedians in India. 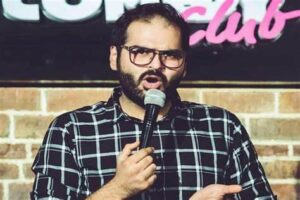 Indian stand-up comedian Kunal Kamra is renowned for his observational humour on the oddities of life. During his appearances, he makes jokes about politics, cab drivers, the bachelor lifestyle, and TV commercials. 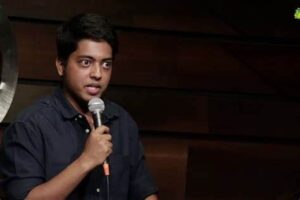 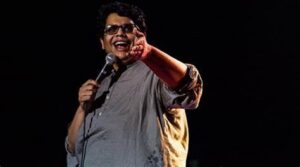 Tanmay Bhat is an Indian comedian, actor, producer, YouTuber, and writer. Along with Gursimranjeet Singh Khamba, he co-founded and served as CEO of the creative firm All India Bakchod. 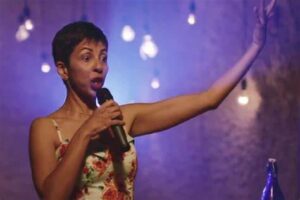 Indian writer and comedian Radhika Vaz. Vaz, a marketing professional who was born in Mumbai, works there. She graduated from Syracuse University in New York with a master’s in advertising. 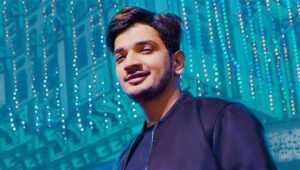 Munawar, one of India’s top comics, must be included on our list of the best stand-up comedians in the country. His timing and amazing facial expressions never fail to dazzle the crowd! Faruqui is well-known in India as a contentious individual, media figure, and Internet phenomenon. He is a comedian, rapper, social media celebrity, writer, and YouTuber. 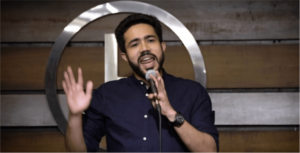 Upmanyu’s unique selling point is his poker face; he tells jokes based on his experiences while maintaining a perfectly straight face. Having studied chemical engineering, he tells engineering jokes that will make you laugh, but he doesn’t stop there.

Breakups, discrimination in India, childhood memories, and respecting elders are just a few of the themes he discusses in his speeches, which are occasionally humorous as well as eye-opening. 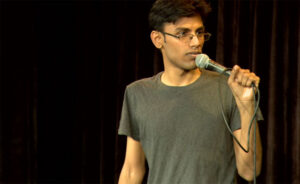 IIT biotechnology graduate Biswa Kalyan Rath rose to renown with his YouTube series, “Pretentious Movie Reviews,” which we heartily recommend watching. Biswa departed his stable position at Oracle, and you may frequently hear him laughing about his time spent there and at IIT. 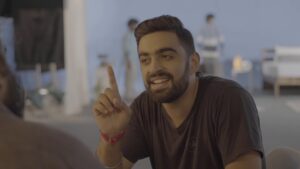 Rahul claims to have left his native Punjab before the first aeroplane took off. Everything was fine up to his placement under parental control. He held both an MBA and an engineering degree.

The absence of drugs and the presence of long-lost pals gave rise to stand-up comedy. His quips, which are representative of the middle class in India, are as amusing as his financial predicament. 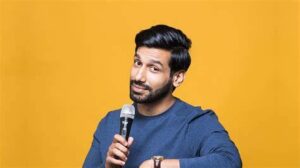 Kanan and Biswa first met during an open mic in 2013, and Kana did the ‘Pretentious Movie Reviews’ along with Biswa. If you loved or even heard how good ‘The Living Room’ by Comedy Central was, thank Kanan, as he contributed to many of its sketches.

Kanan and Biswa (above mentioned) did ‘Pretentious Movie Reviews’ together and post that Kanan received immense love from the Indian audience. At the beginning of his stand-up career, he contributed greatly to a Comedy Central sketch program called The Living Room. 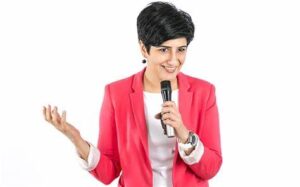 Neeti Palta began her career in 2006 by co-writing the television puppet series “Galli Galli Sim Sim” that aired on the DD National. Later, in 2012, she won the RAW Comedy competition, which was supported by the OZ Fest. As a result, she began uploading comedy videos to her YouTube channel, which is how she rose to fame. 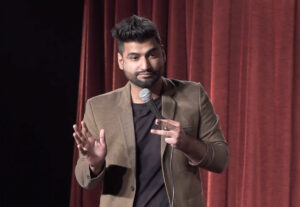 Indian stand-up comedian Harsh Gujral started his career on YouTube in 2017 and immediately gained notoriety. He has more than a million subscribers to his YouTube channel, and he has 470K Instagram followers.

Harsh holds an engineering degree and has experience working with numerous MNCs. He used to create jokes based on his views of society while bored at work; these gags eventually provided the basis for his comedic approach. His humor, which takes inspiration from Kapil Sharma, is grounded in actual people and events.

Live stand-up comedy shows have become one of the best ways to spend an evening laughing out with...
Entertainment

Comedy Web Series in Hindi hits differently from comedy shows in English. We all know that listening to...
Talent

Friends have been one of the top running shows of all time, and there are numerous reasons for...