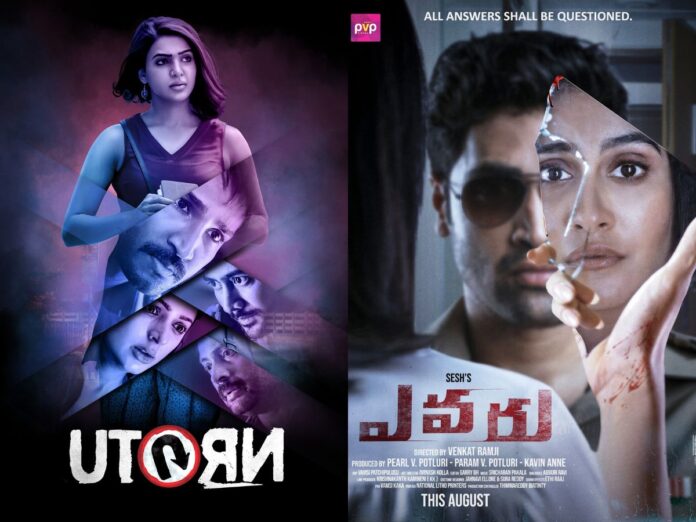 One of the best Telugu thriller movies to watch online in 2023, Karthikeya is a mystery thriller that takes you on an engaging ride. Karthikeya, a medical student, travels to Subramaniyapuram to participate in a medical camp. But he makes the decision to look into the enigma surrounding the Kumara Swami temple after learning about it. The Telugu mystery thriller is right now available to watch online on the OTT platform MX Player.

A remake of the Malayalam thriller of the same name, Drushyam 2 is a must-watch for any suspense lover. The Telugu crime thriller movie follows a man who must save his family after a series of events reveal the dark secrets of the past. It stars Daggubatti Venkatesh in the lead. You can watch it online on Amazon Prime Video in 2023.

With the aid of a crime reporter, Rachana, an intern at a major newspaper, looks into accidents that happen on a flyover. She is, however, charged with the death of a regular flyover driver. One of the most unexpected twists happens in this Telugu crime thriller. The movie will keep you guessing until the very end. It’s one of the best Telugu thriller movies to watch online on MX Player for free in 2023.

An accomplished police officer is abruptly stopped in his tracks by the enigmatic killer V, who challenges him to put an end to his killing spree. If you love crime thrillers that are filled with mystery and suspense then this is the Telugu thriller movie for you to watch online. It is currently streaming on the OTT platform Amazon Prime Video in India.

Police inspector Vikram is tasked with finding the killer of a senior officer who is accused of sexually assaulting Sameera. He discovers sinister mysteries connected to his history as he conducts his investigation. This is one of those Telugu thriller movies that will make you second guess your every prediction. It’s certainly one of the crime thrillers to watch online on Amazon Prime Video in 2023.

One of the best Telugu thriller movies to be released in the recent period, Red is as confusing as it gets. Two identical people become the main suspects in a murder case after becoming involved in it. The argument, however, becomes more challenging as more information surfaces. You can stream this crime thriller online on the OTT platform Netflix in 2023.

This is one of the best suspenseful Telugu thriller movies of all time. The movie follows a lady with multiple personality disorder who takes on the roles of several characters that are merely mirrors of her own life. She encounters a lot of difficulties. It’s an engaging and hard-hitting mystery drama that you can watch online on Disney+ Hotstar for free.

Inspector Deepak is given the case when an unidentified couple passes away. But during the investigation, he is involved in a fight and loses his leg, which causes his career to stop. However, will inspector Deepak stop his pursuit of the criminal after this or will he continue to hunt the criminal? The answer to this question forms the crux of this story. Definitely, one of the best Telugu thriller movies to watch online for free on Disney+ Hotstar and MX Player in 2023.

The family of Manohar relocates to a new apartment on the 13th floor. Their tranquilly is nevertheless shattered when a spirit approaches them through the television. It is one of the best horror movies that you can watch right now. Also, the suspense and thriller involved in this film are at the next level. You can stream this Telugu thriller online on Disney+ Hotstar.

Last but not least on the list of best Telugu thriller movies to watch online in 2023 in 118 a crime thriller that never lets you off the hook. Investigative journalist Goutham frequently dreams about a woman being murdered. So he sets out to see if his dreams have any deeper meaning. You can stream this movie online on the OTT platform Disney+ Hotstar in 2023 for free.

Halloween is just around the corner, and most of us are probably gonna party with our friends in...
Entertainment

Well, we all agree that Bollywood is getting better with its sci-fi handling with time but still, the...