All you need to know about Tim Hortons, Canada Coffee Brand opens up in India Tim Hortons, Canada’s coffee and baked products franchise, opened in India on August 11 with two outlets in the national capital area: Gurgaon and Saket. Tim Hortons, best known for its iconic coffee, drinks, and food, has designed many customized menu selections for the Indian marketplace. Aside from consumed beverages such as the French Vanilla, the Iced Capp, a blended frozen coffee drink, and bite-sized pieces of classic donuts known as Timbits, the menu includes a section devoted to made-to-order cuisine and baked products, where slices of bread, spices, and garnishes can be personalized.

Tim Horton, who played in the National Hockey League from 1949 until his death in a car accident in 1974, established the company. The original Tim Horton’s establishment, which offered burgers, was in North Bay, Ontario. The chain’s first doughnut shop, called Tim Horton Donuts, debuted on May 17, 1964, in Hamilton, Ontario. The title was then reduced to Tim Horton’s, and then dropped the personal comma to become Tim Hortons.

Tim Hortons is Canada’s biggest restaurant brand that specializes in fast food. It has expanded its offers outside Canada and the United States in recent times. It now has over 5,300 restaurants across the Middle East, China, the United Kingdom, Mexico, Spain, Thai, and the Filipinos.

Tim Hortons opens up in India:

The coffee company intends to open its first location in New Delhi before expanding farther north. Tim Hortons intends to grow further into Punjab and other regions of the country after opening two stores in the Delhi NCR. Along with refreshments, there will be prepackaged meals and baked products available, including delightful bite-sized chunks of traditional doughnuts known as Timbits. The coffee cafes in Select Citywalk Mall (Saket) and DLF Cyberhub (Gurugram) will have warm and inviting décor influenced by the brand’s Canadian heritage. 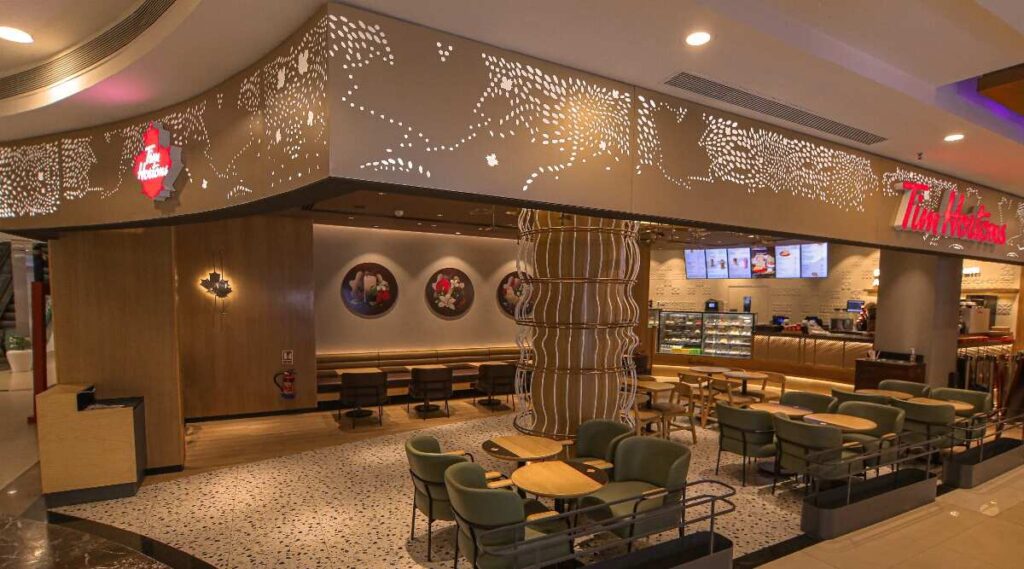 Tim Hortons launches in India as part of an exclusive arrangement with Apparel Group and Gateway Partners’ joint venture business. AG Cafe International Management LTD, the company’s master licensee in India, will host a launch ceremony with H.E. the Canadian envoy to India, Cameron MacKay, to commemorate the inauguration of the company’s first two sites in Delhi NCR.

We’ve officially opened our doors wide open for you!

According to Navin Gurnaney, CEO of the Tim Hortons brand in India, when Tim Horton initially established its operations in 1964, he had the objective of creating “a place where anyone can go at any time and feel at home.” He also stated that the Indian coffee market is likely to exceed $4.2 billion by 2025, with out-of-home use contributing to around 20% of the business. Tim Hortons sees India as a significant opportunity since the Indian coffee retail chain industry is estimated to reach $850 million by 2025.

Delighted to join today for the opening of @TimHortons first 2 locations in 🇮🇳 in Gurugram & Saket, and meet some new friends. Come and enjoy 🇨🇦 favourites like #timbits and #doubledouble, along with Canadian comfort food. Best wishes @TimHortonsIndia! pic.twitter.com/h5YOaRkTYp

“We are genuinely dedicated to investing in India’s community growth and advancement,” Navin Gurnaney stated. “Our food menu offers a healthy balance of foreign as well as Indian appetizing food choices,” stated the CEO of the Canadian coffee brand’s India subsidiary. Our wraps are stuffed with lamb seekh and paneer tikka. The ravioli pasta with the famous local palate of the makhni sauce is one of our unique fusion recipes.

Navin Gurnaney says “The ravioli pasta with the famous local taste of the makhni sauce is one of our unique fusion recipes. To accommodate most preferences, our food selection includes both vegetarian and non-vegetarian choices. Customers can also enjoy our trademark cheese melts and a range of customizable sandwiches in addition to these. While we cater to Indians’ global aspirations, we will also differentiate ourselves by providing localized varieties in our culinary line that will equally appeal to the Indian palate”

Read More: 8 Simple Ways to get Starbucks Coffee for free

Previous article
8 pocket-friendly places to have sushi in Delhi NCR
Next article
10 Best Food and Drinks To Order at Tim Hortons in Delhi, Gurgaon
Flickonclick Team

A new proposal approved by Delhi Lieutenant Governor VK Saxena has ensured that restaurants, cafes and hotels in...
Lifestyle

Gurugram is beaming with offices and continues to develop as an employment hub with many prominent companies setting...
Lifestyle

10 Best Food and Drinks To Order at Tim Hortons in Delhi, Gurgaon

Select Citywalk Mall in Saket, Delhi and DLF Cyberhub in Gurgaon are buzzing with the famous coffee brand...
News

A new proposal approved by Delhi Lieutenant Governor VK Saxena has ensured that restaurants, cafes and hotels in...
Lifestyle

10 Best Food and Drinks To Order at Tim Hortons in Delhi, Gurgaon

Select Citywalk Mall in Saket, Delhi and DLF Cyberhub in Gurgaon are buzzing with the famous coffee brand...
Lifestyle

What can be better than having a romantic candlelight dinner with your partner? This is what makes the...
Lifestyle

Delhi is a heaven for foodie people with several cafes, eateries, street food, clubs, and bars where one may spend time...