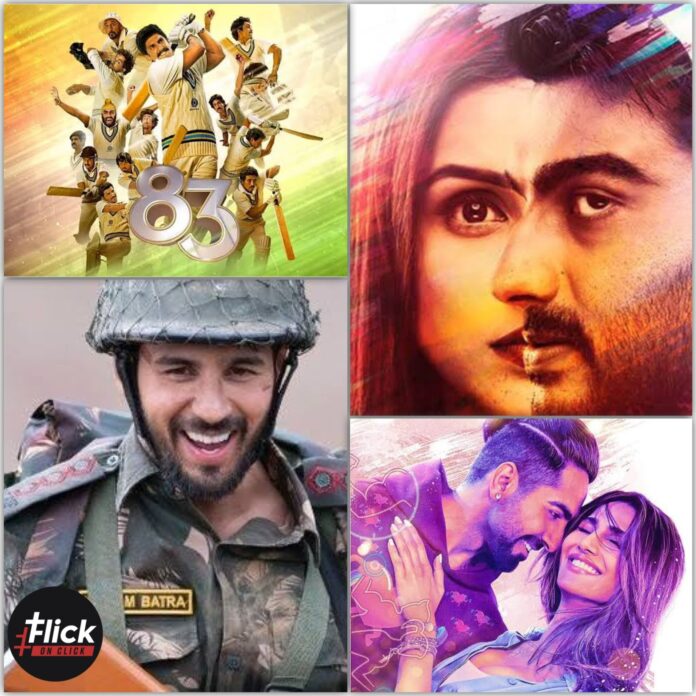 For the past two and a half months, the government has provided authorization for cinema halls to open, but we are now back in the same situation. We are finally in 2022, waiting for new films like Jersey to hit theatres, but we are once again confined to our homes due to the pandemic. Don’t worry, we’ve compiled a list of the best movies of 2021 that you should watch in your leisure moments on various OTT Platforms.

83 is the latest Cricket movie starring everyone’s favorite Ranveer Singh, Deepika Padukone, and other casts. However, this movie opens back Historical pages in Cricket history, How team India won its first world cup and earned a lot of respect. Likely, Ranveer Singh Portraying Kapil dev (Skipper of team India in 1983).

This is one of Bollywood’s most popular best cricket movies. It also contains some amusing scenes, such as Kapil Dev’s pledge to win the World Cup in front of the entire cricket council after losing the first three practice games. After much struggle, Kapil dev and his team earned respect for India and made our country proud by winning hearts and the World Cup.

When Bunty Aur Babli was released in 2005. The coupling of Abhishek Bachchan and Rani Mukherjee, two A-list actors portraying small-time con artists who get bigger with each scam they carry off, was novel. Smart scripting, charming music, and the genuine interplay between Mukherjee and Bachchan all contributed to the film’s light touch.

This sequel attempts to recapture that enchantment. Saif Ali Khan takes over for Bachchan as Bunty, but Mukherjee returns as the real Babli. The two have retired and given up their follies as swindle artists. There’s a fresh con artist couple in town, and they’re endangering Bunty and Babli’s legacy. Especially, the two conniving teams square up.

Despite the numerous issues it raises, Chandigarh Kare Aashiqui is another of those milestones. Manu (Ayushmann Khurrana) is a hulking gym instructor with a slew of gym rat pals and a meddling family. Manvi (Vaani Kapoor), a Zumba trainer, walks into his gym and lifestyle one day. Significantly, sparks fly and things quickly become hot and steamy.

Manvi, on the other hand, is a transgender woman who has had sex reconstruction surgery. This discovery follows Manu through a succession of problems while informing the viewer about the difficulties that Manvi has had to confront. Additionally, this Movie shows the real-life circumstances of a trans woman. How society judges and Embarrass them.

Haseen Dillruba is a pulpy criminal thriller comes under the best movies of 2021. which stars main actress Taapsee Pannu plays Rani, a recently married lady attempting to find out her role in her husband’s family. Its appeal, though, comes from watching the secondary characters who portray her in-laws. Hence, rani marries Rishabh because he appears to be a decent fellow, especially given that the guy she was previously didn’t seem serious in a lifetime engagement.

Rishabh, despite his mother’s protests that Rani is too intelligent for him, marries Rani because he starts infatuating. But it requires more than a momentary fancy to keep a marriage together, as Rani and Rishabh discover soon after the marriage. When they bring in a beefcake distant relative, the bond becomes toxic. Furthermore, someone is killed.

Sandeep Aur Pinky Faraar has been characterized as a dark comedy, which is territory Banerjee is accustomed to. Their names contradict assumptions immediately away: Pinky, a cop unexpectedly discharged of duty. Moreover, it is played by the moody and obnoxious Arjun Kapoor.

Sandeep, a sophisticated banker who plays her cards near to her chest, is played by Parineeti Chopra. Pinky is assigned the duty of capturing Sandeep, but things go wrong and both of them wind themselves on the road. Sensibilities about class, sexuality, privilege and the urban-rural gap are tested along the journey.

Shershaah is one of the best movies of 2021 ever made.  This historical war film, directed by Vishnuvardhan, delves into the tale of Kargil war soldier Captain Vikram Batra. This film stars Sidharth Malhotra and Kiara Advani in significant roles and has a faultless storyline and music. Undoubtedly, this film will send you on an emotional roller coaster.

Shershaah is based on the true story of Capt. Vikram Batra, a brave Indian soldier who helped India win the Kargil War in 1999. It is an Amazon biopic that makes an excellent job of highlighting critical features of late army soldier Vikram Batra’s remarkable actions and life.

Sooryavanshi movie tops our list of best movies of 2021. The storyline of this action-packed film centers all around the head of an anti-terrorism team, who teams up with two other authorities to prevent a terrorist cell from attacking their city.

The film, created by Rohit Shetty, features Ranveer Singh,  Katrina Kaif, Ajay Devgn, and Akshay Kumar. Importantly, this film will keep you glued to your displays with just the correct balance of foot-tapping melody and excitement.

This film, starring Kartik Aaryan as the flamboyant news anchor Arjun Pathak, has a gripping and intricate plot. This is a respectable version of the 2013 Korean movie ‘The Terror Live,’ which depicts a newspaper and how the news industry is deceitful and predatory. This is a film about a news anchor who gets into a chat with a terrorist who plants bombs in several Mumbai sites.

Their dominance disparity and the issue of who is controlling & who is handling deftly. Aaryan is excellent as a frazzled and eager journalist desperate to save his job, fame, and significance. Also, keep an eye out for Amruta Subhash’s incredible performance as the newsroom’s manager. Moreover, this entertaining film brilliantly highlights the topic of channel popularity vs. your morality.

This is a thriller that is unrepentant in its treatment of its protagonist hero, Akshay Kumar. Whereas, he is called back to rescue more than 200 people from a hijacked plane. And he does it in style, wearing trendy flared trousers. What’s the problem?

This political drama with enormous promise rarely lets you remember that it’s led by an actor with enormous star power. But there’s a lot of fun to be had in this 1984 picture, in which a skilled intelligence operative, portrayed by Kumar, lands on foreign soil to rescue a couple of hundred innocent travelers from the clutches of brutal fanatics. It’s not a flawless drama and may seem stagey. Definitely, it’s also not unmemorable.

This biopic about Sardar Udham Singh, who murdered Michael O’Dwyer, a previous Punjab governor who ordered the 1919 Jallianwala Bagh slaughter in Amritsar, has problems, but Vicky Kaushal is excellent in the lead part.

The film, directed by Shoojit Sircar, follows his journey from orphan to prominent political martyr. There are some grey spots in this rousing biopic, but the overall experience is tremendously engaging. Therefore, it also serves as a reminder that performers like Vicky Kaushal thrive in complicated parts.