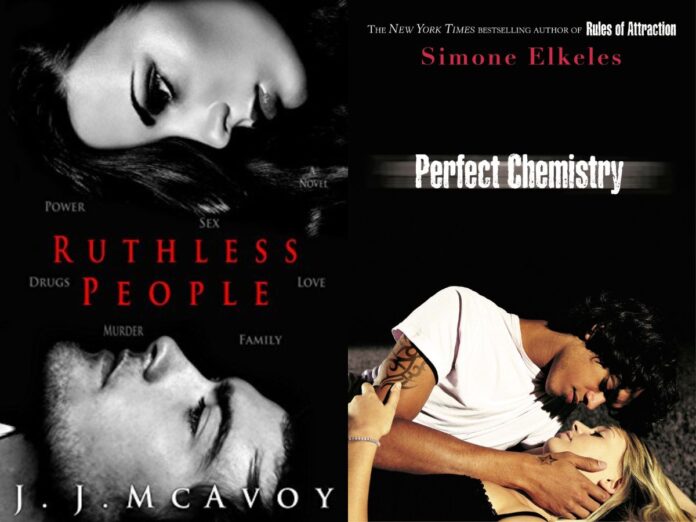 Written by Cora Reilly this is one of those mafia romance novels on which you just cannot miss out. The story keeps getting better with the different scenarios that continue to play out in this novel. It follows a girl born into a mob family in Chicago. Her father had arranged her marriage to a rival mafia family’s heir when she was quite young to maintain peace between the two families. However, will everything go as planned? Will the girl accept her fate or will she try to find her happiness and love?

Written by JJ McAvoy the Ruthless People has quite a similar premise to Bound by Honor but what differentiates this story is the inclination of its characters and the things turn out to be completely different. The novel follows a man and a woman belonging to two respective mafia families. They are married off by their parents to maintain peace in the mafia family. However, the man and woman are in a struggle of their own to gain the upper hand. Will their marriage result in a catastrophe?

Cora Reilly is a master when it comes to writing mafia romance novels. This is another one of her hits. However, this is an adult novel. The story is about two people who enter a marriage of convenience. Also, it is the second marriage for both of them. However, along the way, their convenience starts to turn into a dependence and they ultimately grow fond of each other. But will they be able to sustain the newfound love and romance?

Written by JT Geissinger, Carnal Urges is an additive mafia romance novel. The story includes the themes of power and control; secrets and lies; obsession, betrayal, and love. The Irish mafia kidnaps a girl and what follows after that is a crazy ride that will have you guessing and gasping for the ultimate climax.

Written by LJ Shen, The Kiss Thief is a story of a girl whose first kiss is stolen by a mafia man. The novel follows a female whose life becomes intertwined with two males due to the mob family that she belongs to. Will she be able to find true love for her or will there be a disastrous outcome of this three-way love situation ship?

Written by Tijan Meyer at first Carter Reed seems like one of the most easygoing mafia romance novels. However, the story takes unexpected turns at certain points which makes it so good to read. The official synopsis of the novel reads that a woman who lives at a hotel is friends with a girl who makes bad choices in the men she dates.

7- Torture to Her Soul

Written by JM Darhower, Torture to Her Soul is one of the finest mafia romance novels that I’ve ever read. The story follows a woman who loves a man who always ends up hurting her one way or another. The toxicity and masculinity are wrapped around the concept of unconditional love in this mafia romance novel in the best way possible. It deserves to be read by everyone at least once in their lifetime.

8- Monster in His Eyes

This is another of the masterpieces of JM Darhower in the world of mafia romance novels. It is hailed by critics as a gritty, sensual, thrilling and compelling book that won’t let you stop until your reach the climax. It’s a page-turner and definitely one of the best books about mafia romances.

Written by Bethany Kris this mafia romance novel follows the two brothers born into a mafia family. It traces their life journey and explores how these characters are sometimes so vulnerable that they become the weakest people on the planet despite having all the power at their disposal. Also, the romantic tension is pretty high in this sensational book.

Written by Simone Elkeles, Perfect Chemistry is without a doubt one of the best mafia romance novels of all time. The story follows a man who bets about making a girl fall in love with her. He succeeds and wins the bet but they start to experience the consequences of his bet when he realizes that the girl he has tricked has much more problems than he could have ever imagined.

There's nothing like getting lost in a good book, and 2022's book release schedule is jam-packed with them....
Lifestyle

Self-Help Books of all time. We love them. We hate them. We have different opinions on a single...
Lifestyle

Self-Help Books of all time. We love them. We hate them. We have different opinions on a single...
Lifestyle

Tamil novels have come into the limelight again after the adaptation of Ponniyin Selvan by Mani Ratnam as...
Entertainment

There's nothing like getting lost in a good book, and 2022's book release schedule is jam-packed with them....