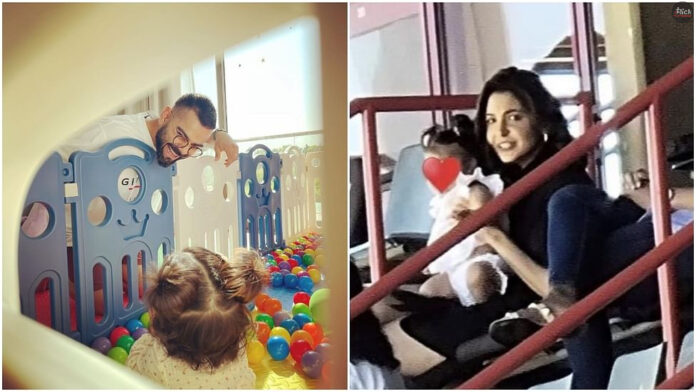 One of the most lovable Jodi of Virat Kohli and Anushka Sharma has shown the world that they stand beside each other no matter how the situation is. They have always been the center of discussion as fans can never quit gushing over their everlasting bond. Recently we have seen Anushka Sharma along with her daughter Vamika Kohli accompanying Virat Kohli for his test and ODI series against South Africa.

Both, the mother and daughter were witnessed sitting in the stands and cheering for the phenomenal cricketer. Pictures of Vamika with her mother are going viral on the internet and fans cannot refrain from talking about them. 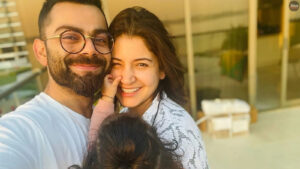 There is one picture that has been making buzz on social media. In this picture, the little princess’s face is covered with a red heart emoji because parents are concerned about their child’s anonymity.

Also Read: – Apart from Virushka, These Indian Cricketers Are Also A Proud Father of a Baby Girl

Other than this, the picture still manages to steal many hearts. Anushka is holding her daughter in a black outfit. Also, Vamika Kohli is wearing a white frock along with two little ponytails and sitting on her mother’s lap.

Anushka Sharma had a moment of relief after seeing that her daughter’s face is covered. She also thanked the paparazzi for not disrupting their child’s privacy on Instagram. Before leaving for South Africa, Virat Kohli was asking the reporters not to take pictures of Vamika.

The couple clearly stated at the time of their daughter’s birth that they do not want to expose their child to the social media world until she individually develops a sense of how to deal with it and understand its significance.

As the phenomenal cricketer is busy playing matches, meanwhile, his wife and daughter are enjoying traveling different places inside the country. Clicking photos and sharing stories on social media with her fans.

Also Read: – Some of the Precious Gifts That Anushka Sharma &#038; Virat Kohli’s Daughter Vamika Has Received so Far

Anushka Sharma is actually an active user of social media and she frequently shares her life moments with fans. Since her pregnancy, she has been off the screen and now planning to enter again into Bollywood.

Fans are eagerly waiting for her return and they express their excitement in the actor’s comment section. Reports suggest that she will make a comeback in 2022 with an action-packed story.

Anushka Sharma is one of her own class. She's one of the finest actresses that have promisingly delivered...
Talent

Virat Kohli, the face of world cricket, has a fan base comparable to the world's most popular athletes...
Fitness