Apart from Virushka, These Indian Cricketers Are Also A Proud Father of a Baby Girl 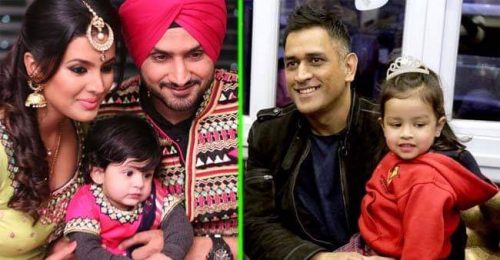 Finally, the beautiful moment has arrived as Anushka Sharma and Virat Kohli are blessed with a baby girl on 11th January 2021. A new chapter of their life has begun as happiness has arrived on their doorstep in abundance. The couple received congratulatory messages and best wishes from their family, friends, colleagues, and their die-hard fans.

The number of blessings that they received from many people was overwhelming and touchy for the couple. Everyone is eagerly waiting to see a glimpse of their daughter’s first photograph as they cannot hold their excitement anymore.

The internet went crazy and flooded with the first glimpse shared by Virat Kohli’s elder brother Vikas Kohli. He welcomed his niece and shared a cute picture of a baby tine feet wrapped in a cozy blanket along with a heartwarming caption, “Happiness overboard… angel in the house”. Everybody thought it was Virushka’s kid picture but Vikas Kohli clarified further in his post that was random picture of a cute baby.

Ajinkya Rahane married his childhood love Radhika Dhopavkar in 2014, and the couple was blessed with an angel on 5 October 2019. The couple later named their daughter Aarya meaning Goddess Parvati/Goddess Durga.

Ravichandran Ashwin is considered a cool bowler who has rarely been noticed losing his temper on the ground. This classy cricketer married Prithi Narayanan in 2011 and gave birth to two beautiful daughters named Akhira meaning white lily (born in 2015) and Aadhya meaning Goddess Durga (born in 2016).

Consider him to be the great wall of India as his defensive playing technique has brought many wins in test cricket. In 2013, Cheteshwar married Puja Pabari and the beautiful couple gave birth to an adorable baby girl on 22 February 2018. They named their daughter Aditi meaning boundless or innocent.

Talking about classy batsman in the Indian cricket history and Gautam Gambhir’s name is ranked top in the list. He brought victory for India in the 2007 World T20 and 2011 World Cup. After retiring from the cricket world in 2018, this astonishing cricketer joined politics and has been a star face of BJP since then. Gautam married Natasha Jain in 2011 and they gave birth to two daughters named Aazeen meaning beauty (born in 2014) and Anaiza meaning mercy (born in 2017).

Harbhajan Singh married Geeta Basra on 29 October 2015 who is a British actress who has appeared in Bollywood films. They gave birth to a daughter named Hinaya Heer Plaha who was born on 27 July 2017 in Portsmouth, Hampshire. The spinner has not been active for the team since 2013, but he has brought many successful glories for Indian cricket.

The most famous kid before the arrival of Virushka’s daughter. MS Dhoni married Sakshi in 2010 and gave birth to a cute little angel named Ziva meaning light of god, who was born on 6 February 2015 at Gurugram’s Fortis hospital.

Sachin Tendulkar, The Master Blaster and the greatest batsman in the history of cricket married Anjali Tendulkar on 25 May 1995, who is an Indian pediatrician and a philanthropist. The couple gave birth to a daughter named Sara meaning princess who was born on 12 October 1997. Sara did her schooling at Dhirubhai Ambani International School, Mumbai, and went onto graduate in medicines from University College London.

He is the best opener that our Indian cricket team could ever have. He has brought many glories for his country, winning the 2007 World T20 and the 2011 World Cup. Rohit married Ritika Sajdeh in December 2015 and they were also blessed with a baby girl named Samaira meaning the one who is protected by God and was born in December 2018.

Suresh Raina has been a vital member of the Indian cricket team when they won the 2011 World Cup. Suresh married Priyanka Chaudhary on 3 April 2015 and their beautiful daughter named Gracia meaning mercy was born on 16 May 2016.

The Prince of Kolkata, current BCCI President, Sourav Ganguly has achieved many milestones in his career and brought unforgettable victories for the team. Dada married Dona Ganguly on 21 February 1997 and gave birth to their cute daughter named Sana meaning splendid, who was born on 3 November 2001

Kapil Dev played a greater role in shaping the future of Indian cricket by bringing a glorious victory by winning the 1983 World Cup against West Indies in Lord’s. He is considered the greatest all-rounders of all times. He married Romi Bhatia in 1980 and was blessed with a baby girl named Amiya delight, who was born on 16 January 1996. Subsequently, Amiya has starred as an assistant director in his father’s biopic title ‘83’.

One of the most lovable Jodi of Virat Kohli and Anushka Sharma has shown the world that they...
Entertainment

The ladies are winning! No longer are Bollywood actresses merely screen seductresses. Today, they play intense roles (like...