Taylor Swift is among the most celebrated singer-songwriter of the current era. She has redefined the music industry with her cult hits. The 32-year-old has already climbed up to the top of the international music industry, with almost all of her recent tracks going global in an instant. She has sold over 200 million records worldwide and rightly won countless awards, including 11 Grammy Awards, an Emmy Award, 34 American Music Awards and 29 Billboard Music Awards- which are, by the way, most for a woman. Taylor Swift officially began her music journey in 2004 at just the age of 15 years. Since then, she hasn’t looked back at all in her life as one of the most popular musicians of all time. Almost all the details about her personal and professional life are known to the public, but we have managed to scrape 10 facts that you probably don’t know about her. Here Are The Top 10 Unknown Facts About Taylor Swift:

1- She was named after a singer-songwriter

Probably it was written in the stars that Taylor Swift would become a singer-songwriter. Her parents named her after the American singer-songwriter James Vernon Taylor. For those who don’t know, James Taylor is a 6 times Grammy winner whose name was inducted into the Rock and Roll Hall of Fame in 2000. Taylor Swift has managed to surpass the legacy of this legend by selling almost 100 million more records than him and winning many more musical awards than him.

One way or another, we all need a source of inspiration in our life to take that leap of faith in order to shape our destinies. What might seem to be trivial to someone can be a huge source of motivation for someone else. In Taylor Swift’s case, her motivation to pursue a music career came from a documentary about Faith Hill. She was convinced after watching the documentary that she needed to move to Nashville in order to pursue her dream. Well, the rest is a history we all know.

3- She is the first female country-music artist to write or co-write every track on a U.S. platinum-certified album

Taylor Swift has achieved many mind-boggling feats in her career, but probably her most impressive achievement came in the starting phase of her career. Her eponymous debut album Taylor Swift was released in 2006 and peaked at number five on the U.S. Billboard 200 chart, where it stayed for 157 weeks to set the longest stay on the Billboard chart in the 2000s. Swift also became the first female country music artist to write or co-write every track on a U.S. platinum-certified album.

Taylor Swift released her second album Fearless in 2008, in which five songs- Love Story, White Horse, You Belong with Me, Fifteen and Fearless were released. These songs helped Swift gain worldwide recognition. Love Story peaked at number one in Australia and also became the first song by a country artist to top the Billboards Pop Songs Chart. Just to let you know, Fearless was the top-selling music album in 2009. 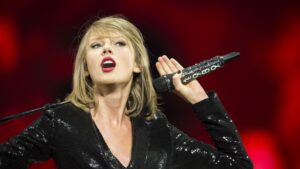 5- She has also worked in movies and tv shows

Along with having a successful career as a music artist Taylor Swift has also ventured into the world of acting. She made her big screen debut with the romantic drama Valentine’s Day (2008), which featured an ensemble cast that included Jessica Alba, Ashton Kutcher, Bradley Cooper, Anne Hathway, Julia Roberts, Jamie Foxx and many other known Hollywood superstars. Swift has also appeared in tv shows. She made her debut on the small screen in 2009 in CSI: Crime Scene Investigation.

SNL or Saturday Night Live is a late-night comedy show that has been going on since 1975. The show is one of the most popular and probably the longest comedy shows on American television. However, surprisingly before Taylor Swift wrote her own opening monologue for SNL in 2009, no other celebrity had ever done the same in the past. Quite astounding, isn’t it?

7- She had a fling with One Direction’s Harry Styles

Harry Styles, who now operates alone, was one of the lead singers of the famous music band One Direction, which disbanded in 2016. However, during his stint as the leading singer of the boy band, he became a crush of many beautiful girls all around the world. Probably, Taylor Swift was one of the girls who loved his boyish charm as the duo dated for about four to five months from late 2012 to early 2013.

8- She removed her entire catalogue from Spotify in 2014

Taylor Swift is a big advocate for singers and songwriters to get adequate payments for their services. In 2014 she made a brave choice by removing her entire catalogue from Spotify to highlight that the ad-supported version of the app was undermining the premium version, which paid higher royalties to the songwriters. She returned to Spotify and other music apps in 2017.

Taylor Swift’s grandmother Marjorie Moehlenkamp Finlay was an American opera singer who performed various concerts throughout her life. She is probably the first person who introduced Taylor to music. Unknowingly she played a big part in shaping the legendary career of Taylor Swift.

10- She first identifies herself as a songwriter

Even though Taylor Swift is known throughout the world for her beautiful voice, the singer-songwriter does not believe it to be her strongest musical ability. She has stated on numerous occasions that she likes to be first referred to as a songwriter instead of a singer. In 2011 Taylor Swift gave an interview to The New Yorker in which she said that her voice is just a way to get her lyrics across to the people.

Since you are here, let us tell you that Taylor Swift is releasing her next album, Midnights, on October 21, 2022. This will be her tenth studio album. Recently in 2022, she released the song Carolina which was part of the soundtrack of the film Where the Crawdads Sing. Below you can listen to the track before departing on your new journey.

Welcome to the Diljit Dosanjh fan club if you liked Ik Kuddi from Udta Punjab and have been...
Talent

No compromise on basic amenities provided to the celebrities and effective crowd management security are two of the...

With shows like The Boys, Tom Clancy's Jack Ryan,...