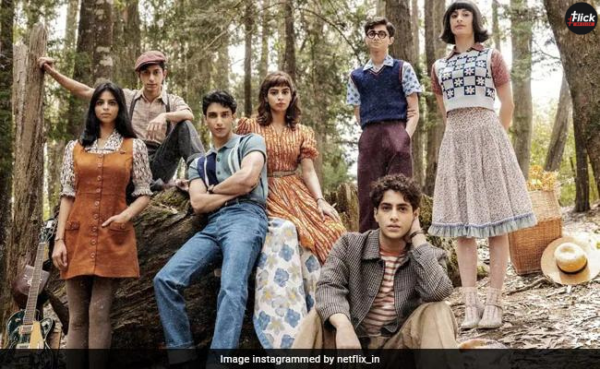 Khushi Kapoor, Suhana Khan, and Agastya Nanda are all scheduled to star in Zoya Akhtar’s next Netflix drama The Archies. Archie Andrews and his gang from the comic books will now be seen in an OTT film adaptation in India. The live-action musical, directed by Zoya Akhtar, is set in 1960s India. On Saturday, May 14, the film’s first-look teaser and poster were released. Tiger Baby and Graphic India are funding the Indian adaptation of the legendary comics. The teaser introducing the film’s cast was released on May 14.

The Archies teaser And Poster are Out Now

On April 18, the Archies took the stage. On Saturday, May 14, Netflix India’s official Twitter account published the first-look poster for The Archies. “Get your picnic baskets and your cutest outfits ready, because we’re going to meet the Archie clan!” The cast of THE ARCHIES, a Zoya Akhtar film, is revealed.

The Archies also stars Mihir Ahuja, Dot, Vedang Raina, and Yuvraj Menda, in addition to Suhana Khan, Khushi Kapoor, and Agastya Nanda. The cast is shown having a good time in the woods in the teaser.

Amitabh Bachchan is a pleased grandfather, as his grandson Agastya Nanda will star in The Archies. “Another SONrise.. my GrandSON.. all the blessings Agastya.. love you (sic),” he said with a poster for the Zoya Akhtar film.

Filming of The Archies Filming Began

Reema shared a photo of clapboard with information on The Archies’ first shot on her Instagram account. “#Archie’s #shootstarts #TigerBaby’s first solo production #partnerincrime @zoieakhtar @Netflix (sic),” she said in the description. Farhan Akhtar quickly re-shared the image on his Instagram story and wished the team well. The trailer, which revealed the cast members of The Archies, was posted by Netflix India.

The sun is shining, and the news is spreading! Come meet your new acquaintances. “Introducing The Archies’ cast, helmed by the brilliant Zoya Akhtar (sic),” read the caption. Suhana Khan is Shah Rukh Khan’s daughter, while Khushi Kapoor is the younger daughter of Sridevi and Boney Kapoor. Amitabh Bachchan’s grandson is Agastya. According to sources, Agastya will play Archie Andrews, while Khushi and Suhana will play Betty and Veronica, respectively.

Monsoon is one of the best seasons of the year to visit every exotic corner of India which...
Entertainment

SRK starrer Pathaan has already sold 2.4 Lakhs advance tickets in India in just a day, and the...
Entertainment

Earlier this week, Hitesha Chandarnee, a social media influencer, took to Twitter a video of her getting assaulted...
Technology

Google I/O 2022 was a revolutionary event in which many never before seen technological advancements were revealed to...
Entertainment

The fun of Holi has not ended yet as new movies and shows will be releasing this weekend...
Technology

Best Smartwatches For Women In India: Top 05 Picks For 2022

Pockets are a myth in women's clothing and sometimes even bags. From morning workout routine to running to...
Trending

The official Melbet.com site is happy to offer all its users a huge selection of exciting games and...