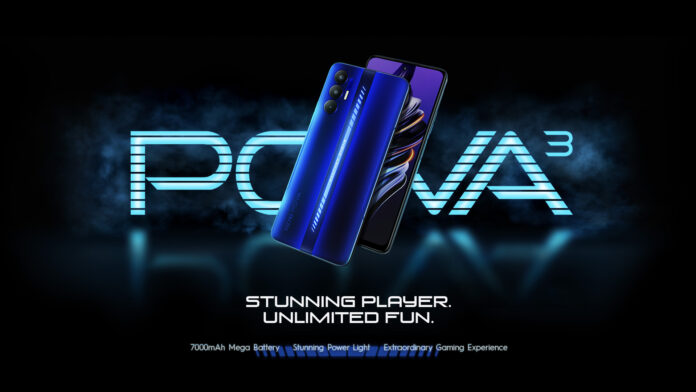 Tecno Pova 3 with 7000mAh Battery and Panther Gaming Engine 2.0 alongside HyperEngine 2.0 Lite Game Engine was launched in India on 20th June 2022. The highly impressive smartphone with an abundance of features starts at ₹11,499 in the Indian market. It is available in three colours- Electric Blue, Tech Silver and Eco Black.

Tecno Pova 3 flaunts a 6.9 inches Full HD+ Dot-in Display with an impressive refresh rate of 90Hz per second. The smartphone offers a rich and immersive gaming experience with one of the smoothest interfaces in this segment. It has a resolution of 1080*2460 pixels.

Tecno Pova 3 comes equipped with a 7000mAh Mega Battery that can last for 8 hours of gameplay or 20 hours of YouTube streaming, or 50 hours of music playing. It supports 33W fast charging and also works as a power bank in case of emergency by having the reverse charging support of 10W.

At the back, Tecno Pova 3 features a 50MP Triple Rear Camera that comes with Quad Flash. The smartphone offers an option of recording 4k videos in time-lapse. There are also essential features like HDR mode, Panorama mode and more. On the front, the smartphone packs an 8MP camera with Dual Flash.

Tecno Pova 3 operates on the HIOS system that is based on Android 11. The smartphone is powered by a MediaTek Helio G88 processor and also has Panther Engine 2.0 and HyperEngine 2.0 Lite Game. Tecno promises that it consumes very low amounts of power due to the addition of Panther Engine and delivers a great experience and performance for the users while gaming.

It’s time for tech enthusiasts to rejoice as Motorola announces over the weekend that a new smartphone will...
News

Google has finally unveiled the new Google Pixel smartwatch series for its users worldwide. After many speculations been...
Technology

BoAt has come up with its latest boAt Airdopes 201. Every industry has a company that could be...
News

Up until March 2020, many smartphone brands have experienced major leaks of specifications and render images. Yesterday, Xiaomi's...
Technology

If you were waiting to buy a new beast then the time has come as Realme X7 Max...
Technology

With 2021 coming to an end, various social media platforms have introduced "the best" regarding various things. Taking...