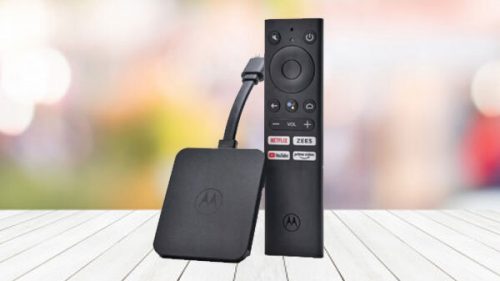 Motorola has launched the new ‘Motorola 4K Android TV Stick’ in India at a price of Rs. 3,999, and will be first seen in the third week of March only on Flipkart. This is a newly designed device that is meant to be used and install in 4K HDR TVs to support external smart connectivity without any technical hindrance. This streaming device is supported with Android TV 9 Pie, providing you a collection of the best streaming platforms like Netflix, Amazon Prime Video, YouTube, and Zee5. Get ready to watch your favorite shows and movies up to Ultra-HD (3840X2160) resolutions, along with supported HDR format.

Flipkart adds another range of streaming sticks to the list and this time Motorola 4K Android TV Stick is the newly added device on the e-commerce website. The device has been launched with final pricing of Rs. 3,999 and according to the reports it will be launched in the third week of March 2021. It is expected that Motorola 4K Android TV Strick will go head-on-head with other competitive companies including Mi Box 4K and the Amazon Fire Stick .

It supports Android TV 9 Pie and it is designed for 4K HDR video streaming at 60fps. It gives you access to the prime apps and allows you to stream on platforms like Netflix, Amazon Prime Video. YouTube, and Zee5. The device is said to be powered by a 2GHz Cortex A53 quad-core processor, with 2GB RAM and 16GB ROM. It is also featured with dual-band Wi-Fi and HDR support for the HLG and HDR10 formats.

A special thing about this TV Stick is that it has a built-in Chromecast, and access to Google Assistant through remote for making an enhanced search option for the users. The remote consist of four hotkeys for the top-notch streaming platforms like Netflix, Amazon Prime Video, YouTube, and Zee5. It will also be able to get access the Google Play Store for Android TV for downloading additional apps and games on the TV. This device has to be plugged-in to the HDMI port of the TV and will smoothly function through Wi-Fi and Bluetooth, soon it gets connected.

So, what are you waiting for? Get ready to order this extraordinary Motorola 4K Android TV Stick soon as it gets launched on the e-commerce website and enjoy your favorite shows and movies. Also, Flipkart is proving multiple payment options for this device.

Motorola Moto is a range of Android mobile phones  manufactured by Motorola Mobility, a subsidiary of Lenovo. The...
Technology

Moto E7 which was being teased by the company for its camera in the given price segment is...
Technology

Moto E7 which was being teased by the company for its camera in the given price segment is...
Technology

Motorola's smartphone Moto G 5G has officially launched at 12pm in India after such long wait! The phone...