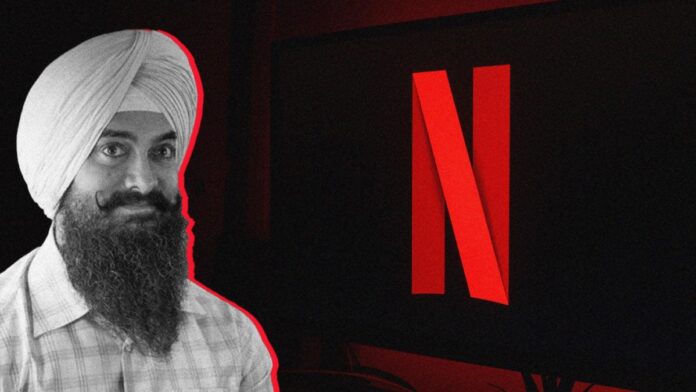 Netflix’s official Twitter page announced that Aamir Khan’s latest film, Laal Singh Chaddha, has appeared on the streaming service. The announcement comes just two months after the film’s theatrical premiere in August 2022. Before its release, the filmmakers made no explicit announcement that the film would be available on Netflix. The film received a lot of attention both before and after its broadcast, and the criticism is still going on with the OTT release.

The movie was scheduled to be released six months after its original debut. Unfortunately, the Hollywood replica was only available on Netflix for two months. Many fans turned to social media to criticize the filmmakers after Aamir Khan stated in an earlier appearance that he would not allow his films to be released earlier than 6 months.

After a theatrical premiere on August 11, 2022, Aamir Khan‘s Laal Singh Chaddha is now available on Netflix’s OTT channel. The rom-com, created by Advait Chandan and featuring Kareena Kapoor Khan and Ahmad Ibn Umar, is a supposed replica of the 1994 Hollywood classic film Forrest Gump. Unfortunately, the film did poorly at the box office. The film became Aamir’s lowest-grossing film in over a decade. Strangely, the film is now receiving positive reviews following its OTT release.

Netflix made the official announcement before releasing Laal Singh Chaddha:

Previously on Twitter, Netflix India released an official statement and published the film’s image. The poster features Aamir and Kareena in the main image, with a still from the movie on the side. The film can also be seen in Hindi, Telugu, and Tamil. “Keep your popper golgappas prepared because Laal Singh Chaddha is currently streaming,” the post added. Check out the post below.

According to early reports, Laal Singh Chaddha might be available on a streaming service next year. The creators opted to release it sooner owing to poor results. Laal Singh Chaddha finally inked a contract with Netflix after a two-month wait. The film was a box office flop, earning only Rs 130 crore globally against a stated expenditure of Rs 180 crore. The film earned less than Rs 70 crore in India.

MASTERPIECE. This gen’s most underappreciated film. The story, screenplay, direction, acting, songs, and music were all excellent. A once-in-a-generation heartfelt film “Person on Twitter wrote “A restrained and subtle Laal done by Aamir while still retaining onto his kid look innocence and curiosity,” said another. I’m not sure why anyone felt it was a good idea to pursue the animated route for most of the film, but I’ll always remember the last hour of #LaalSinghChaddha.”

“Saw #LaalSinghChaddha I still don’t understand why this movie flopped.  What a movie star! It choked me immensely, especially the climax where Laal talks to Rupa under the tree. I know for a fact that many people would appreciate LSC when they view this on OTT “another Twitter user stated.

The social media user went on to say, “A particular mention goes to the writer, @atul Kulkarni sir…you have written a very truly fantastic film that will be remembered and loved in the future. As an artist, I understand how hard it is when your work is not acknowledged, but good work is usually praised sooner or later, and LSC is one of the best films to come out this year.”

Read More: Laal Singh Chaddha Review: A Bit Too Much of A Faithful Adaptation

Netflix is one of the best when it comes to content and producing originals. But there’s no such...
News

Netflix has been releasing one of the best shows all year round and people are craving for more...
Offers

Airtel is all set to give its users more than a fantastic internet experience. Yes! With the new...
Entertainment

Caught the Monday blues and wish to distract yourself from the week that lies ahead? Here is a...