Khuda Haafiz 2 Review Punchline: The emotional tale filled with incredible action scenes and unpredictable twists and turns has perhaps the best storyline for an action-thriller in 2022. Vidyut Jammwal is, as usual, impressive with his unparalleled martial arts skill, while Shivaleeka Oberoi nails the emotional scenes in this film.

Khuda Haafiz 2 Storyline: The movie starts off the plot where the prequel had left the story of Sameer (Vidyut Jammwal) and Nargis Chaudhary (Shivaleeka Oberoi). The pair survived the ruthless criminal world of flesh traders and finally seemed to have a happy life with their adopted daughter Nandini. However, things go awry when a few snotty students from Nandini’s school kidnap her. What happens next forms the core of this film.

Director Faruk Kabir had a clear idea about what themes he wanted to touch with this movie. The film runs on a basic philosophy of good versus evil, but the way of conveying the storyline is something that the viewers find interesting and exciting. The movie maintains a tempo and continues to deliver on its basic premise. You will find yourself rooting for the main characters in this film.

The stereotypical themes like corruption and evil vices of society have been presented in a manner that viewers never find boring. The cinematography is excellent and helps in highlighting some of the best action sequences ever in Bollywood. However, one should keep in mind that although the film has some unique action events, the movie focuses more on the emotional aspect. 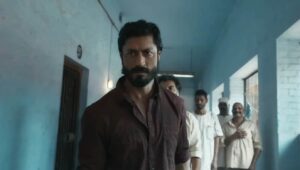 Those who are expecting the movie to be another one of the films which display only the martial arts skills of Vidyut Jammwal will be pleasantly surprised by the depth of the actor’s character in this film. For the first time in Bollywood, Vidyut has successfully handled the emotional aspects of a character. His acting does not look forced, and you can connect with his portrayal of a troubled father and husband.

Shivaleeka Oberoi’s character could have been written a bit better. The audience may find some of her actions and reactions unjustifiable in the film. Even then, she has that aura that will make you cry with her at some moments in the film. Sheeba Chaddha is flawless in her role as the antagonist Thakur Ji. Dibyendu Bhattacharya has transitioned skillfully from web series to movies in Khuda Haafiz 2.