Rashtra Kavach Om Review: Aditya Roy Kapur and Sanjana Sanghi starrer is a treat for action lovers. The movie is high on the action; as it turns out, more than storytelling, it relies on fast-paced action sequences to become a hit. The high-octane action scenes are done quite well, and the cinematography lives up to the expectations. 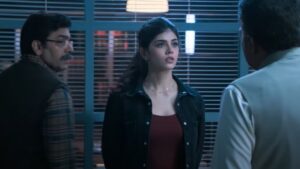 Rashtra Kavach Om Story: Aditya Roy Kapur starrer tells the tale of an Indian spy who has lost his memory due to a horrible incident. The movie is about Om, played by Aditya Roy Kapur, who is on the hunt to find Dev. He goes to great lengths to find Dev in order to get the kavach or shield made by Dev.

The kavach can be very useful for the country as it has some special qualities. However, while on the mission, Om gets shot in the head and remembers only one thing from his childhood. Will that be enough for him to complete the missions? The answer to this question makes up the entire story of the film. If you like action-packed movies and do not really give a damn about the storyline and narrative, then you are in for a treat, as this film has everything you need to satisfy your urge for thrilling sequences.

The film may remind you of Tiger Shroff’s Baaghi with its over-the-top storyline that puts only one person against one too many. Rashtra Kavach Om thrives on two things one is obviously the action, and the second is the performance of the cast. In particular, Aditya Roy Kapur and Sanjana Sanghi have done well to erase their image of romantic sweethearts.

Aditya Roy Kapur has experimented with the action genre for the first time, and we think he has all the makings of being an exceptional action hero. Even though the movie goes wayward with its storyline and becomes almost too predictable at times, Aditya does not let the viewers down as he shines phenomenally in his first attempt at action.

Sanjana Sanghi, who was last seen in Dil Bechara, has given a refreshing performance. The outlook of her being a promising newcomer are undoubtedly high. Veteran actors Prakash Raj and Jackie Shroff are excellent as usual. There is not much to complain about the cast and their performances.

However, the movie could have done much better with the story and narrative. A viewer who has seen a few action movies can completely predict the next turn of events. This is one of the points that the film should have worked on.

Veera Simha Reddy Review: Nandamuri Balakrishna shows why he is rated as one of the top South Indian...
Entertainment

Yashoda Movie Review: Samantha Ruth Prabhu is excellent in this engaging thriller that keeps you hooked on a...