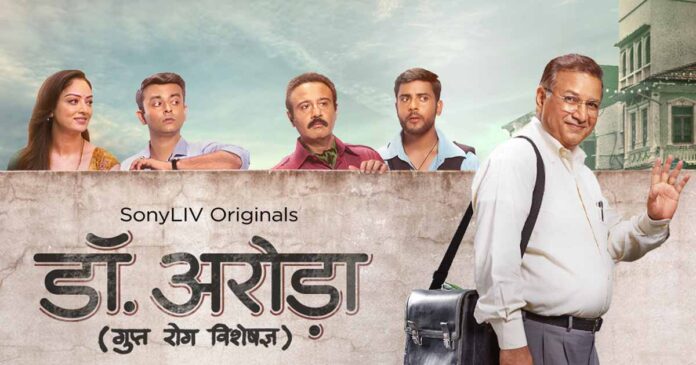 Dr Arora: Gupt Rog Visheshagya Review Punchline: The series created and written by Imtiaz Ali has approached the taboo concept of sexual problems with a glass of serious issues instead of labelling them as a stigma. The show has an earnest cast that wonderfully works in favour of its quirky storytelling that has a doctor plagued by the love of his ex-wife helping others out to save them from similar outcomes.

Dr Arora: Gupt Rog Visheshagya Story: The story set in the 90s of Madhya Pradesh follows a sexologist who manages quite a few clinics in which he treats people with ‘gupt rog’. He is troubled by his own love for his ex-wife and even stalks her for that. The characters he treats form the core of the story with their own tales of embarrassment. Will Dr Arora be able to destigmatise the issue of sex-health problems for his patients and for people in general? This question forms the core of the show. Written and created by Imtiaz Ali, Dr Arora is another one of his attempts to tackle an idiosyncratic subject related to sex after his critically appraised series She, which recently dropped a second season on Netflix. Imtiaz has managed to bring out the taboo of sex problems without painting them as topics of behind-the-door discussions. Kumud Mishra has played his part earnestly, and viewers tend to get sympathetic toward him. However, the stalking of his ex-wife (Vidya Malvade) is a little uncomfortable and creepy. Other than that, his role is written perfectly.

The series has its fair share of fun and lighthearted moments and never tends to be overly emotional and poignant. The underlying seriousness is always looming in the background, but the eccentric tales of characters shown as patients of Dr Arora will grow on you with their own strange problems and issues. You will also find that the characters are growing and not stagnant in the series. The series continues to infuse moments that will make you laugh and cry at the same time. (Ok, not simultaneously but in turn, definitely)

What’s applaudable about Dr Arora is that it does not resort to cheap tactics of employing double-meaning jokes and a ton of sexual imagery to get forward its message. The show completely relies on the story, its actors and classy but quirky humour. If you liked the recently released Janhit Mein Jaari, you would love to watch this latest offering from SonyLIV. Overall, we rate the web series highly and completely recommend at least a single watch.

When and Where to Watch Shark Tank India Season 2

Despite the tremendous success of Bard of Blood Season 1, fans are now demanding the release of Bard of...