Hit The First Case Review Punchline: Rajkummar Rao excels as a troubled cop who is dedicated to solving a kidnapping. The movie keeps you guessing without even having a plot that will stun the lights out of you. The cinematography, the visual effects, the art of storytelling, and a unique way of constructing the plot line make Hit The First Case a treat for thriller fans. 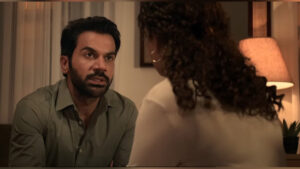 Hit The First Case Story: The movie follows Vikram (Rajkummar Rao), a cop troubled by the demons of his own past. He is on the hunt for a kidnapper who has abducted two females. One of them being his girlfriend (Sanya Malhotra). The movie is a remake of the South film of the same name. It is directed by Sailesh Kolanu, who also directed the original film. The film leaves a big cliffhanger at the end to set the stage for a sequel.

The film will leave you craving more at the end. Director Sailesh Kolanu has perfected the art of keeping the viewers engaged by revealing bits and pieces of information here and there but not giving away the ultimate revelation about the plot. You will find yourself predicting a lot of scenes, but there will always be an underlying sense of whether you are rightly guessing everything or the film is letting you to. More than its character, the film’s storyline is a mystery for viewers. Also Read: 10 Best Rajkummar Rao Movies that You Need to Watch at Least Once

Those who love to watch thrilling dramas that they could not find answers to will be excited and thrilled about this movie. The movie has left many things unanswered, which might keep you awake for a day or two after you finish the line. The stage for a sequel is set with perfection. Viewers may see the character of Rajkummar Rao come face to face with the similar character of the South original. Sailesh Kolanu surely knows how to build up tension and drama.

Rajukmmar Rao’s intensity which was teased in the trailer is up to the mark. He is clearly the biggest positive in this film. However, other than being intense, he delivers in the scenes where he acts vulnerable, clever, smart and hilarious. He is a complete package. Sany Malhotra has justified her limited screen time with her performance. The script demanded very few scenes from her, and she nailed them to perfection.

Previous articleShabaash Mithu Review: Taapsee Pannu Registers a Massive Victory with this Biopic
Next article8 Most Underrated Bollywood Sports Movies that will Inspire You
Virat Verma

It's not like the movies lacked big names or spectacles. Large-scale thrillers have struggled to make money at...
Talent

Brahmastra, directed by Ayan Mukerji, is one of the 2022 most awaited movies. which stars Ranbir Kapoor and Alia...