Kapil Sharma is one of the country’s best comedians and hosts right now. While hosting his weekend program, The Kapil Sharma Show, he engages with a variety of celebrities from the cinema, television, sports, and music industries. Kumar is a frequent guest on the show. Akshay Kumar has various releases throughout the year and comes to The Kapil Sharma Show (TKSS) to showcase them. 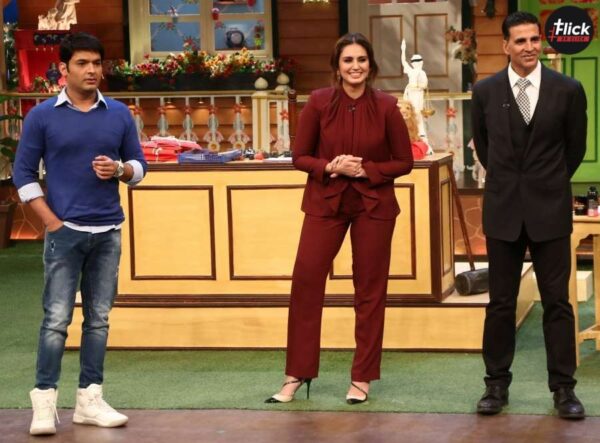 Akshay Kumar performed on TKSS during the initial season to advertise his film, Jolly LLB 2. This is the episode featuring the ‘Jolly LLB vs. Kapil Sharma’ part. It was one of the show’s funniest moments. Sugandha Mishra’s performance as ‘Teacher Vidyavathi’ set the tone. Kapil and Akshay even interacted with the audience during the portion. Click here to watch the full Episode.

To promote his movie, Rustom, Akshay Kumar came on the inaugural season of The Kapil Sharma Program (TKSS). This is a piece in which Kapil Sharma confronts the fit and handsome performer Akshay Kumar, who gets chastised in his business for being unusual. In the episode, Kapil Sharma as the lawyer and Chandan as the judge prosecute this issue for City Cable. Sunil Grover, including the rest of the show’s crew, participates in the section by acting as the viewer and answering questions. It was the most enjoyable part of the episode. Moreover, Click here to stream full episode featuring Akshay in TKSS. 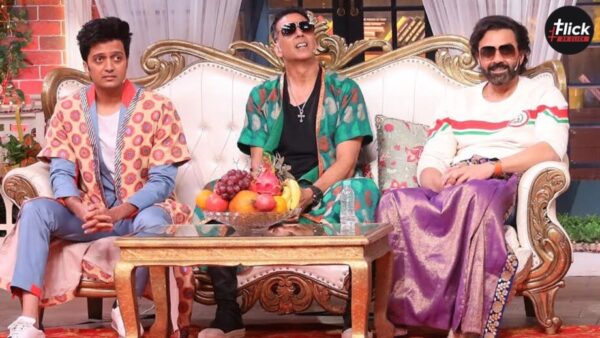 To advertise his film Housefull 4, Akshay Kumar came on the season 2 of The Kapil Sharma Program (TKSS). The episode featured the complete team of the film, including Riteish Deshmukh, Bobby Deol, Kriti Sanon, Kriti Kharbanda, and Pooja Hegde. Hence, the episode’s best moment was when Akshay Kumar pushed Kapil Sharma to numerous workouts, which Kapil almost failed to complete. So, Click here to stream full episode featuring Akshay in TKSS

Recently Akshay Kumar and Kapil Sharma called Bewafa to each other

The Bollywood actor posted a video in which he and Kapil discuss who might be ‘bewafa’ called ‘unfaithful’ in one’s life. As Akshay takes the lead in explaining, he points at Kapil and explains, “Bewafaa koi bhi ho sakta ha, dost bhi host bhi.” As they proceed, Kapil responds similarly and indirectly refers to Akshay as a “bewafa senior.”

For the uninitiated, Akshay became enraged with Kapil after a behind-the-scenes video from the program was leaked on social networks. It was a video in which the TKSS host insulted Akshay during his interview with Prime Minister Narendra Modi. According to reports, the actor asked the TKSS crew to remove a specific segment from the program. Regardless, it was widely shared on social media and drew everyone’s attention. Outraged, Akshay Kumar refused to cooperate with Kapil until he received clarification.

Kapil stated via Twitter a day after the reports emerged. He assured supporters that he and Akshay Kumar were OK and that they will be filming together shortly.

The Kapil Sharma Show Comes to An End: Know Which Show Will Replace It

One of the most classic comedy TV shows is The Kapil Sharma Program. The cast spares no effort...
Entertainment

Zwigato is an upcoming Hindi movie featuring the comedian Kapil Sharma in the lead. The film's name is...