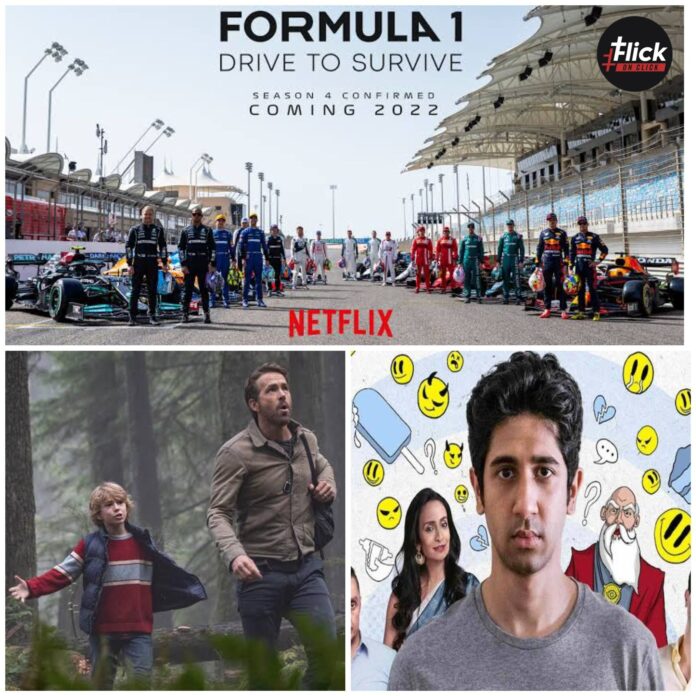 A new month means fresh Netflix material. Following a month of thrilling new movies and TV launches in February, the streaming platform has a handful of interesting new movies and Television releases planned for March. As the OTT behemoth, Netflix never fails to dishearten us on both fronts regional and international premieres. we’ve compiled a list of everything from movies to web series that will be available on the  Netflix site in March 2022.

Ray, a befuddled 24-year-old man who makes all the wrong moves in search of love, is the episode’s main character. Zoya Akhtar and Farhan Akhtar, together with their respective production businesses, are collaborating with Netflix India on a humorous adult comedy-drama. Rahul Nair will create and produce the show, which will showcase Jim Sarbh, Ankur Rathee, and Dalai in key parts. On March 18, 2022, Eternally Confused and Eager for Love will be available to watch on Netflix.

When their supposedly fearless commander self-destructs, a group of unstable warriors must face the world’s and their growing evil. The show, produced by Adi Shankar, stars Diamond Dallas Page, Sharni Vinson, and Derek Mears in major roles. The Guardian of justice is already released on 1st March 2022, you can watch it now on Netflix.

Ryan Reynolds reteams with Free Guy filmmaker Shawn Levy for this sci-fi thriller, which follows time-traveling pilot Adam Reed as he travels from 2050 to 2022 to face his deceased father (Mark Ruffalo). There, he enumerates the assistance of a young version of him (Walker Scobell). There’s a lot of future tech in this, including what appears to be a rip-off of the dual saber. Hence, the Adam Project is one of the latest Netflix movies that will be available to stream on 11th March 2022.

documentary series, produced in partnership with Formula One, features behind-the-scenes footage from the world championships. The long-awaited season 4 concentrates on the accomplishments of the previous 3 seasons as well as the behind-the-scenes action that led to the thrilling 2021 triumph. The documentary will be available on Netflix on 11th March, 2022

Were you truly in affection with Simon and Daphne Basset? If your pulse missed a heartbeat, you know that the approaching month will be filled with the best material for you. This historical drama series is returning to our tv screens with a brand-new chapter. While the previous season centered on Daphne and Simon, the next edition will center on Anthony, the eldest Bridgerton boy. We shall, however, regret Simon Basset’s on-screen appearance. Bridgerton Season 2 is going to release on Netflix on 25th March 2022.

When a WWII bombing operation accidentally strikes a classroom full of children, the fortunes of numerous Copenhagen citizens intersect. The war thriller, based on actual stories, features Bertram Bisgaard Enevoldsen, Ester Birch, and Ella Josephine Lund Nilsson as the key characters. The Bombardment is one of the best action Netflix movies that is going to release on 9th March 2022.

Leyla, who is lonely, unemployed, and in her thirties. So, She sets out to remake herself and find some happiness amid her family’s efforts to recouple her. The lead actors in the romantic Comedy-drama are Maryam Hassouni, Nasrdin Dchar, and Vincent Banic.

After a horrible incident in their small community reveals hidden dangers and fatal truths, the lady pieces together her mother’s sordid history. The thriller, directed by Charlotte Stoudt, stars Toni Collette, Bella Heathcote, and Jessica Barden in important roles.

Are you in the mood for a good thriller but don’t know what to watch? Netflix has a...
News

The streaming giant, Netflix has launched a low-cost testing subscription plan in the country. Goes by the name...
News

Kapil Sharma, one of the most popular entertainers on television, has made his Netflix web premiere with I...
Offers

The new year has arrived and with this year, you would want to spend some time worrying less...