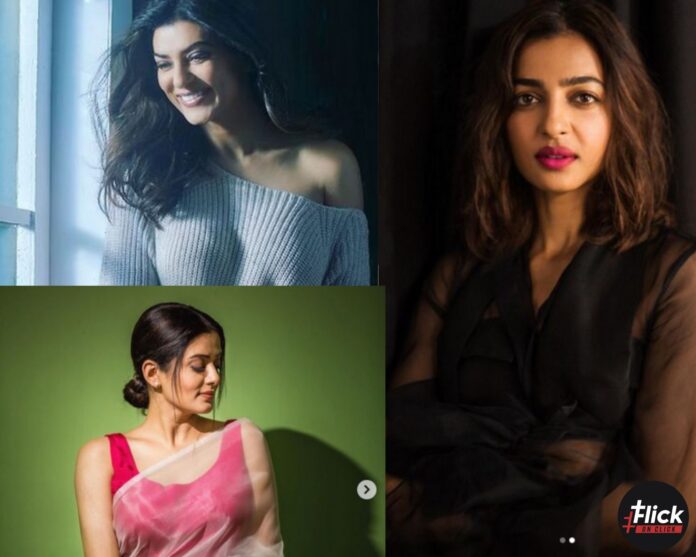 OTT platforms have helped reignite the careers of many Bollywood actresses who were thought to be done with their stint of acting in movies. Veteran actresses like Karisma Kapoor, Lara Dutta, and Sushmita Sen have clawed their way back to the top with the help of OTT platforms in the past couple of years. These actresses were almost on the verge of being forgotten in the film industry, but powerful scripts centring on them have provided them with a chance to showcase their talent again to the audiences. They have become one of the highest paid actresses on OTT due to their recognition as solid performers. Other than that, OTT has helped many new actresses to launch their careers with a significant boost. Shweta Tripathi and Shreya Dhanwantary are among the many actresses who have earned vast sums of money from their web series on different OTT platforms.

Here are the 10 highest paid actresses on OTT:

Radhika Apte has become a fan favourite after her influential roles in many Netflix web series and movies. Her career has been energised with her OTT stint, and now she is considered one of the best actresses in the Hindi film industry. She has starred in Lust Stories, Sacred Games, Raat Akeli Hai, Ghoul and more web series and films in her OTT career. For her role in the blockbuster thriller series Sacred Games, she charged a whopping ₹4 crore.

Susmita Sen, a veteran in Bollywood, began her second journey on the screen with the Disney+ Hotstar crime-thriller Aarya. She plays the titular role in the web series and earned enormous praises for her fearless character, who joins a mafia gang to get revenge for her husband’s murder. The series has been recognised worldwide and received a nomination for International Emmy Award in the drama category. Reportedly, Sushmita has made around ₹2 crores with her performance in the series.

The South actress with a vast fan following tried her luck in the OTT world with the web series The Family Man on Amazon Prime Video. She plays the role of Suchi, wife of Manoj Bajpayee’s character in the series. The show has become Amazon’s biggest hit in India and has been renewed for a third season. Priyamani charged ₹10 lac per episode, making her overall income hover around ₹1.9 crores through The Family Man.

Samantha is a top star in the South film industry. However, that did not stop her from experimenting with a challenging role in the series, The Family Man on Amazon Prime Video. She played the role of Raji in the show and was introduced as one of the core members of the cast in the second season. Samantha takes home ₹8 lac per episode, making her one of the highest paid actresses on OTT.

Dimple Kapadia is still shining with her impactful roles in the world of OTT. She appeared in the political drama Tandav on Amazon Prime Video. Gauahar essayed the role of Maithili Sharan in the series, which garnered her praises from both critics and viewers. For her role in the web series, she went to get a hefty sum of ₹3 lac per episode.

Dimple Kapadia is no beginner in the film industry. Her decades-long career is filled with many great movies. She recently also appeared in a Hollywood flick directed by the great Christopher Nolan. Kapadia was also part of Amazon’s political drama Tandav. She starred alongside Saif Ali Khan and Gauhar Khan in the web series. Reportedly she made a considerable amount of ₹2 lac per episode.

Rasika Dugal grabbed attention with her hot and slick portrayal of Beena Tripathi in Mirzapur. She plays the role of Kaleen Bhaiya’s wife in the series. Her character is an interesting one which generates excitement and curiosity. She will reprise her role in the third season. She makes a massive sum of ₹2 lac per episode.

The diva of the 90s in Bollywood, Karisma was one of the most prominent actresses during her prime. However, she got married and parted ways with the film industry. However, after almost a decade, she decided to return to the industry, but her movies failed miserably at the box office. Finally, she turned to OTT and made her debut with Mentalhood on ZEE5. She charges a handsome amount of around ₹1 lac per episode to become one of the highest paid actresses on OTT.

Shweta Tripathi is rapidly becoming a top star in the OTT world. Her character of Golu Gupta in Mirzapur has earned her huge praises. She has also appeared in web series like Made in Heaven, Escaype Live, TVF Tripling and more throughout her fruitful career. She makes a huge sum of ₹50k per episode with her OTT performances.

Shreya is an actress and model who has appeared in Bollywood and Tollywood films. She recently began her career in the OTT with the famous web series Scam 1992 on Sony Liv. The show became an overnight sensation, and her popularity went through the roof instantly. She is estimated to charge somewhere between ₹30k to ₹40k per episode.

Creed 3 is an upcoming Hollywood movie starring Michael B Jordan in the lead. Creed is a successful...