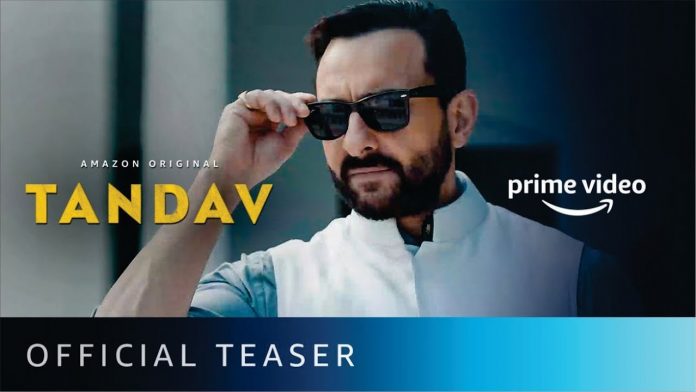 Tandav, a new web series on Amazon Prime is ready to make your weekend entertaining. Now, one more prominent thing that is happening along with Tandav is that Saif Ali Khan is coming back to the OTT space after Sacred Games. So, it’ll be a treat to watch him once again but this time in a negative space.

Moving onto the plot of the story, it is basically a political thriller where the whole series is a show of how one needs to be dirty to remain in the top ranks of politics. Amazon Prime’s Tandav is also filled with enough blood and gore that the audience who was in love with Mirzapur will be satisfied in here too.


There are other actors in major roles as well such as Tigmanshu Dhulia, Dimple Kapadia, Kumud Mishra, Zeeshan Ayyub, Kritika Kamra, and Sunil Grover. They all are in great roles but sometimes you’ll find them imitating their old roles. Such as Tigamansu will still remind you of his character from the Gangs of Wasseypur series. But, on the contrary, Sunil Grover will be seen in a role that he’s not expected of.

The writing of Tandav on Amazon Prime is great as it is penned down by Gaurav Solanki, who also magnificently wrote Article 15. Created by Ali Abbas Zafar, this 9 episode web series will make sure that you get to see the doors scenes in Indian politics.


Although Amazon Prime is constantly promoting its flagship show, Tandav as something unique, those who are critically reviewing it have the opinion that it’s nothing new. Meaning that the show is brought to us all the same material that we’ve already seen before in films like ‘Rajneeti’ and more.

But we’ll let you be the judge of that and as the show releases on 15th January 2021, go and watch it with friends or maybe all by yourself as well. But before that do remember to leave a comment down if you think Tandav on Amazon Prime is worth watching or not?