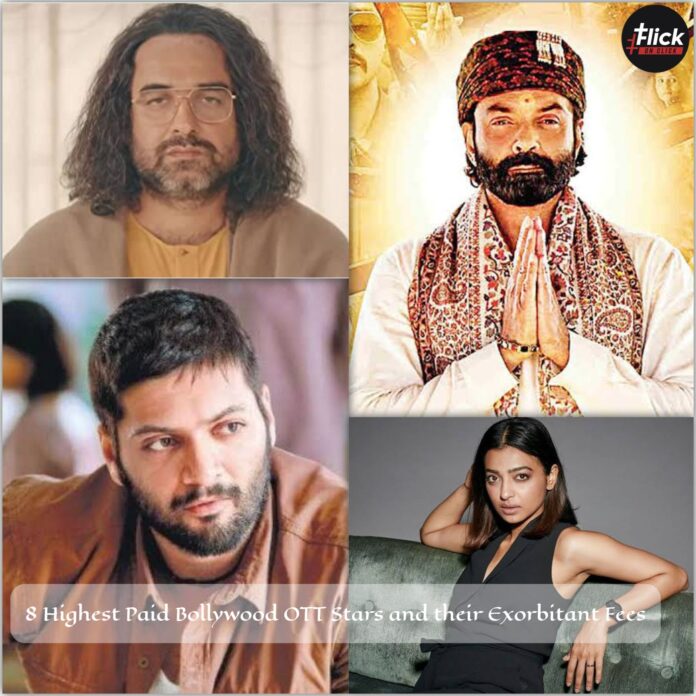 Bollywood is well-known throughout the world for its outstanding stars. Since its inception, it has produced some well-known performers. As a result, our Bollywood stars have begun to follow the trend of appearing on OTT platforms.

There was a time when the pay disparity between actors on the large and small screens was enormous. With the emergence of OTT, not to mention the growing popularity of OTT services in general, the gap has reduced, albeit it will never be completely closed (and rightly so). Indeed, some actors may argue that OTT has given them a second opportunity or that their audience in cinema has expanded as a result of their online achievement.

Pankaj Tripathi is one of the Bollywood stars whose profession is at its pinnacle right now. His meteoric rise has captivated audiences with back-to-back significant parts in films and series. Pankaj has been in several productions, including Sacred Games, Mirzapur, Kaagaz, and others. He received Rs. 12 crores for Sacred Games and Rs. 10 crores for Mirzapur’s first chapter.

Sacred Games, a Netflix Original show featuring Saif Ali Khan, was the actor’s first excursion into the OTT channel. He favors the term “online streaming entertainment” to “web series.” Saif earned Rs. 15 crores for the 8 episodes of the series. This series also assisted him in getting back on track with a great project after his most recent films underperformed at the box office. There have been two seasons of Sacred Games so far. Tandav, Saif’s follow-up to Sacred Games, is a new OTT film. Tandav received mixed reactions from the audience, as it may have offended some citizens’ religious sentiments.

Bobby Deol tried a comeback with Race 3, but the film was critically derided; nonetheless, this did not deter him. He later appeared in the MX Original series Aashram. In contrast, the melodrama not only helped him resurrect his career but also allowed him to earn the Best Actor OTT Series at the Dadasaheb Phalke International Movie Fest 2021.

Manoj Bajpayee has spent over two decades in the Bollywood industry. And his Amazon Prime exclusive web series The Family Man helped him to advance his career while also showing him in a positive light on television. He is a professional actor with great acting abilities. For season 2 of The Family Man, Bajpayee demanded Rs. 10 crores.

Priyamani has appeared in films in Telugu, Malayalam, Tamil, and Kannada Region. She also appeared in the 2013 film Chennai Express featuring Shah Rukh Khan and Deepika Padukone. She rose to prominence in North India after appearing in the Amazon Prime program The Family Man. In the web series, she plays Manoj Bajpai’s wife, Suchi. She gets paid Rs. 10 lac per show for season 2, which consisted of 9 episodes.

Radhika Apte seems to have registered a trademark with Netflix. Apte was one of the first Bollywood stars to sign up for the service. She has been in several obscene films and television shows, notably, Sacred Games, Raat Akeli Hai, Lust Stories, and Ghoul. For instance, she’s been branded “the usual Netflix chick.” For Sacred Games, she was paid the amount of Rs. 4 crores.

Ali Fazal was still a long way from achieving the popularity and acclaim he did after participating in films such as Khamoshiyan and Fukrey. At that moment, Mirzapur stood in his path. He was reportedly promised the part of Munna Tripathi, which was afterward performed by Divyendu Sharma. Ali was selected as Guddu Pandit in seasons 1 and 2, receiving Rs 12 lakh rupees every episode. Hence, Mirzapur was the show that enabled him to gain power.

Read More: How Much Do Bollywood Actresses Earn Per Movie In 2022

The girl on the train revolves around Mira Kapoor, who was a successful lawyer and a family woman,...
Offers