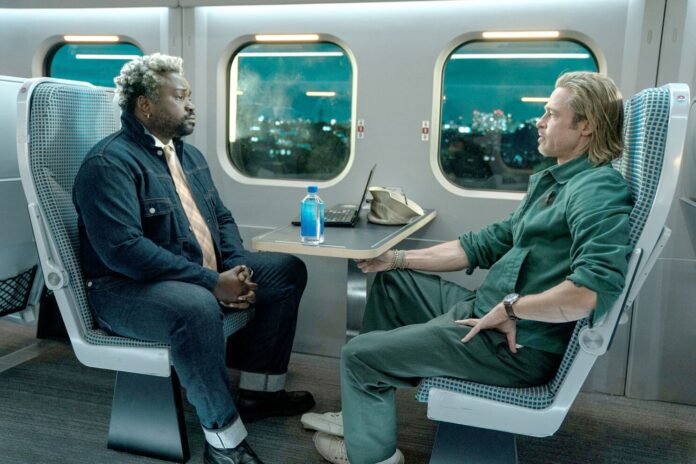 Set in a Japanese bullet train this Hollywood film follows an assassin who encounters unknown adversaries on the train. Will he again shed some blood to get the job done or will he avoid all of it somehow and do the job in a completely harmless manner? It’s one of the best Hindi dubbed Hollywood movies to watch online right now. You can find this film easily on websites like Fmovies and HDEuropix.

The second movie in the series Enola Holmes is just as intriguing as the first part. The film follows the sister of famous investigator Sherlock Holmes on her journey to becoming a specialised crime investigator like her brother. It’s surely one of those Hindi dubbed Hollywood movies online that you don’t wanna miss out on.

An eccentric billionaire kidnaps an author who writes about adventures and treasure hunts. He hopes to discover an ancient treasure with her help. However, he is not the only one after the treasure. If you are looking for something fun and exciting then you should definitely consider watching this Hollywood movie in its Hindi dubbed version online.

This recently released new version of Batman starring Robert Pattinson in the lead is the talk of the town for all the right reasons. It’s a fantastic movie. The film follows Batman in his investigation of finding the murderer behind the assassination of the Mayor of Gotham City. However, his investigation leads him to his own dark path. Surely, one of the most interesting Hindi dubbed Hollywood movies to watch online.

In Thailand, a group of young boys and their soccer coach are trapped in a cave and a rescue mission is being done to save them. However, the stakes are high as the flood is also entering the underground caves. Will they be saved or the floods will destroy their lives? It’s one of the best Hindi dubbed Hollywood movies to watch right now.

Spider-Man No Way Home is the latest addition to the Spider-Man franchise and this movie has broken all the records for the previous films in this franchise. Tom Holland has done a fantastic job and Tobey Maguire and Andrew Garfield have returned to make this part the most exciting one. It’s one of the best Hindi dubbed Hollywood movies to watch online.

What happens when an ordinary takes up killer machine guns and all sorts of weapons to reclaim what has been lost in his life? This is an exciting thriller and in many ways quite similar to the John Wick trilogy. You should surely consider adding it to the list of Hindi dubbed Hollywood movies to watch online.

Released in 2021 this Suicide Squad movie is quite fun and easygoing. Idris Elba and John Cena are breath of fresh air in this film while Margot Robbie is at her brilliant. The concept of the film is shallow but it’s meant to be enjoyed for a short while. If you are looking for two hours of pure fun then this is one of the best Hindi dubbed Hollywood movies to watch online.

A bank teller learns that he is actually a character in a video game. He then decides to write his own destiny by becoming a hero on his own conditions. It’s thrilling, fresh and exciting to watch. Ryan Reynolds is yet again perfect.

Also Read: 10 Best Hollywood Movies in Hindi on Netflix in 2022

What are some of the hottest and sexiest web series that you have seen with engaging plots and...
Offers

You might have subscribed to a monthly plan of one or the other OTT channels like Disney+Hotstar, Netflix,...
News

Have you ever wished you could be a part of the ongoing Met Gala's star-studded action? You may...
Entertainment

Hollywood sexy movie list is a compilation of the hottest and sexiest English movies that you can watch...