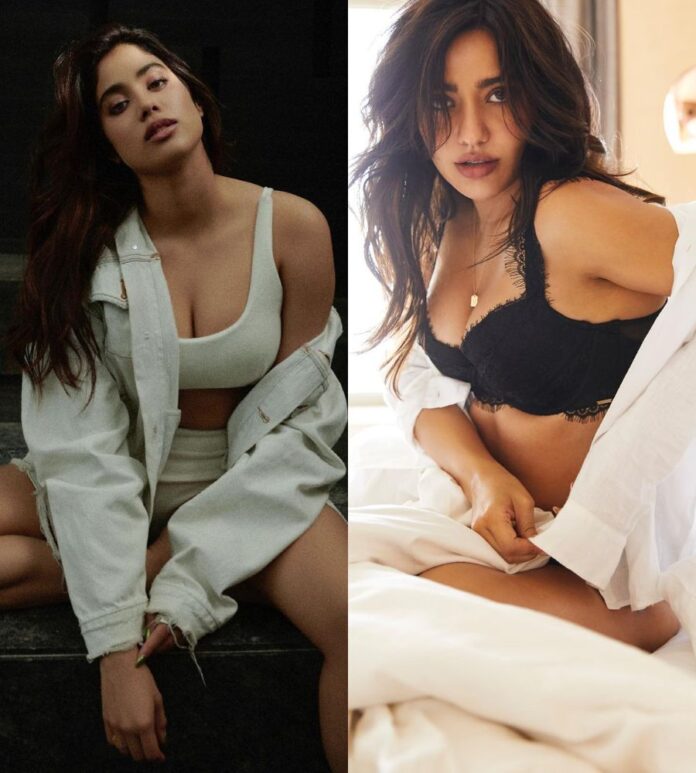 Janhvi Kapoor is without a doubt the hottest Bollywood actress in the film industry right now. Her epic transformation has shocked everyone and she never shies away from sharing her hot looks on social media platforms. Recently, she was seen in Mili- a suspense thriller that showcased she does not just have the beauty but also the skills that will make her one of the mainstays of the film industry in the upcoming years.

When Janhvi Kapoor debuted in Bollywood with the film Dhadak she was just an ordinary-looking actress but everything is completely changed now. She is perhaps the most searched hot Bollywood actress on Google. She has worked immensely hard on her fitness to attain the sexiest physique for a Bollywood actress.

Neha Sharma may have taken a backseat from Bollywood films but she is definitely one of the hottest Bollywood actresses. With an insane fan following on Instagram of over 15 million followers Neha Sharma is one of those actresses that has been recognised as a symbol of hotness in Bollywood. She was recently seen in a music video and a web series titled Illegal. She has also worked in famous Bollywood movies like Crook, Tanha Ji and more. With her sexy figure, she is mesmerizing fans on Instagram and you should definitely consider checking her out.

Esha Gupta is a hot Bollywood actress who has sensationalized social media platforms with her hot and sexy photos. She leaves no chance of sharing her sexiest images on the social media platform, especially Instagram. Esha has over 13 million followers on Instagram and the number is not coming to a halt any time soon.

Esha is currently working on the web series Aashram which premiers on MX Player. In the past, she has done hot roles in Bollywood films like Raaz 3, Jannat 2 and Rustom.

The Canadian-born actress and dancer Nora Fatehi is surely one of the sexiest and hottest Bollywood actresses right now. She has mesmerised fans with her hot dance in popular dance numbers like O Saki Saki, Kusu Kusu, Dilbar, Rock The Party and more. Nora also recently became the only Bollywood actress to be invited to perform at the Fifa World Cup ceremony. The hotness of Nora is known across the borders. She recently acted in the movie Thank God.

She is a sexy and hot Bollywood actress who deserves all the attention she gets. Nora has more than 43 million followers on Instagram. Her recently posted a video in which she can be seen dancing near the ocean is getting immensely popular owing to her bold avatar.

Disha Patani made her debut in the Bollywood film MS Dhoni: The Untold Story and since then she has often been hailed as India’s sexiest and most beautiful actress. Disha has worked in many box office successful movies like Baaghi 2 and Baaghi 3. It was recently reported that Disha Patani has broken up with her boyfriend Tiger Shroff. She is now the most loved single hot Bollywood actress in the film industry. Disha has more than 55 million followers on Instagram. She is next going to be seen in Yodha opposite Sidharth Malhotra.

Jacqueline Fernandez is the hottest and sexiest Bollywood actress who has arrived in the film industry from Sri Lanka. Jacqueline is nowadays involved in a controversy surrounding Rs 200 Crores but that does not stop the hot Bollywood actress from showcasing her hot and sexy figure in scintillating posts on Instagram. She has worked to be at the level where has reached today. Jacqueline was recently seen in the film Ram Setu.

The Adult film star turned Bollywood actress is surely one of the sexiest and hottest Bollywood actresses right now. Sunny Leone has come a long way in her career. She started from the bottom and now well and truly has reached the top. Leone has starred in several hit Bollywood item songs and movies. She has also worked as the main lead in a thriller web series on MX Player. There is no one who would deny that she is not a hot Bollywood actress. She continues to achieve new levels of stardom in the industry with her talent and skills.

Yami Gautam is a self-made star in Bollywood. The girl from the mountains has made a place for herself in Bollywood. She often features in the list of hot Bollywood actresses who are insanely popular among Indians. Yami recently surprised everyone with her brilliant performance in the thriller A Thursday. She shouldered the movie on her own and the result was extraordinary. She is one of the most skilful actresses in combination with being one of the sexiest Bollywood actresses. Yami has more than 16 million followers on Instagram.

Bollywood’s sweetheart Kiara Advani has to be on every list of hottest Bollywood actresses. She is currently the most popular Bollywood actress along with the likes of Alia Bhatt and Deepika Padukone. Kiara’s role in Shershaah, Bhoola Bhulaiyaa 2 and Jugjugg Jeeyo was highly appreciated by the critics. Kiara’s hot and sexy avatar in Lust Stories received equal praise from everyone. There are a lot of rumours about her marriage with Sidharth Malhotra and believe us she will definitely break millions of hearts if she indeed gets married to him.

Last but not least on the list of hottest Bollywood actresses is Shraddha Kapoor. She recently appeared in the music video of the song Thumkeshwari of the upcoming film Bhediya and everyone was blown away by her hot and sexy figure. We have no doubt in declaring that she is the most popular sexy and hot Bollywood actress of the new generation and her popularity will continue to rise with every movie of her.

Do the names of Sunny Leone and Nora Fatehi cross your mind when you read the words hottest...
Entertainment

Esha Gupta is a hot and sexy Bollywood actress who is known for her bold avatars. The actress,...
Entertainment