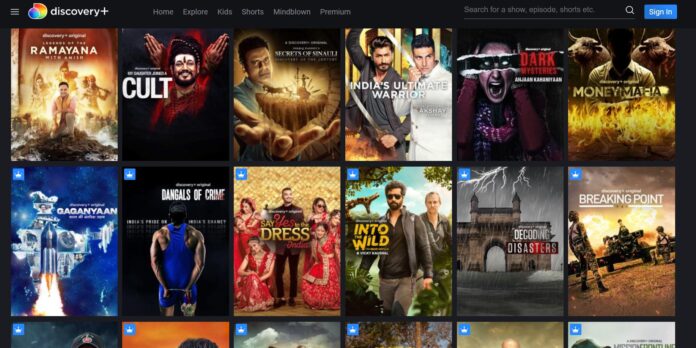 Discovery+ is not among the most popular OTT services in India. However, the streaming service packs a variety of series on its platform. Discovery+ shows are available in 8 languages and have more than 40 genres, including survival, food, investigation, lifestyle, wildlife and more. The famous based on solved mysterious murder cases on Discovery+ are a treat for the viewers. However, most people in India might be unaware that the OTT platform now harbours more than 70,000 episodes in its vast library. The best Discovery+ shows are definitely binge-worthy for their unique and quirky concept that you won’t find anywhere else. With so many episodes available from a ton of series, you would definitely find yourself confused about what to stream first from the discover channel series. Worry not, cause we have covered the best Discover+ shows that you should try in this blog. But before we begin, let us share a significant and exciting detail you will be delighted to hear. Discover+ has one of the cheapest subscription plans in India. You can get access to their premium content for just Rs 199 per month. Don’t you think it’s a good deal? Then we have another exciting offer to announce that will blow your mind. For just Rs 399, you can get the Discovery+ premium for a year. So, what are you waiting for? Hurry up and get a subscription for the best Discovery plus shows that definitely deserve a watch.

Here are the best Discovery+ shows you should binge-watch:

1- My Daughter Joined a Cult

One of the best Discovery+ original shows that you can stream on the OTT platform. It is based on the story of self-styled godman Swami Nithyananda. The series reveals some shocking truths that will shake your core. It is perhaps the most popular web series currently streaming on this OTT platform.

This Neeraj Pandey directorial takes the viewers on an exciting and worthwhile journey. Manjo Bajpayee plays the narrator of this show that uncovers the mysteries behind the excavations of Sinauli.

Those who love investigation and mystery shows will definitely adore this Discovery+ original. It is a thrilling series that tries to establish the reasoning and find out the root cause of some of the paranormal activities in different parts of India. Sounds exciting, isn’t it?

Did you love watching the 1992 Scam: The Harshad Mehta Story on SonyLIV? If you did, then you will fall in love with this series that chronicles 8 of the most shocking con stories in India. The exciting turn of events unveiled in the series makes it one of the best Discovery+ shows.

5- Into the Wild With Bear Grylls

Bear Grylls, the famous survivalist, is one of the best-known personalities that became famous with his show Man vs Wild on the Discovery channel. Into the Wild With Bear Grylls on Discovery+ is something you just can’t miss. In this series, he goes on adventures with famous celebrities like Narendra Modi, Vicky Kaushal, Ajay Devgn and more.

The recent floods in Assam have made us again question the preparation of the Indian government to deal with the natural calamities. Decoding Disasters is a poignant show that tells the effects of disasters from the viewpoint of victims and rescue workers. One of the best Discovery+ shows that will make you teary-eyed.

Discovery+ has one of the most unique libraries of shows where you get to witness things which you never thought would happen on camera. Mission Frontline on the OTT platform is a show in which Bollywood actors like Farhan Akhtar, Rana Daggubati and more train for one day with the Indian armed forces.

The case of Commonwealth medal winner wrestler Sushil Kumar brought forward the heinous crimes lurking in the shadow of wrestling in India. This show on Discovery+ is about the criminal underworld that operates and commands the wrestling world in India.

Need a break from all the thrillers and serious dramas? Watch this show on Discovery+ that pairs Bollywood celebrities like Kareena Kapoor Khan, Anil Kapoor, Janhvi Kapoor, Ananya Pandey, Nora Fatehi and more with professional chefs. These celebs try to cook a meal for their loved ones with the help of chefs in the series.

10- Oggy and the Cockroaches

The best Disocvery+ Kids shows are filled with fun and laughter. Oggy and the Cockroaches is one of the most popular cartoons shows that is now available on this OTT platform. One thing is for sure Discovery+ is for people of all ages.

TVF has announced a collaboration with the OTT platform Zee5 and there is some exciting news in the...