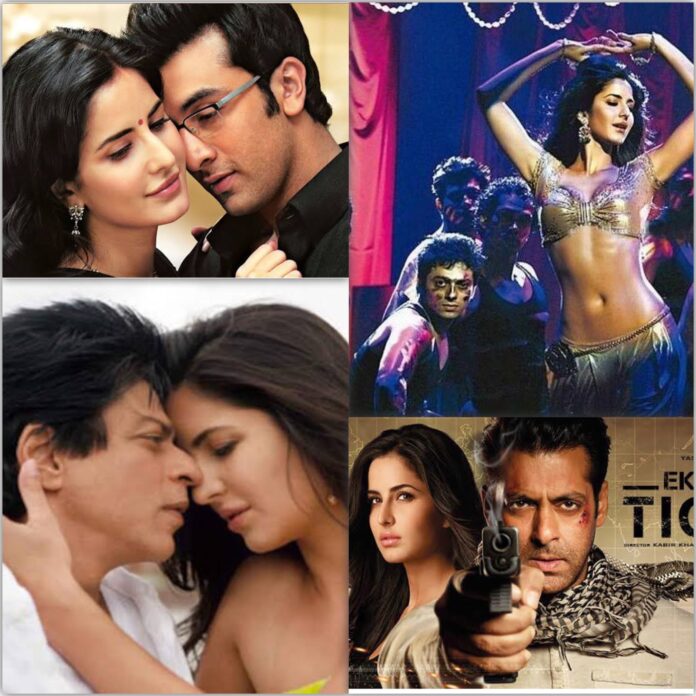 Katrina Kaif has ruled the hearts of her admirers since her debut in the Bollywood big leagues in 2004 with the film Boom. Nevertheless, the movie that launched her career was Maine Pyaar Kyun Kiya, in which she co-starred with Salman Khan. During her profession, Katrina Kaif appeared in several movies that her fans admire. Katrina captured the audience’s emotion with her belly dance in Sheila ki Jawani’s song from the movie Tees maar Khan, although the movie didn’t earn fame. However, after that belly dance people started recognizing her with Sheila. So Flickonclick has summarized the list of best movies featuring gorgeous babe Katrina Kaif.

Katrina’s persona had an astonishing transformation in the political drama. Katrina seems to have thrown her heart and spirit into the film, going from a girl who is utterly in love with someone to a woman who is an ambitious politician, and we were in awe of her portrayal. Interestingly, while several known actors played crucial roles in Raajneeti, Katrina’s performance was rather amazing.

This romantic tale was noteworthy for various reasons. Jab Tak Hai Jaan was the final film directed by Yash Chopra and Katrina’s first work with the King of Romance, Shah Rukh Khan. Their relationship in the film was fantastic, and we couldn’t get enough of her as Meera. In the film, Katrina and Shah Rukh reinvented love, implying that loving each other does not necessarily imply being together, but rather having the fortitude to be apart for the sake of their partner’s well-being.

In this rom-com, Katrina was first seen romancing Ranbir Kapoor. While their chemistry was an unexpected smash in Ajab Gajab Prem Ki Gajab Kahani, Katrina’s girl-next-door appearance and portrayal of Jennifer’s innocence struck a chord with our emotions. Her skills made it hard for us to shift our gaze away from the screen.

This fast-paced romantic comedy follows the life of orthopedic surgeon Samir, who conceals his marital status to keep ladies at bay. When Sameer eventually finds love with Sonia, he is compelled to create a fake wife and fake divorce to marry the woman he loves. Katrina Kaif’s vibrant and cheerful character in the picture won hearts, and the onscreen romance between Sonia and Sameer helped propel the picture to commercial triumph. Maine Pyaar Kyun Kiya is available to stream on Amazon Prime Video.

Although the film garnered a mediocre rating at the box office, Katrina was recognized for her portrayal. The diva portrayed a free-spirited girl who loves to live her life her way. She was carefree, impulsive, and courageous enough to follow her passion. Many of us identified with her at each stage, which was a win scenario for Katrina.

Katrina has always played cheerful or intense parts on the big screen. She transformed people’s perceptions after playing an ISI agent opposite Salman Khan in Ek Tha Tiger. Not only did their relationship win a million hearts in the film, but Katrina’s action mode elicited jaw-dropping reactions as well. And who can forget those stunning kohled eyelashes in the tune ‘Saiyara,’ which made us fall deeply in love with her?

Namastey London, produced and filmed by Vipul Shah, is an award-winning romance Bollywood thriller starring Akshay Kumar and Katrina Kaif. Katrina portrays Jasmeet, whose career includes a lot of drinking and dating, much to her father’s chagrin. During a journey to India, she is wedded off to Arjun (Akshay Kumar), who is truly in love with her. However, the wedding has no meaning for Jasmeet. The movie won three major honors and wowed Indian viewers with great showings.

Singh Is King is one of the best 2008 comedy movies featuring Katrina Kaif about the adventures of Happy Singh (performed by Akshay Kumar), who travels to India in quest of a buddy and instead meets Katrina Kaif. Box Office India called it a smash hit.

Katrina’s personality Laila has been the ideal girl for anyone to have in their lives. She masters the art of being in the present and thriving in the present. She taught us to live in the moment, to value every minute we have, and to constantly follow our hearts. Her hot connection with Hrithik Roshan was also noticeable in this Zoya Akhtar-directed film.

The trailer for the much-awaited film Shamshera starring Ranbir Kapoor has been released, making everyone curious to watch...
Entertainment