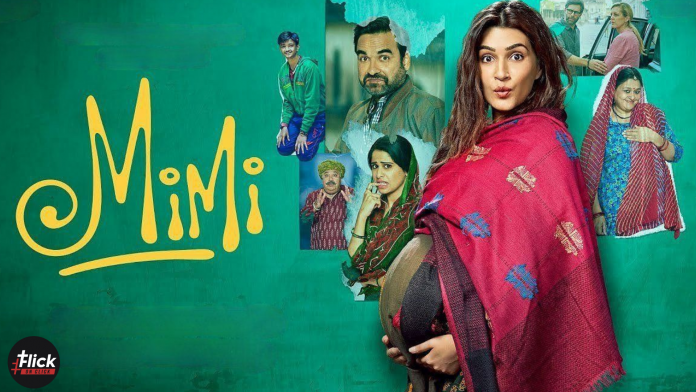 Mimi is yet another latest victim to piracy. Bootlegged copies of Mimi in full HD and 4K, have emerged on various pirate sites and telegram chats on Monday. The film was to be available to stream on Netflix starting July 30. But the movie was pre released on Netflix.

Based on the acclaimed Marathi film ‘Mala Aai Vhhaychy!’ by Samruoddhi Porey, Mimi is skilfully adapted by Laxman Utekar. He along with screenwriter Rohan Shankar ensure the Hindi film has its own character and identity while retaining the essence of the original.

The infusion of situational comedy may oversimplify surrogacy in the opening portions to extend its reach to the masses.

Mimi has seen a heartwarming response to it. The entire cast has been praised for their performance.

The best part about the movie is that with a good laugh you will also be taking a good message along with you once you have watched it.

According to critics, it is a must watch movie with not a new but a very good story line,superb acting by Kriti Sanon and Pankaj Tripathi ,followed by other cast and crew with lots of comedy and a lot of emotions. It was given a rating of 8.4/10 by IMDb. It also has mixed reviews but an overall fun watch as most of them convey.

More about The Film

Directed by Laxman Utekar, Mimi also stars Sai Tamhankar, Supriya Pathak and Manoj Pahwa in pivotal roles. The story follows a girl with big dreams and is tempted to fulfill them with the money she gets after surrogating.

The trailer was released earlier this month which revealed that Kriti plays the role of a surrogate for an international couple after she learns she will receive ₹20 lakhs for carrying the baby. However, mid-way into the pregnancy, the couple backed out, leaving Kriti pregnant with the child and Pankaj Tripathi supporting her

You will hear some pleasant and fun songs such as “Padam Sundari” and “Rihaayi De” in the movie which are by everyone’s favourite A.R. Rahman.

This movie is a feel good comedy full of surprises!

Statements by the Film Creators

Producer Dinesh Vijan spoke about the early release on an Instagram Live session. As reported by Indianexpress.com, he said that the early release is a birthday gift to Kriti. The actor celebrates her birthday on July 27. “Like babies are born premature, our film can also come early,” Dinesh stated.

Binge watch this and follow the different twists and suspenses in Mimi’s life. It gets you thinking and interested. Surrogating to fulfill your dreams, quite a story, isn’t it?
Stay tuned for more!

The weekend is here and we're confused which movies to watch or a show to binge-watch, there are...