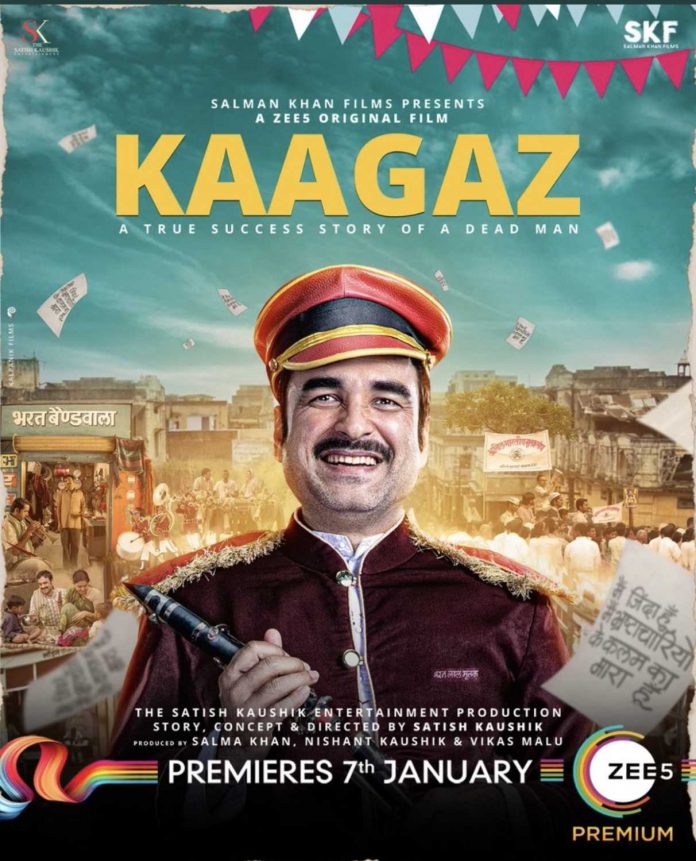 Satish Kaushik’s latest film Kaagaz starring Pankaj Tripathi, is based on the struggles of a common man fighting against the system which pre-exists for centuries.


Based on the life story of Lal Bihari Mritak, this movie is now streaming on Zee5 Premium and a few select theatres in UP.

Pankaj Tripathi has given a phenomenal performance in this movie, and his understated style of acting by demonstration has been flaunted well in the scenes.

Managing both roles of Pankaj Tripathi and the wedding bandmaster, he does it all in stride without letting the pressure get to him.


Adopted from the life of Lal Bihari Mritak, one who fought against the system to prove that he’s alive, when the system declared him dead two years ago.

Bharat Lal, that is the name of Pankaj Tripathi’s paper bandmaster character’s name, is declared dead officially as a part of the scheme plotted by his family for their personal gains from his death. Struggling to reverse this mishap, this man is surviving by the last thread of sanity left.

The movie which is co-produced by Salman Khan’s SKF, features a poem read by Salman himself. The movie doesn’t emphasize the time period of the incident, rather the struggles of every common man against the system built by others who don’t tolerate letting others thrive.


It highlights the political system which doesn’t believe in letting the majority vote, but chose to remove numbers during election periods.

Bharat Lal sets out to unite other such similarly wronged people, who were declared “officially dead” and plans to start a movement to reclaim their right.


What started out as something that made him the joke of the town eventually turns out to be a serious issue as his incessant tries to make the officials believe that he’ss still alive.

In a later scene, Bharat’s lawyer and a journalist meet the Chief Minister to notify him about Bharat’s plight. The behaviour of the CM highlights the condition of the ones in power in our country.

With short cameos from Mita Vashist and Brijendra Kala, Satish Kaushik is seen playing an extended role in the movie. Showcasing the struggles of a common man. With a great cast, and amazing acting by Pankaj Tripathi, Kaagaz is definitely worth watching.