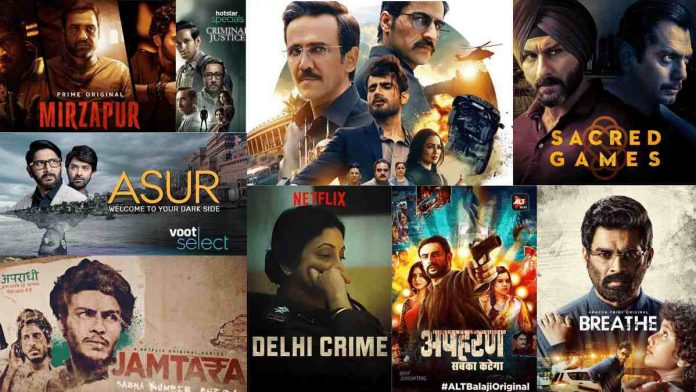 2020 was the rebirth of Indian art and cinema. This year gave audiences not one but so many gems in the form of web series that it left the audience not only astounded but in awe. Filmmaking took a long-awaited step forward in the arena of creativity and storytelling. With new talent emerging in the field of actors and actresses. The story was also given as much importance as it needs.


Despite this year being straight out of some utopian movie, it left the lovers of art and cinema satisfied but satiated for more content that would give them all the reason to go binge-watching till the morning.

Bandish Bandits is a musical saga that you wouldn’t think you would love but you’ll end up falling in love with it. Honestly, the trailer doesn’t give you much of the story except some cliches. So you watch it because everyone is watching it until you started falling in love with all the characters and their mundanity. No one was special but everyone had a special place in the show. A family drama with lots of drama, love, and forgiveness. Isn’t forgiveness the root of the family?

Sushmita Sen made a long-awaited comeback after decades and it left everyone speechless. Aarya is another Indian adaptation of a foreign series, so what do you expect? Nothing great, right? Until you complete a series in one sitting. The story brings together the new aspect of storytelling with characters that are not so often shown in a web series or let alone a movie. Aarya is the result of brilliant storytelling with remarkable acting.

Panchayat is a light-hearted comic drama that hits right in your heart. Where Jitender wins the heart of the audience again with his gripping performance but the story was no less short. The show was not only funny but also relatable. The messages conveyed are not only progressive but also practical. It creates a world that blurs the line of rural and urban altogether.

Delhi gives art a platform that doesn’t seem questionable. As a backdrop, Delhi seems to always do justice to the vilest acts of humankind. Thus, Pataal’s look did the same. It took us into the heart of our life and make us question things that seemed normal to us. It brings civilization and cinema together and molds into a universe that we are actually living in today. Shocking? But it’s the reality we have turned our back too.

Scam 1992 is basically one of the top web series of 2020 that skyrocketed the efforts of the making of Indian web series. Despite the story being nothing new to know but it still manages to leave the audience in love with every cast of the show. It gives the spotlight to new deserving actors but also a glimpse of what a great ensemble of the cast can do to a story. The story gave you the taste of everything, where you start rooting for Harshad Mehta in the beginning and by the end of it you don’t know what to feel. And when the last episode’s credits roll you find yourself humming its title track.