The OnePlus Nord 2T has been introduced in India for less than Rs 30,000, which is already crowded with some excellent options from various brands. Among these are the Samsung Galaxy A52s and the iQOO Neo 6. The new OnePlus smartphone is an all-arounder that offers nearly all of the features that a consumer would be searching for in the Rs 30,000 price range. But how does it stack up against other flagship phones in the same price range? Flickonclick will solve all your confusion, Continue reading to discover out.

The Samsung Galaxy A52s features a straightforward design. People who favor a straightforward, clean appearance over complex rear panels with a rainbow finish would appreciate this device. With minor visual variations, OnePlus offers the same designs on most cheap phones. The Nord 2T’s back camera module is composed of two large circles that house three camera lenses. The iQOO Neo 6 is offered in two distinct gradient finishes: blue and dark. We believe the dark one will be a preferable choice for many people. The three handsets all feature a punch-hole touchscreen and dual loudspeakers.

One of the greatest screens is found on the iQOO Neo 6. It has a high-end E4 display with a refresh rate of 120Hz. This one sports a 6.62-inch AMOLED FHD+ LCD with a high brightness of 800nits, allowing for excellent sunlight legibility. The gadget is even HDR 10+ certified, allowing users to enjoy high-quality HDR material.

The OnePlus Nord 2T also has a decent HDR10+ display that measures roughly 6.43 inches in size. The AMOLED panel refreshes at a rate of 90Hz. Corning Gorilla Glass 5 has been used on the panel to provide further safety against unintentional harm. However, unlike iQOO and Samsung, this one supports the lowest brightness settings, which implies that the display of this smartphone will be less visible in direct sunlight. 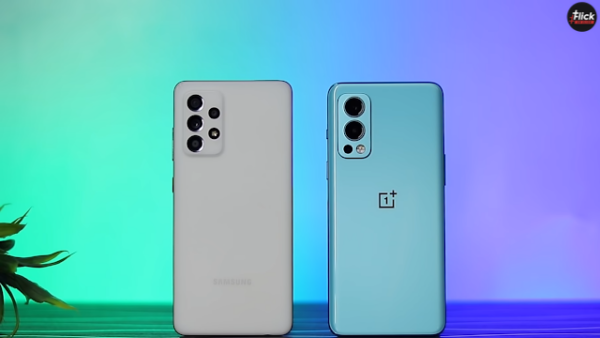 Although the OnePlus Nord 2T features a new MediaTek Dimensity 1300 processor, customers will experience performance comparable to the old Nord 2 device. The Snapdragon 778G chip powers the Samsung Galaxy A52s. Both the Samsung and the OnePlus will provide roughly the same speed quality. So you don’t need to be concerned about the speed portion. The iQOO Neo 6, on the other hand, has a more efficient Snapdragon 870 SoC. Consumers will enjoy superior gameplay with this gadget than with the other two.

Both the OnePlus Nord 2T & the iQOO Neo 6 omit a microSD card slot, preventing users from expanding internal memory and forcing them to rely on cloud-based storage solutions such as Google One and DigiBoxx. The OnePlus Nord 2T has a triple rear camera configuration, featuring a 50-megapixel Sony IMX766 main camera with OIS. It has an 8-megapixel super-duper camera as well as a 2-megapixel tertiary lens. A 32-megapixel cam with EIS (Electronic Image Stabilisation) capability on the front captures stabilized movies.

On the back, the iQOO Neo 6 boasts a tri-camera arrangement that combines a 64-megapixel OIS main camera with a GW1P lens, an 8MP Wide-angle sensor, and a 2 mp sensor. For photos, there is a 16-megapixel sensor on the front.

OnePlus has done well by including an 80W charging station in the package because the company knows that the newest fast charging technology will certainly draw a lot of customers who don’t desire their smartphone to power faster?

Fans of Samsung may be upset to learn that the Galaxy A52s does not come with a fast charger and only comes with a 15W charger. It does, however, enable 25W recharging, for which you will need to purchase a separate adapter. This is still far less than what the competition gives clients in the Rs 30,000 pricing range.

The iQOO Neo 6 comes with an 80W quick charger, just like the OnePlus. The iQOO has a somewhat larger battery unit beneath the hood, which is a benefit. It has a 4,700mAh battery, but the OnePlus and Samsung smartphones have 4,500mAh batteries.

We have provided you with a detailed and informative comparison of all the three latest handsets. Samsung, Oneplus, and iQOO. Now it totally depends on your taste and preferences which phone is worth buying. Hence, all three phones belong to the competitive price range and almost offer the same features, and software updates. So choose a device based on your priority areas like price, design, and processor, and buy accordingly.

OnePlus Nord 2T was recently launched by the OnePlus at the price of ₹32,600 for the base variant...