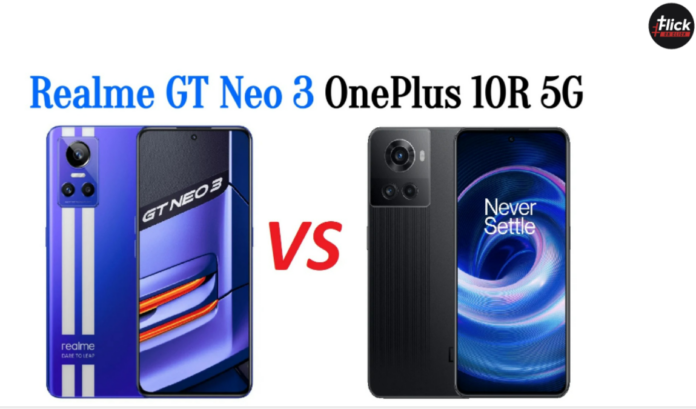 In India, the OnePlus 10R 5G and Realme GT Neo 3 handsets have been unveiled. Both are currently available to buy in the Rs 40,000 price range. Surprisingly, the new 5G handsets from Realme and OnePlus offer similar specifications, making it tough for anyone to choose between the two. Here’s a simple comparison of both cell phones to help you decide which one to buy.

In terms of touchscreen, both devices offer identical specifications. You get a large 6.7-inch 120Hz AMOLED display with Gorilla Glass 5 protection. They have a 10-bit panel with a Full HD+ quality. However, the Realme GT Neo 3 has a higher-touch sampling frequency of 1,000Hz, whilst the OnePlus smartphone has a touch return rate of 720Hz. For a wonderful binge-watching performance, the gadgets offer HDR 10+ certified screens and a sound system with Dolby Atmos capability. These 5G devices do not include a 3.5mm headphone socket.

The backside of the Realme mobile features a “Racing Stripe” pattern that symbolizes performance and power. The other smartphone has lines on the back as well, but it isn’t as spectacular as the Realme. If you want a clear back surface, the Realme GT Neo 3 in black is also available. The arrangement of the rear cameras on both devices is very similar. Because both phones have a punch-hole OLED display, it may be difficult to tell them apart from the front. The OnePlus 10R has a boxy shape that is reminiscent of the iPhone 13 series.

The OnePlus phone is powered by a modified MediaTek Dimensity 8100-MAX SoC, but the Realme GT Neo 3 is powered by the normal version of this processor. Because they both have the same CPU specifications, one will most likely outperform the other. For biometric security, both phones contain an in-display fingerprint sensor. Realme’s capacity to measure your heart rate, though, distinguishes it as an intriguing choice. The corporation, however, states that this is currently an experimental feature. The 5G phones come pre-installed with Android 12. 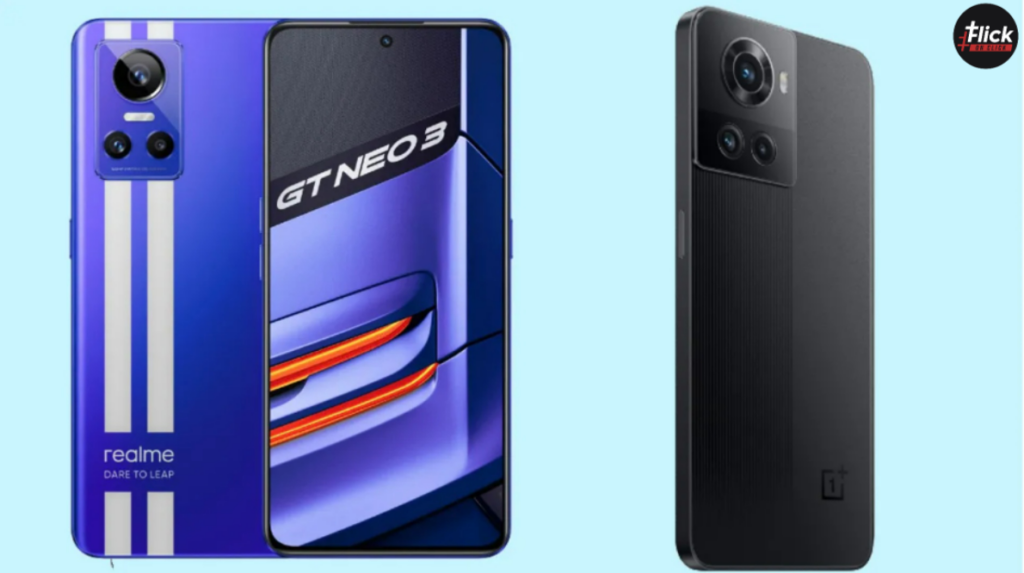 Similarly, there isn’t much of a variation here either. The Realme GT Neo 3 and OnePlus 10R have two batteries and charging options. One has a 4,500mAh battery and supports 150W charging, while the other has a 5,000mAh battery and supports 80W fast charging. The 150W fast charging technology is said to power up to 50% in five min, while the 80W charger takes roughly 32 minutes.

The camera on these phones is likewise comparable. They have a triple rear camera configuration, featuring a 50-megapixel Sony IMX766 main sensor with Optical Image Stabilisation capability (OIS). It comes with an 8mp Sony IMX355 technology as well as a 2mp GC02M1 macro lens. On the front, there’s a 16mp Samsung ISOCELL S5K3P9 camera with EIS.

The characteristics and functionality of both smartphones are comparable. The main distinction is in the design unit. You may quickly make a selection by selecting the one with the finest quality UI. OnePlus has a sleek and smooth UI out of the box, but the Realme GT Neo 3 includes some utilities. The OnePlus 10R will improve and strengthen Android OS upgrades for 3 years and security patches for 4 years. Realme promises only 2 years of Android support and 3 years of security fixes.

Previous article
Everything you need to know about Samsung Galaxy M13 Launch
Next article
Apple iPhone 14: What to expect from Apple iPhone upgrades in 2022
Flickonclick Team

The OnePlus Nord CE 2 5G will be available on February 17, according to the company's announcement on...
Technology

The season for the launch of the new android smartphone is here and with big sales from Amazon...
Offers

One Plus has been quite popular over the years after the launch of its first device and they...
Technology

It is impossible to picture living without the online in the age of the technological age. When the...