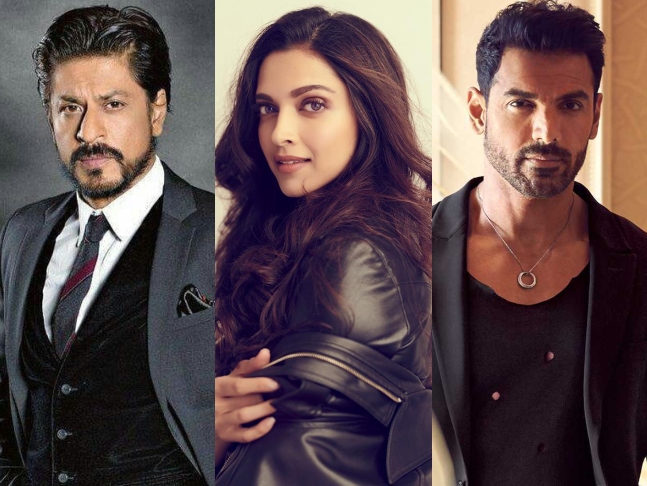 Did you know that the Bollywood actors have started to charge a handsome amount of salaries which is making the budget of Bollywood movies soar through the roof? Some Bollywood actors have started to charge even more than Hollywood celebrities. Shah Rukh Khan’s fees for Pathaan are just too mind-boggling. However, not just his fees, even the other actors, Deepika Padukone and John Abraham, are also taking a huge chunk out of the total Pathaan fees paid to the actors.

Bollywood’s Badshah is returning to the theatres after a very long time. He was last seen in Zero in 2018. His fans have been waiting for one of his movies to release for quite a long time. Looks like SRK has finally heard them as he is back with an action-thriller that will blow everyone away.

Shah Rukh Khan (SRK) is charging Rs 100 crores as Pathaan fees. His massive salary is just too astronomical. It’s even more than what Leonardo Di Caprio charges for his movies.

John Abraham, who is portraying the role of villain in Pathaan, is getting paid a hefty amount of Rs 20 Crores, while Deepika Padukone is taking home Rs 15 Crores as Pathaan fees. The combined fees of these main actors in the movie are Rs 135 Crores which is more than 1/4th of the total budget of the Pathaan produced by Yash Raj Films.

Pathaan will release in India on 23rd January 2022 and will eye big numbers at the box office with the Republic holiday. Salman Khan and Hrithik Roshan, who are part of YRF Spy-Verse, are expected to make cameos in the movie.

Previous articleAvatar 2 Box Office Prediction: Will It Surpass Avatar 1?
Next article33 Hot and Bold Pics of Alexandra Daddario: The 7th One Will Shock You
Virat Verma

There's no doubt about the fact that Deepika Padukone rules Bollywood. She is a hot and sexy queen...
Entertainment

Bollywood is famous for its cheesy love stories in which the hero and heroine fell for each other...
News

During the IPL Auction event on 11th February, Aryan Khan and Suhana Khan filled in for Shahrukh Khan.The...
Entertainment

For Shah Rukh Khan fans, it marks the conclusion of a three-year wait. The actor has just released...
Entertainment