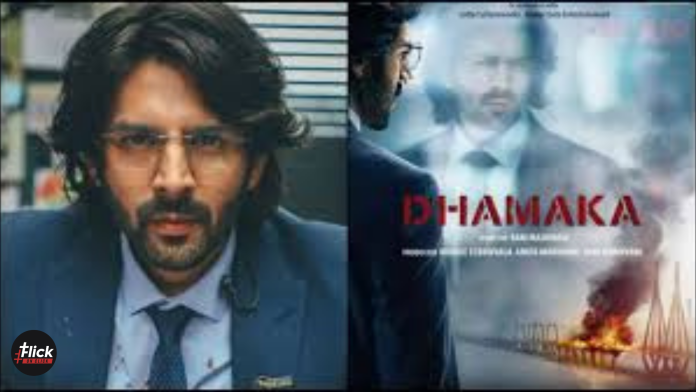 Donning the avatar of a witty ex-News Anchor turned Radio Jockey- Arjun Pathak, Kartik Aryan is back in the showbiz. On October 19, Netflix India released the trailer for his upcoming action thriller Dhamaka, slated for a release on 19th November.


This marks a highly anticipated comeback for the Bollywood heartthrob. “Dhamaka” is set to bring forth a break from his traditional bubbly roleplay in Romantic Comedies, thereby showcasing his versatility as an actor.

Moreover, this movie will undoubtedly play a huge role in breathing some fresh air into Bollywood, an industry that has made Biopics its forerunner.

Here’s all that we got to unpack after watching the latest trailer of Dhamaka!

When and Where can we watch Dhamaka?

Instead of a theatrical release, this film will be digitally released on the leading streaming service Netflix on November 19, 2021.

Cast:
Directed by Ram Madhvani, the new Bollywood flick stars a minimal ensemble featuring Mrunal Thakur, Amruta Subhash, Vikas Kumar, Vishwajeet Pradhan, led by one of the most sought after actors in Bollywood at the moment-Kartik Aryan.

From the get-go, we witness a stark parallel being drawn between the real and reel world. Arjun Pathak, who is seen enjoying his daily source of income as a Radio Jockey, is jolted by an anonymous caller followed by a blast right across his station.

Ultimately he views it as an opportunity knocking at his door and so initiates a chain of reactions by resuming his position as a prime-time host.

This golden chance soon takes a dark turn. The anonymous caller is granted a colossal platform to exhibit his villainous character, putting the whole city’s safety at stake, including that of Pathak’s wife. It soon exposes the corrupt society we live in and the ethical-moral inner voice that helps us distinguish good from evil.

Also Read- Everything you need to know about Hotstar Special Ops 1.5! Trailer released

Pathak’s sardonic humor is soon replaced by his suave brooding self, who is compelled to make life-threatening choices.

Will it all end in his favor? To find out, make sure to tune in to the latest Netflix India blockbuster! So, get your popcorn tubs ready. This year we get to experience the Dhamakedar Diwali season twice!

Previous article
Everything you need to know about Hotstar Special Ops 1.5! Trailer released
Next article
A Tribute To Gunther From Friends: Top 10 Gunther Moments From Friends
Flickonclick

You may want to blame the pandemic this year too. But don’t worry it is our responsibility to...
News

Shehzada is an upcoming action comedy Hindi film starring Kartik Aaryan and Kriti Sanon as the lead. The...