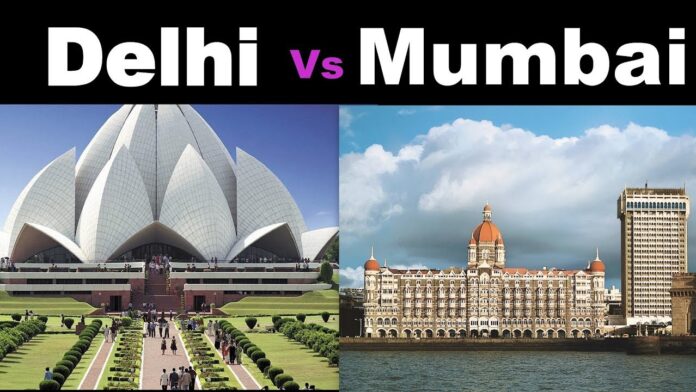 Delhi is India’s political and artistic capital, whereas Mumbai is the country’s commercial and economic center. They are India’s two biggest cities, and while they are comparable in certain aspects, they are significantly different in others, including language, cuisine, history, and weather. While they provide diverse experiences, both are good places to visit if you want to learn about India.

In this post, we will compare Delhi and Mumbai and examine some of the significant distinctions that will help you decide whether Mumbai Vs Delhi is the ideal choice for you.

During parts of their reigns, both dynasties made Delhi their capital city. Both of these kingdoms were Muslim kingdoms, and their rich historic legacy can be seen in Delhi’s old buildings, including the Red Fort (New Delhi), Jama Masjid (Old Delhi), Humayun’s Tomb, and the Qutub Minar.

After a brutal battle and the Siege of Delhi, the British Administration took possession of the Mughal Dynasty in 1858.

The British administration was instrumental in the establishment of New Delhi. In truth, King George V placed the foundation stone, and the site was planned by British architects. This British past is especially visible in Victory Square, also called Vijay Chowk, which houses India’s modern government amid a wide expanse of colonial structures.

Until 1995, Mumbai, currently the metropolis of the Indian state of Maharashtra, was called as Bombay. Prior to then, it was ruled by several indigenous kingdoms until the 17th era, when the British took authority. It was transformed into a major harbor in 1845, which considerably boosted its economy.

Let’s start with Mumbai Vs Delhi in terms of the most popular foods, Chole Bhature and Pav Bhaji, correspondingly. While Delhi residents cannot picture their Sunday breakfasts without spicy chole and fluffy bhature, Mumbai residents will never surrender their crunchy buttery pav with hot potato bhaji. Although there is no similarity between the two foods, the vote usually favors chole bhature, particularly those offered in Old Delhi, because none can offer you more joy than this full plate of excellent cuisine.

If you’ve ever tasted Natraj’s dahi Bhalla in Chandni Chowk, you’ll concur that Delhi offers the finest dahi Bhalla in the nation. The incredibly soft bhallas coated in sweet dahi (curd), green chutney, potatoes, and vinegar sauce create an out-of-this-world delicacy. Nevertheless, pani puri is a global delight, and the sensation of popping the whole puri, packed with khatta pani, into your tongue is unrivaled. So, Mumbai here’s a victory for you.

We’re not even going to evaluate non-vegetarian foods because, hey, Delhi was controlled by the Mughal sultanate, and if there’s one thing they gave us, it was excellent tikkas, qorma, and other meat specialties. As a result, the nation’s capital has an advantage when it comes to serving delectable roomali rolls packed with chicken and mutton tikkas. Apologies, Mumbai, but this one was a foregone conclusion.

Preferences for workouts and Sleepless nights in cities:

Physical activities of many types are gaining popularity, and each metropolis has its own favorite. Individuals in Mumbai, for example, take the lead in weight lifting and dancing. Both Delhi and Mumbai enjoy walking. Whereas the capital city prefers sports, the IT city prefers yoga.

Respondents in metro areas averaged 7 hours of sleep per day. The variation between cities is fairly minor: Mumbai sleeps the lowest (6.97 hours) and Delhi sleeps the one most (7.08 hours), with only a few minutes of variation. Most cities are on pace in quantum numbers. However, commenting definitively on the quality is tough.

Crime Rate in Delhi and Mumbai:

One of the most crucial aspects to consider while evaluating a city is its safety. It is critical to know how secure the place you are visiting is, whether you are a visitor or a citizen. For recorded crimes, Delhi ranks first among the country’s 19 main urban cities, while Mumbai ranks 15th.

Mumbai is India’s most costly city to live in. Indeed, it is the world’s 55th most expensive city to reside in, surpassing Paris and Seattle. Delhi is ranked second in India and 103rd in the world.

This one is easily won by Delhi. Let us not overlook how expensive rents in Mumbai might be. Finding Atlantis, according to tradition, is more probable than finding a property in Mumbai. Even a simple 1bhk in Mumbai might price up to 25K per month. Despite its high price, Delhi outperforms Mumbai.

Read More: Restaurants, Cafes, and Hotels to Open 24 Hours, 7 Days A Week in Delhi After Diwali

5 Best Recipes You Should Try on Thanksgiving 2022

Thanksgiving 2022 is going to be celebrated on 24th November 2022. This year the festival is extra special...
News

Arvind Kejriwal has been taking some pretty serious majors for safeguarding the people of Delhi from the pandemic....
News

Petrol and diesel prices hiked for the "Ninth" time in a row on Monday. Many states have revised...
Fitness

Weight loss has a lot to do with exercising and physical activities but weight loss also is significantly...
Fitness

Several food combinations are difficult to think to be individually consumed like rajma and rice, chole with bhaturas,...
Entertainment

Chefs who can turn even the most absurd of ingredients into something exciting to see and delightful to...
Lifestyle

No matter where you stay, you need fun and adventure in your life. People always want some adventure...