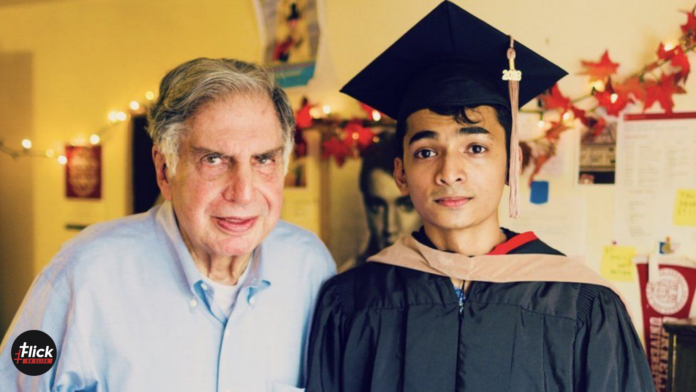 Ratan Tata is a celebrity in the business world, and well we can say there might be a rare occasion when you get to meet someone who doesn’t know him. Not only he belongs to one of the most successful lineups of business personalities, but he’s adorable at the same time. But this time, we’re not talking about him; it’s his assistant and social media guru that has caught our attention. His name is Shantanu Naidu, a 28-year-old guy who’s fast friends with Ratan Tata.

Let’s get to have a sneak peek into the life of Mr. mysterious GenZ, a friend of the business tycoon, to get to know more about the same.

It’s Been 05 Years
Starting a company called Motopaws, which makes light-reflective collars for stray dogs so that they can be spotted in the dark, started it all. As the company got featured in the Tata Newsletter, Shantanu Naidu met the business tycoon.

Also read: Top 7 Companies who have permanently shifted to Work from Home

What started with a few congratulatory emails turns into a special bond very soon, and that’s pretty much it from where it all started.

A Shared Love For Dogs

From what you’ve read above, you know that Shantanu loves dogs, right? But guess what, even Mr. Tata does so, and that is one of the major reasons why they have been bonding so well for the last half-decade.

After getting a suggestion to go for graduation from Cornell University by Mr. Tata, the boy made his mind and got hooked to the idea. The next thing we knew was that Ratan Tata was himself present in the graduation ceremony of Shantanu Naidu. Well! That’s a pretty big thing for a business tycoon to do, don’t you think so, which proves how strong their bond is.

Helping The Old Connect With The New

The way he bonded with Mr. Tata created a butterfly effect where the life of both the gentlemen started to take a curve, and that too for the better, which is what inspired him to start Goodfellow, which is a company that tried to bridge the gap between two generations by establishing a connection between them.

A Book Of Memories

From the day he started meeting Ratan Tata, Shantanu has written it all down and shared his experience with others. It is a fascinating story for others to hear, so all took a very keen interest. Moreover, when the pages of his diary started getting filled, he compiled a book named I Came Upon a Lighthouse: Short Memoir of Life with Ratan Tata.

He is the one responsible for bringing Mr. Tata on Instagram. The man is one of the most active business tycoons on the social media platform, with a whopping 5 Million followers.

Previous article
New Guidelines Out For International Arrivals, Check The Details Now
Next article
10 Gift Ideas to Make him feel special on this Valentine’s Day
Flickonclick

Netflix has a bunch of the best Hollywood movies in Hindi that you can stream right away by...
Offers

Recently, a number of people reported seeing Flipkart offers Disney+Hotstar subscription which at just a mere sum of...
Technology

A plethora of 5G devices are coming to the Indian market even though India's telecom industry is yet...
Entertainment

COVID is now long and short. It has been observed and reported by the office for national statistics...
Technology

Samsung F23 5G: Price, Specs, Features and all you need to Know

Matthew Perry, better known by his Friends' character name Chandler Bing, made us fall in love with him...
News