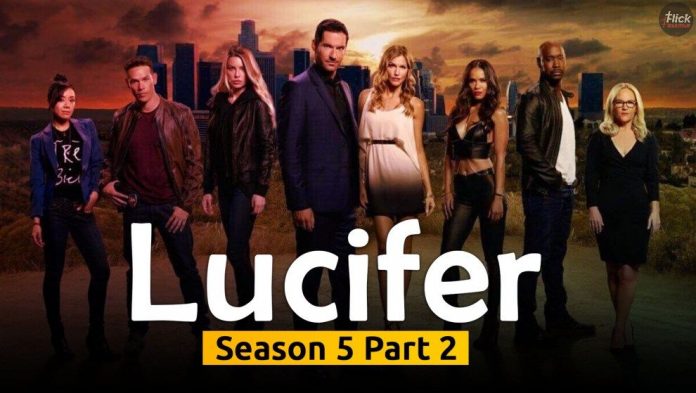 The time has come for Lucifer fans to start jumping off their seats as the Lucifer Season 5 Part 2 is back with a bang. Lucifer has played a crucial role in gaining large popularity for Netflix after the release of its first season and still it is carrying the trend of bringing lots of fans over the OTT platform.

This is going to be a breathtaking moment for the desperate fans as they were eagerly waiting for what will happen next as God has finally marked his appearance on Earth. Moreover, fans are going to witness an epic battle between Michael and Lucifer and see what is going to happen with Chloe as she is stuck in the crossfire.

If you have been following Lucifer so far then you know who Tom Ellis is as he is going to be in the titular role, Tom the show stars Lauren German, Lesley-Ann Brandt, D.B Woodside, Scarlett Estevez, Kevin Alejandro, Dennis Haysbert, and Rachel Harris.

The official synopsis of Lucifer Season 5 Part 2 reads, “In Part B of the stunning fifth season of Lucifer, God himself comes to Earth. Secrets will be revealed, heroic sacrifices will be made, and the world will never be the same.”

Lauren German plays the role of detective Chloe Decker, while Lucifer and Michael are played by Tom Ellis. Dennis Haysbert is the God in the series, D.B. Woodside as Amenadiel, Aimme Garcia as Ella Lopez, Leslie-Ann Brandt as Maze, Rachel Harris as Dr. Linda Martin, and last but not the least, Kevin Alejandro as Dan Espinoza. Alexander Koch will make a comeback as Ella’s new boyfriend.

The first part of the fifth season was left in-between with suspense, but part two will take off from the ending of the first part. In the second part Lucifer’s father, God has arrived on earth as his three sons – Lucifer, Michael, and Amenadiel are having some quarrel with a demon. Later Chloe gets to know that she was the creation of God for Lucifer and that Amenadiel delivered the “gift” ensuring her birth.

Do you believe in signs?

Only seven more days until @LuciferNetflix Season 5B is released! 😈 #lucifer pic.twitter.com/ouwFX5t9k7

What the stars think about Lucifer: Season 5 Part 2?

The first part of the fifth season ended with a brawling action scene about Lucifer and Michael. So, Tom Ellis shared a couple of words on this and said, “The dynamic that it brought to the show and the stuff that we got to do because Dad was there, I didn’t think we’d ever get to that level on this show.”

Co-showrunner, Joe Henderson also said, “Lucifer is dealing a lot with love and his feelings of love revolves around himself and people around him, especially Chloe Decker. God coming down on earth is the most expected and demanding moment of the show. Ultimately, Lucifer has to deal alone with the emotional turmoil he is going through in his life.”

Before being premiered on Netflix, Lucifer was first premiered on Fox in 2016. Somehow, it managed to run for three seasons but soon got canceled as it didn’t get much response from the audience. Later, Netflix lifted the show by picking it up on its own streaming platform, when it got popular the demand for the fourth season was raised by fans.